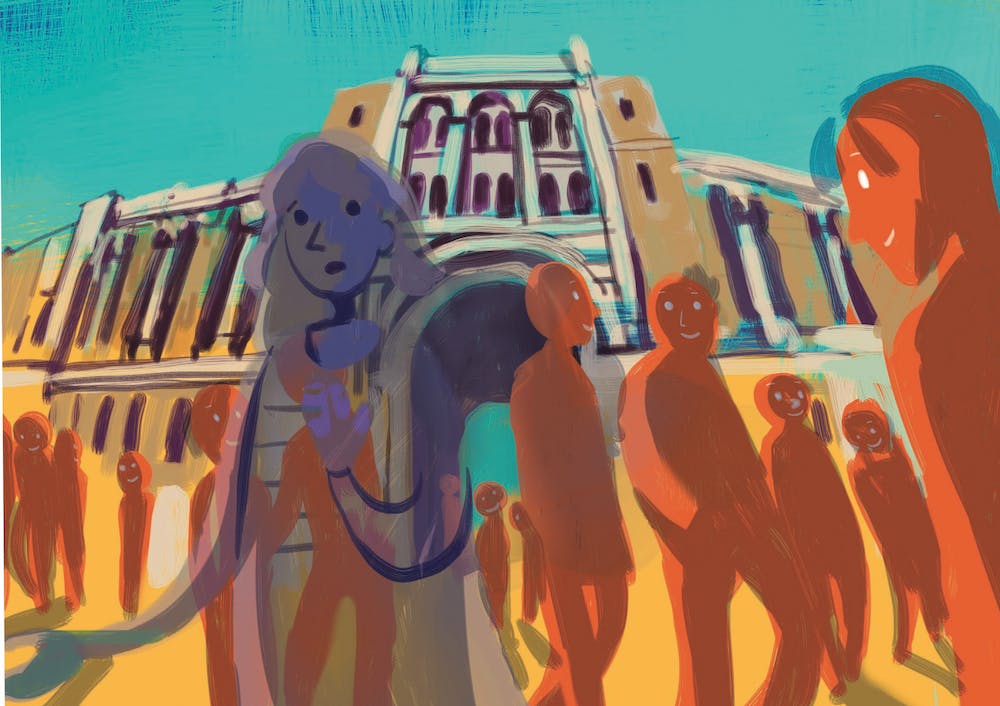 Last semester alone, students wrote over 35 op-eds and letters to the editor, addressing particularly controversial events at Rice and other salient issues facing the student body: from students donning ICE agent costumes to the use of the n-word at Rice to the university’s decision to let a student who was found guilty of assault graduate.

Throughout the semester, students proved that they would do more than just put pen to paper, protesting against the presence of certain politicians and demonstrating in solidarity with sexual assault survivors.

But a dive through past opinion pieces shows that while the campus has not been lacking in passionate students, change seems slow to some.

During the 2018-2019 school year, students asked for safe spaces for Black students in the wake of Ralph Northam’s blackface scandal and called out the pervasiveness of yellow fever on campus. They wanted their classmates to walk the walk at the Houston March for Black Women and to support their peers after sexual assault.

In 2017, opinion pieces covered the same topics. Students asked their peers to not speak for or over marginalized groups, show up to the March for Our Lives and change language during O-Week to promote LGBTQ inclusivity and properly address the idea of consent, The year before: give a voice to low-income students, get out the vote and gear up the discourse on sexual assault.

One can look even further back: in 2014, an opinion about the culture around sexual assault at Rice and another on campus apathy; in 2012, one student tackled Rice’s “happiest students” status head-on, writing about how abuse and struggles with mental health led the Rice administration to push her out of the university.

As students discuss prominent and contemporary issues year after year, many repeat the same language and bring up the same concerns, especially in discussions about Culture of Care.

In 2018, one student wrote, “[W]e pride ourselves on our culture of care; this means we need to be active about supporting and caring for all of our students.” Another wrote in 2019, “Will I finally get to see the ‘culture of care’ that I’ve only ever heard about but never been privileged enough to experience?” And in 2016, “we are told Rice actively works to build inclusive and diverse spaces and a ‘culture of care.’... In practice, we often fail to translate these ideals into reality.”

But more importantly, each of those opinion pieces is authored by, or pertains to, students with a similar story — one of a college experience that wasn’t all that they had hoped it would be. The Thresher spoke to four students about their struggle to feel satisfied with the status quo on campus.

For Alvin Magee, disillusionment started as early as the first week of school. Magee said he didn’t expect the dynamics he encountered during mealtimes.

“It was hard walking to the servery and seeing tables split down race lines almost perfectly,” Magee, a Duncan College senior, said. “As a Black person it was hard since the Black people get split up, and then ... in your college ... if there’s a table of Black people it won’t even be full.”

Nina Lahoti, a Brown College junior who matriculated right before Hurricane Harvey, spoke to the insensitivity of some of her peers when she first got to Rice.

“I had multiple very close friends and their entire families had their houses destroyed [by Harvey] and lost everything and were staying in shelters,” Lahoti said. “But the whole time people were like, ‘Hurricane Harvey did nothing, Harvey Party!’ And I was like, within this 10 mile radius, a lot of people have died. This isn’t fun.”

Additionally, Lahoti said she had been made aware of and was sensitive to her socioeconomic privilege before entering Rice, but noticed that many students at Rice didn’t seem to  try and cultivate that same understanding.

Rice has previously touted its high ranking for “lots of race/class interaction,” but Magee said he didn’t feel as if there was a lot of interaction between groups and that most people, regardless of race, seem to stick with those who are similar to them.

“Interaction and engagement is not the same,” McGee said. “There are quite a few people in my class who are quite wealthy, and I am not. We interact, but we don’t engage.”

Other students talked about the lack of acknowledgment from their peers. Anu Ayeni, a Brown College junior, said she frequently faces this issue.

“People don’t acknowledge you when you’re working in groups,” Ayeni said. “Walking down the street, people don’t move out. I’m expected to move out of their way.”

For Lahoti, interactions with peers in regards to her sexuality have been especially difficult. While Lahoti said outwardly homophobic or transphobic language is mostly absent at Rice, she said that coded language is commonplace.

Lahoti also talked about specific instances in which her sexuality became the focus of the conversation.

“One of the clubs I was in, [at] every social event I was the only girl who was openly out to that group, and it was a majority female group,” Lahoti said. “And so every crawl when we would play a drinking game, it would be ‘Nina, who would you hook up with here? Who do you find attractive here?’”

Lahoti said this kind of behavior creates spaces where some people are uncomfortable while others can’t understand why.

According to McGee, the environment at Rice can sometimes lead students to relocate off campus.

“Even though it’s not the dominant Rice narrative, people know that marginalized students don’t feel at home at Rice,” McGee said. “They move off campus. This is the same thing we repeat over and over again.”

Ayeni said she doesn’t believe that the Culture of Care exists and cites the number of sexual assault cases at Rice as an indicator. Magee felt similarly.

“People just don’t really care,” Magee said. “The general vibe is that ‘I’m not going to … do things to make sure that Black people, gay people, poor people feel supported.’”

Both Ayeni and McGee said they have felt ignored by their peers.

“That's just such a trend here I find,” Ayeni said. “It's just like you enter new spaces, new clubs, new organizations, and people don't approach you.”

According to Ayeni, some students don’t see anything wrong with the current state of campus life.

“Everything just looks perfect,” Ayeni said. “They're seeing it through rose-colored glasses and it's like, it's not the case for a lot of us.”

Ayeni said that she thinks a certain type of person thrives at Rice — those who don’t have to worry about their perception.

“Those that don't have to deal with microaggressions or even blatant prejudice in front of their faces,” Ayeni said. “Those that have faculty that look like them. Those that can do a lot without fear of being punished.”

Another attribute of people who don’t face these challenges is a lack of diversity within their friend group, according to Lahoti.

“If their friend groups aren't diverse and they're at Rice, that's kind of a tell-tale sign.” Lahoti said. “Rice is most likely the most diverse environment any of us will be in after college in the United States. If in this most diverse environment, you're only attracting rich, White, straight people, that might reflect on how you're acting [as a person].”

McGee pointed to issues beyond Rice students, citing the university administration’s attitude as a reason for the current environment.

“What incentive do they have to improve if [Rice is] already number one, while [it is still] shitty?” McGee said. “It’s not lack of care, it’s just hedonistic calculus.”

The spaces at Rice devoted to students are political in nature, according to McGee. She gave the Multicultural Center as an example, saying that its eventual location in the Rice Memorial Center basement even after advocacy from Black faculty and students reflects the values of the administration.

“The marginalized administrators and staff members do more than their fair share,” McGee said.

McGee said that Rice’s current environment could lead some students to choose other universities over Rice.

McGee said that while Rice has stayed the same in a lot of ways, she has seen change since she matriculated four years ago.

Ayeni, for her part, said she has formed great friendships at Rice and has a community at the university.

For McGee, past members of the Black Student Association, of which she was formerly the president, took the initiative to make space for others.

According to McGee, many of the problems at Rice can be solved with a humanistic approach. Her main message is to engage with people as people, but said that it requires a degree of introspection.

Lahoti said that cancel culture can lead to people being intimidated by the prospect of acknowledging their biases, but notes that no one will ever be a perfect person.

“Most people, if they find out that you’re trying your best to better yourself, [are] probably willing to help you,” Lahoti said. She also pointed to the internet as a resource to unlearn prejudices by oneself.

“If you listen to the voices of people of color, of LGBTQ+ people, people of different socioeconomic backgrounds, you can learn to be better on your own,” Lahoti said. “You just have to listen.”