A look back into history: Rice in times of crisis 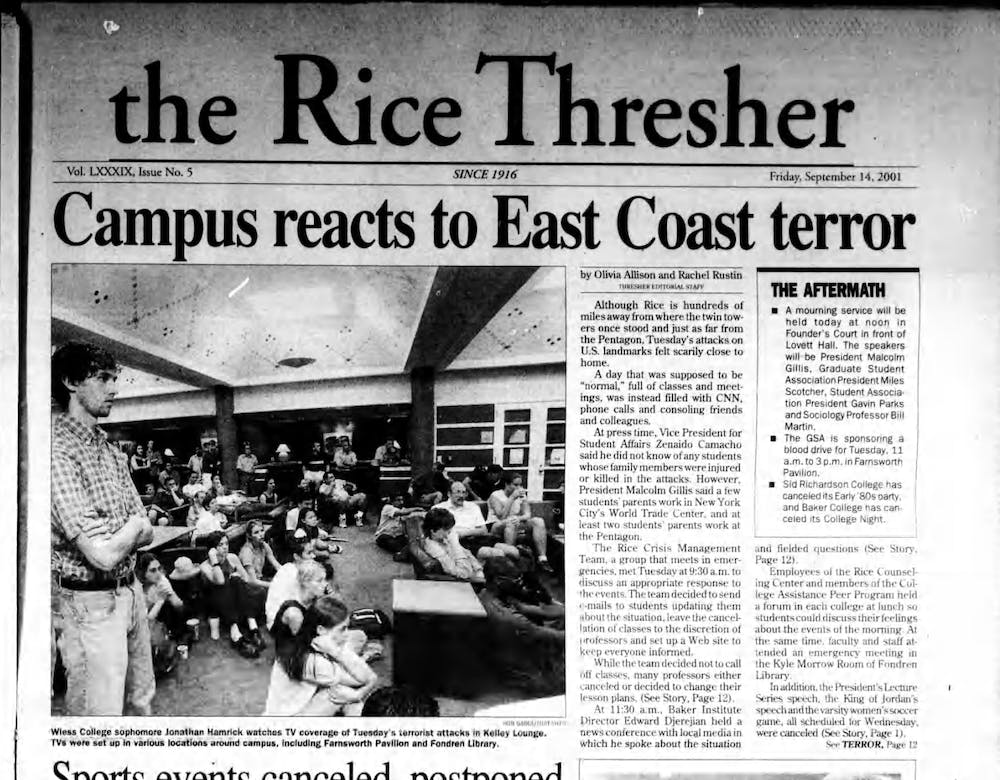 The Sept. 14, 2001 issue of the Thresher, featuring a story on how campus reacted to 9/11. Students watched TV coverage of the attacks in Kelley Lounge, which is now Rice Coffeehouse.

But one thing is not without precedent: Rice has faced crises before. Here is a dig through major moments in history as covered by the Thresher.

At the dawn of the United States’ involvement in the first global war, ROTC programs were established at universities across the country, and one arrived at Rice in the fall of 1917. Many students who participated in the Rice program went on to fight in the war in the fall of 1918, which shrunk that year’s senior class to a mere 33 students. But the ROTC program did more than prepare students for war — it caused chaos on campus, as reported by former features editor and Lovett College senior Elizabeth Rasich in a 2018 investigative feature.

Rice’s ROTC program was harsher than most, and included mandatory military drills for all students while lacking instruction on topics such as cartography, military history and first aid, much to the dismay of students. Despite widespread dissatisfaction, students were denied their rights to petition and assembly under Rule 24, which was established at the same time as the ROTC program. Students at the time said the administration refused to meet with students concerned with the military system, and tried to reduce the influence of the Thresher and prevent the creation of a student association.

In January 1918, an anonymous group of students breached that rule with the publication of “Red Tape,” a satirical newsletter that aired student grievances with the military program, focusing particularly on how it treated women students. A few days later, students partook in a riot the Houston Chronicle described as “open rebellion.” Ultimately, the chaos resulted in the creation of a student association and a student petition to Rice’s Board of Trustees, which suggested a number of changes to the ROTC program. The trustees accepted every student recommendation.

Although the market crash that spawned this dark era in American history happened in October 1929, Rice felt its harshest effects three years later according to the centennial issue of the Thresher, published in 2012. In 1932, faculty salaries were cut by 5 to 10 percent, student registration fees doubled from $5 to $10, and students were required to pay $18 to live on campus for one year.

In 1941, after more than 30 years as president of Rice, Edgar Odell Lovett announced his retirement. Then, President Franklin D. Roosevelt announced that the U.S. would no longer isolate itself from the unfolding world war. Lovett suspended his leave in order to guide the university through the global crisis. The decision was lauded by the Thresher staff in a 1943 editorial.

“Dr. Lovett has exhibited courage throughout his years as president of the Institute, but never as much courage as he showed last year by remaining at his post over Sallyport after he had earned his retirement,” the editorial board wrote.

In face of World War II, Rice militarized once again, stationing 530 men from across the country at the university to receive technical training for the Navy. The editorial board showed great support for these men, expressing hope that they “[would] not feel like strangers for long” in a 1943 editorial. Other editorials from the era included endorsements of the war in patriotic language and criticisms of declining academic quality and lack of school spirit on campus. The Thresher also created a “men in service” section, which featured information about Rice students and alumni serving in the war.

On Aug. 6, 1945, the U.S. military dropped an atomic bomb over the Japanese city Hiroshima, killing an estimated 150,000 people. Shortly after, the Thresher featured Dr. Harold A. Wilson, a Rice physics professor who served as a senior scientist in the development of the atomic bomb. In the same issue, the editorial board — without condemning the bombing — warned of the modern weapon’s future implications. The next issue featured an article on Kermit Beahan, a former Rice student-athlete who was the bombardier tasked with dropping the atomic bomb on Nagasaki on Aug. 9, 1945, killing 90,000. That article, however, did not make the front page. The front page story celebrated the end of the war, featuring a large banner at the top which read “This Is It!”

On Sept. 11, 2001, two planes crashed into the Twin Towers, an event that took almost 3,000 lives, led to an increased sense of fear in the American population and continues to shape foreign policy today. At Rice, students watched the news together, broadcasted on televisions across campus, including Kelley Lounge, which is now Coffeehouse.

Multiple events were canceled and rescheduled, including all Rice Athletics games that weekend. There was particular fear around the Baker Institute; the building is named after James A. Baker III, who was involved in the Desert Storm operation while serving as secretary of state during the Persian Gulf War. Rice University Police Department locked the doors to the Institute that day. Many members of the Rice community headed to blood banks to donate blood in a show of solidarity.

Most notably, Rice chose not to cancel classes — instead, professors were emailed and told that they could “decide what to do.” Some classes, like organic chemistry, carried on as normal, a fact that was criticized in a student’s letter to the editor.

“It’s time for Rice to acknowledge that sometimes no amount of hedges can keep out the real world,” the student, then-Martel College junior Jennifer Canada, wrote.

In late September of 2005, then-Category 5 Hurricane Rita was fast approaching the Gulf Coast — and campus. The administration did not require students to evacuate — in fact, they did the opposite, telling off-campus students to consider relocating on campus during the storm and temporarily housing graduate students in McNair Hall with a stockpile of food. To prepare, Rice spent $100,000 on labor to prepare the campus for the storm, such as boarding up windows at some colleges and sandbagging easily-flooded areas on campus. A lack of kitchen staff — 12 were on campus during the duration of the storm — led to many volunteers helping out, including Ping Sun, President David Leebron’s wife. Housing & Dining also stored 3,000 Meals Ready to Eat and 800 cases of water.

The disaster led to three days of canceled class and the cancellation of many notable events, including a scheduled visit to campus by the Dalai Lama and Families Weekend.

Then-Dean of Undergraduates Robin Forman said that the low impact of Rita on campus made the situation a learning opportunity for crisis management.

“So in some sense, it was a real optimal experience in that we got to put ourselves through a very serious drill on emergency preparation ... without having to go through an actual disaster,” Forman said at the time.

The Great Recession of 2007-2009 was felt at Rice — like now, the university implemented a temporary hiring freeze and asked departments to reduce operating expenses by 5 percent — as a result, the visual and dramatic arts program cut their operating expenses by 24 percent on behalf of the humanities department. The endowment’s value dropped 18.2 percent to 3.61 billion dollars. At the same time, Rice adjusted its financial aid program by increasing its no-loan threshold, meaning more students would qualify for loan-free financial aid during the economic downturn. And all throughout 2009, the recession was alluded to, from opinion pieces to news articles to Backpage references.

The Thresher spoke to Sarah Mitchell (Hanszen College ’09) who graduated into the recession with a degree in art history. Mitchell remembers being concerned about the economy leading up to graduation.

“I remember that only science and engineering students were getting job offers,” Mitchell said. “I went to job fairs and there were no jobs for humanities majors.”

After graduation, Mitchell worked in a doctor’s office for a few years. The job paid $12 per hour and required a high school level of education, Mitchell said. She started law school in 2013 and currently works as an attorney.

“It was tough. I feel like I am still years behind on my career,” Mitchell said. “I have anxiety and depression, and the recession certainly did not help my mental health.”

Mitchell said things are tough right now in the face of COVID-19, but she believes her experience with the Great Recession has made her more resilient for weathering future economic downturns. She advised current undergraduates to take care of themselves in the face of the global pandemic’s effects on the economy.

“The economy ebbs and flows. It will get better. It’s going to be tough for a while, though. If you need it, seek out therapy. Practice self care,” Mitchell said. “You will get through this.”

And of course, Hurricane Harvey — the only crisis on this list that current Rice undergraduates experienced and current Thresher staffers reported on. In 2017, right as the fall semester was getting started, the Category 4 hurricane swept through Texas and Louisiana and brought devastating flooding, destruction and fatality to Houston. Many H&D staff rode out the disaster on campus, and students living off-campus relocated on campus, in some instances requiring rescue by members of the RUPD to make it. RUPD also assisted in rescues across the city, sometimes wading through neck-deep floodwaters to evacuate people. Many students participated in donation and volunteer efforts, which then-sports editor Andrew Grottkau nodded to in his op-ed “Houston: This is your f****** city.”

As a result of the disaster, classes were canceled for a week and sporting events were put on hold. The most severe effects of the hurricane were felt by students from Houston, some of whom lost their homes. To assist students hit hard by the hurricane, the Rice Emergency Student Disaster Assistance program was created to offer financial assistance. The university also involved itself in a number of hurricane research initiatives in Harvey’s wake.

Hurricane Harvey challenged Houstonians to be brave and resilient. In his op-ed, Grottkau wrote that they rose to the occasion.

“If the heroic efforts of Houstonians are any indication, Harvey will do the same to Houston,” he wrote. “Yes, it will take time to rebuild and heal. But when that happens — and believe me, it will — Houston will be stronger than ever before.”