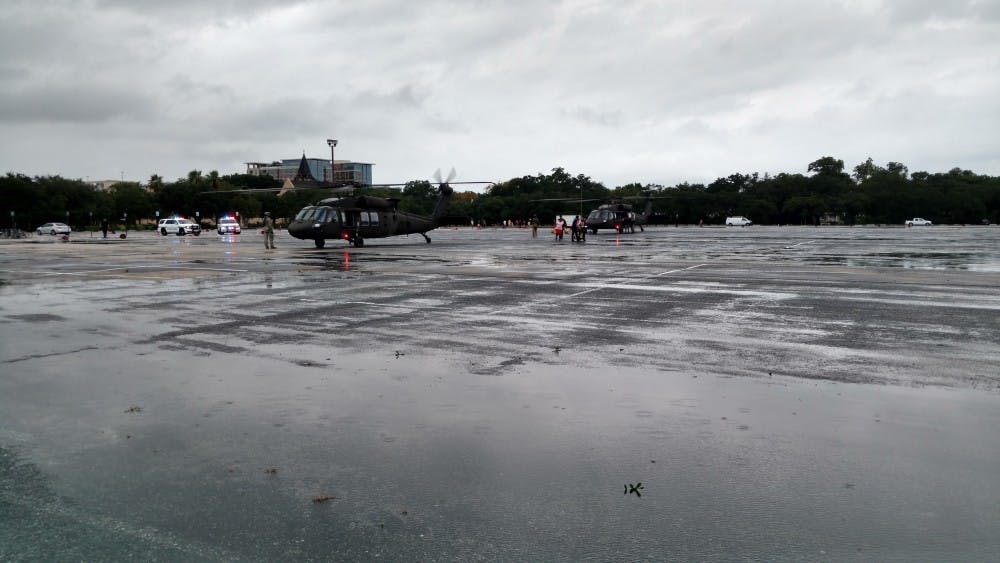 As Houston took on over 40 inches of rain, Rice University Police Department officers received helicopters filled with evacuees from a hospital and a nursing home, and waded into neck-deep floodwaters in student rescues on Sunday, Aug. 27.

“When you see the faces of the folks you’re helping, and how stressed they are, but how they’re thankful, it puts it into perspective for you,” Tate said. “This is why we’re here. This is why we do what we do.”

The officers were tasked with offloading elderly people who required wheelchairs or walkers, as well as those who required hospital care, and transporting them to either the Texas Medical Center or the George R. Brown Convention Center.

“There was a pregnant lady in one of the helicopters, and as I held her hand, I could tell she was very afraid,” Tate said. “She didn’t speak much English, if any at all, but she knew that we were there to help her. It was a good feeling.”

“I thought this was a really cool moment, to see the government, paramedics, RUPD, EMS, all sort of working together towards a common goal that came up only an hour ago,” Cao, a Hanszen College senior, said. “I was definitely very honored to be a part of that and I’m glad that we helped patients get out safely.”

In between rounds of helicopters coming in, RUPD officer Christopher Bick said he was able to take a moment to talk to evacuees from nursing homes who were carrying what possessions they were able to salvage in large trash bags.

“It put it into perspective, how bad everything was,” Bick said. “Just looking at some of them, you just wanted to take their place or take some of that hurt away from them. Because they lost everything.”

As floodwaters reached their highest point on Sunday, RUPD was unable to move their vehicles farther than West Lot. RUPD officers Bick and Gary Evans went on foot to ensure there wasn’t anyone stranded or in need of help and incapable of contacting RUPD. According to Bick, they walked about 15 miles, and were on foot for over eight hours.

“Since we couldn’t get the cars out there, it would’ve left the campus empty,” Bick said. “No one would’ve been able to get to them. So we said, well all right, we need to do something. So we started walking.”

Simultaneously, officer Kenneth Nipe responded to calls and performed routine campuswide checks on the buildings on bike until the water receded enough for the vehicles. According to Nipe, even on a bike with 29-inch tires, the water rose to mid-thigh.

“At one point, you could hardly see anything because of the rain,” Nipe said. “The water was deep and the wind was blowing. So yeah, whether you ended up on the sidewalk or into the deeper water, that was a concern. Other than that, it’s kind of what we do, unfortunately.”

During those periods of restricted vehicle movement, Nipe also coordinated with REMS to deliver medicine to the Rice Graduate Apartments.

“We couldn’t get her to the doctor, so I got to play pharmacist,” Nipe said. “I had to ride my bike over to health services, go into their pharmacy section, unlock it, pull out the right kind of medicine, dispense the pills into an envelope, and bike it over to the RGA. And we got a text later that day that she was feeling much better. That one made the most impact, other than the helicopter.”

Tate said police chiefs nationwide have reached out to him, checking in and offering resources.

“I got a call two days ago from a university chief of police in Florida that I do not know,” Tate said. “He doesn’t have many officers, but he was willing to send two to help me out. He said he was doing it just because they’ve been through hurricanes and he knows how difficult this kind of operation can be. I told him I was okay for now, but just a really heartwarming call to accept.”

Six days after the RUPD officers came onto campus to stay during the storm, other officers were able to provide relief, allowing some of the 14 who had been there since Friday to go home. According to Nipe, as the most senior officer, he was offered the choice to go home first, but deferred it to others who had kids or any known damage to their homes.

“Everything’s good at home and I can weather a couple more days if I need to, but it’s long,” Nipe said. “It wears on you. I’ve been here so long not for any reason other than I like to be at Rice.”

According to Evans, students thanked them at least a hundred different times as they performed their rounds.

“Students actually brought cookies to the police department for us, because they knew we were here 24 hours a day,” Evans said. “It was a good way and a bad way to start off a school year. It lets the students see that we are here for them in their time of need, and dealing with that type of crisis at the same time.”

Bick said students brought a platter of cookies into the police station to thank the officers for their work.

“It was nice, really nice,” Bick said. “Especially that day on Sunday. We changed uniforms and shoes twice, just constantly drenched, and just when you think you’re ready to throw in the towel, they bring in a plate of cookies and it just keeps you going.”