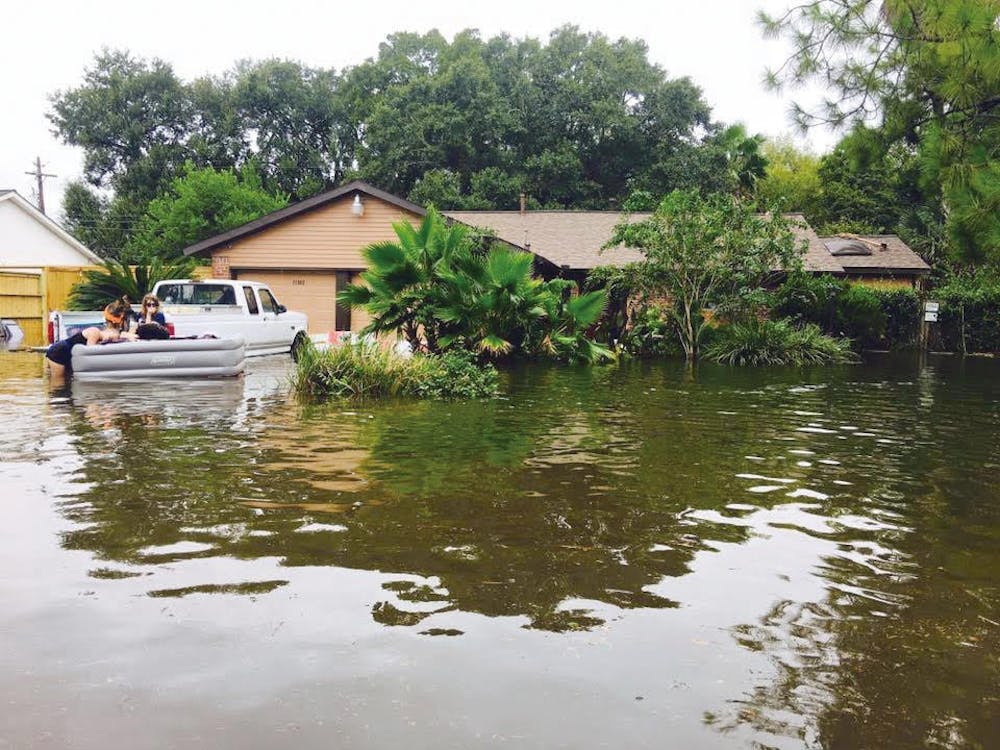 
Off-campus student housing that was flooded during the storm.

Tram Ngyuen’s off-campus apartment is the third home she has lost to a hurricane.

Almost 12 years to the day of Hurricane Harvey, her family’s New Orleans home flooded in Hurricane Katrina. Then, the temporary home she and her family stayed at with five other families flooded during Hurricane Rita.

Nguyen left her apartment on the first floor of a complex and sheltered on campus during the hurricane. Before leaving, she moved everything she could onto chairs and her bed. The McMurtry magisters drove Nguyen home for the first time since Harvey to an apartment that had flooded above the electrical outlets.

“Last time there was no cleanup,” Nguyen said. “Last time everything was gone and you just let the government come in and clear everything out. This time it was really hard to go back. It was just overwhelming to look at what you had and know this is gone.”

Nguyen is now staying in an empty RA apartment at Martel College with five other girls who have been displaced by Hurricane Harvey.

“These struggles make you stronger,” Nguyen said. “At least now I've weathered enough storms to figure out how to move. I've done so much moving in the last week and a half.”

When her new furniture arrives, Nguyen said she will move to an apartment in the same complex but on a higher floor.

“I kept going back to my apartment complex pushing the management to find me a different place,” Nguyen said. “I was very persistent and very stubborn for days. It's almost a fight to get a new place.”

Nguyen said after so many hurricanes she is praying for a sense of calm.

“I've hit natural disaster jackpots so it's time to hit some good fortune jackpots,” Nguyen said. “And yet after all of this I still love the south. I don't think I'm ever going to be able to leave the south. This is home.”

Sam Robedee’s second floor apartment next to Buffalo Bayou escaped the flooding, but not the mold.

“I'm allergic to mold and I also have asthma,” Robedee, a Wiess College sophomore, said. “The first time I went back it was hard to breathe, but then when I went back to get more stuff, it was a lot worse and I couldn't handle it.”

Robedee moved home for two days and drove to campus from his parents’ house, a drive he said took two hours one way.

“It's set me back quite a bit because I was worried about finding housing — [that’s] six or eight hours taken out of the first few days back that I couldn't use for schoolwork,” Robedee said. “Now I’m still trying to catch up so I can have some normalcy in my academics.”

Robedee is staying in an available single in Duncan College for first semester while he tries to figure out his next home.

“That’s pretty stressful right now because we don't know if they'll let us out of the lease or if we'll have to get lawyers involved and everything,” Robedee said. “That's just another time commitment outside of schoolwork.”

Zach Abercrumbia was all the way in Australia with the rest of Rice’s football team when the Hurricane Harvey hit Houston.

“It was was a shock because when we left, I don't even think we knew a tropical storm was coming,” Abercrumbia said. “A day or two into the trip we hear about this tropical storm that's picking up power, and then I kept hearing stories.”

His home, a one story house near Buffalo Bayou where he lived with three other teammates, along with all four of their cars, flooded with three feet of water.

“Being so far and not having control can make you feel helpless,” Abercrumbia said.

With Houston’s airports shut down, the football team flew to Fort Worth, Texas and practiced at Texas Christian University's facilities. When the team finally returned to Houston on Friday, Sept. 1, the first place they went was to Abercrumbia’s home.

“I think we've really grown closer this tragedy as a team and really been helping each other out from just a ride to just someone you can talk to about your problems,” Abercrumbia said.

Abercrumbia lost almost everything in his house but his clothes and shoes. On Monday, he moved to a new apartment with a former teammate. He is sleeping on an air mattress and hitching rides to and from campus. He arrives around 7 a.m. for his early morning workout and classes and stays until 8 p.m. for football practice.

Abercrumbia said he is focusing on football and his schoolwork, not all that he has lost.