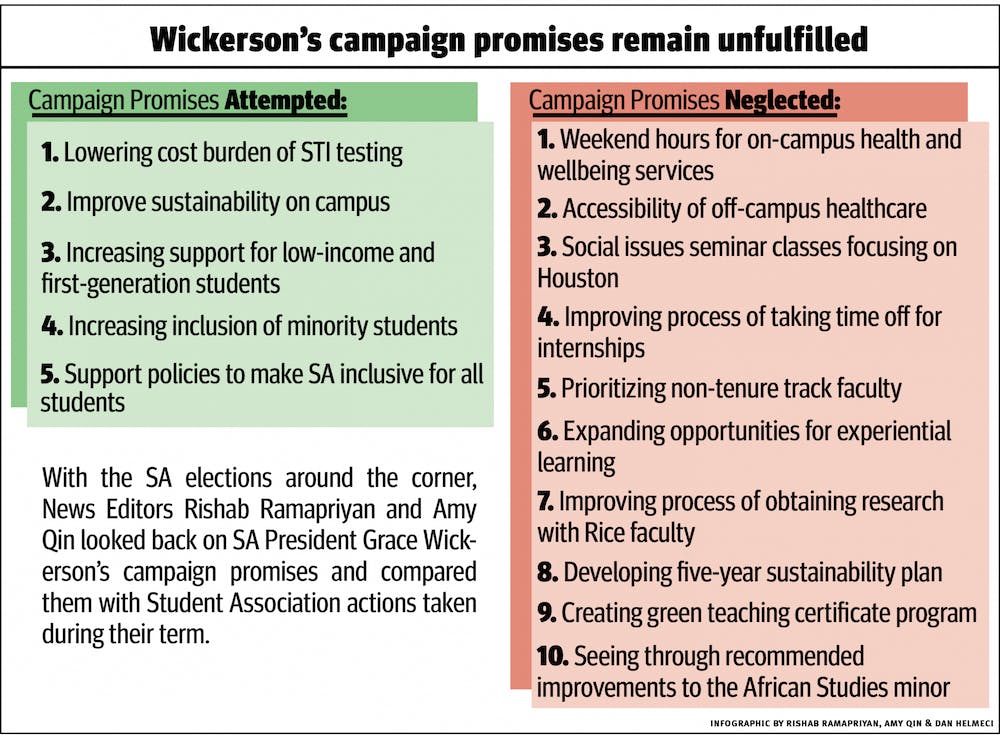 When Grace Wickerson ran for Student Association President in February 2019, they campaigned on a platform of multiple goals falling under the categories of education, student wellbeing, access and inclusion, sustainability and championing student ideas. Based on our analysis, Wickerson has only attempted one-third of their campaign promises.

Referencing Wickerson’s campaign statement, we identified 15 unique goals, noting that some of their goals were repetitive or immeasurable. For example, we did not include Wickerson’s stated goal of “Utilize the student delegates to elevate the voices of students not traditionally involved in campuswide advocacy” because we felt that this goal could not be accurately measured.

To classify these goals as “attempted” or “neglected,” we checked all publicly available SA meeting minutes, presentations and spreadsheets available at sa.rice.edu, in addition to our own coverage of the SA. In order for a goal to be classified as “attempted,” we required there to be recorded actions taken by the SA in pursuit of that specific goal.

For the campaign promises that we deemed as “attempted,” we have determined that the SA under Wickerson’s tenure has made at least one tangible action or plan towards the goal. We briefly outline our reasoning below.

Regarding lowering costs of sexually transmitted infection testing, the STI testing prices at the Health Center dropped to $46 in August 2019; previously, the cost of a four-disease test was $74.

On improving sustainability on campus, Wickerson has started conversations with Richard Johnson, director of the Administrative Center for Sustainability and Energy Management at Rice to propose a Green Investment Fund, a $500,000 fund to support energy-saving utility projects and educational efforts. However, this proposal has not yet been presented by Wickerson.

Under Wickerson, the SA has also worked on initiatives to address the needs of low-income and first-generation students. For example, they helped to set up the Access and Opportunity Portal, a collaboration between the Office of Academic Advising, the Center for Career Development and Student Success Initiatives to fund opportunities for low- and middle-income students. On Monday, the SA and Graduate Student Association issued a joint statement to the Faculty Senate calling for increased and improved resources to support diversity, equity and inclusion efforts, specifically citing first-generation and low-income students and minority students.

Recently, a new initiative allowing students to donate their unused guest meal swipes to students living off campus who cannot afford meal plans was launched by the SA in collaboration with Housing and Dining, the dean of undergraduates and SSI to address food insecurity.

To improve the inclusion of minority students, the SA has launched efforts to standardize diversity councils at residential colleges. In the wake of three students dressing up as U.S. Immigration and Customs Enforcement officers at a Halloween event at Willy’s Pub, the SA issued a Statement of Support for the Latinx and Immigrant Community at Rice. The SA also chartered working groups to examine Latinx studies and African presence in academia.

Wickerson also oversaw a collaboration between the SA and the Office of Undergraduate Research and Inquiry as piloted by the Academics Committee.*

Finally, Wickerson has made steps toward supporting policies to make SA inclusive for all students. Last April, the SA Senate passed a constitutional amendment to allow any student to sponsor SA legislation, which was approved by the student body in a special election. The amendment was co-sponsored by Wickerson and intended to lower the barrier for student participation in the SA Senate.

The above examples are not a comprehensive list of all the actions taken by Wickerson and the SA in trying to complete the promises and goals we marked as “attempted.” On the other hand, we marked campaign promises as being “neglected” if we could find no public documentation of tangible actions or plans taken towards their accomplishment. For example, while the SA passed a resolution calling for improvements to the African Studies minor, there has been no released information that any improvements have been “seen through,” as was promised in Wickerson’s campaign. However, we noted that that the African Studies Committee has made progress in other avenues, such as helping to create the Center for African and African American Studies.