How a series finale made me cry in public

Tonight I bawled while working out on an elliptical machine, and I can only blame perhaps the most bittersweet series finale I’ve ever seen. How I Met Your Mother concluded its nine-season run tonight, and for the first time in about two seasons, I was so unbelievably glad I had tuned in. The last episode dispensed of all the ridiculous antics that have characterized the last season, and instead concentrated on the characters we came to know and love in the first season: teddy bear Marshall, idealist Ted, emotional Lilly, playboy Barney and driven Robin. And yet, somehow, the finale managed to allow the characters to grow beyond their first-season selves while remaining realistic, a quality the show very much needed throughout the past few years.

TV shows that make the cut

As a stereotypically busy college student, I definitely should not watch as much TV as I do. TV shows are my number one vice; new characters pull me in, and plot twists hook me for seasons to come. That being said, even I cannot watch every new show.

I really wanted to like Intelligence. Any show that features a well-known, good-looking actor as a spy figure working to save the world through pure intellect pretty much has me sold even before the pilot airs. Unfortunately, Intelligence falls short in comparison to its predecessors Sherlock and Chuck. While Chuck also told the story of a spy with a computer implanted into his brain, the former show boasted strong characters and a wonderful balance of drama and comedy. In contrast, Intelligence has only flat characters with simple motivations and "complicated" pasts so far.The main character and human-turned-computer Gabriel (Josh Holloway, Lost) works on saving the world while searching for his potentially murderous wife who disappeared five years ago, but I am already convinced he should be with his new handler Riley (Meghan Ory, Once Upon a Time) and therefore care very little about his supposed internal motivation. Riley, meanwhile, is an accomplished former Secret Service agent with a complicated past who unfortunately already revealed her big secret, making me lose interest in her character. While the show features some mystery and some minor characters that could prove to be entertaining, this newbie will have to buff up its characters' plots and pasts before I become interested again.

MARSHLAND depicts the diversity of Houston

Street artist Gaia has transformed the walls of Rice Gallery's installation space into a patchwork of Houston culture with a structural allusion to Rice University at its center in his new installation MARSHLAND, which opened Sept. 26.Three walls of the gallery space are painted with layered images meant to symbolize different parts of Houston culture. Both sides of the mural are flanked with portraits of George R. Brown, influential Houston architects Philip Johnson and John Burgee, and Rice architect Ralph Adams Cram, all historical figures who shaped the Houston landscape. The left side of the mural is overlayed with the depiction of a traditional white marble sculpture which then merges into the modern city skyline, representing the intersection of the old and the new within the city. The cityscape, which was painted using a series of projections, dominates the back wall of the gallery and is a colorful overlay of downtown skyscrapers that wonderfully evokes the complexity of urban development but still only depicts the most prevalent and interesting buildings. Downtown then evolves into longhorns at the back right corner of the space. According to Gaia, these cows represent the herd mentality common in big cities, both among big-business investors and among the general population.These cattle morph into a medley of signs from different neighborhoods in Houston which offer just a glimpse into the cultural and ethnic diversity of Houston."[In this corner,] there's this representation of Houston and the embracing to the new [along with] the grassroots, bottom-up energy and invigoration of the diverse populations that have come to meet [opportunity in Houston]," Gaia said. "All of this comes together with these signs from all over Houston and Bellaire."This concept of the Houston melting pot is furthered by the flock of migratory birds that come next in the mural; they reference the large populations of immigrants that have established their homes in Houston as well as the large populations of birds that actually migrate to the marshlands surrounding Houston.The birds and their habitat are also referenced with the title of the installation, which, according to Gaia, is a reference to the character of Houston."Houston itself is a relatively unattractive place," Gaia said. "[But it's also an area] that's actually extremely robust and diverse. Coincidentally, [MARSHLAND] also references the middle name of the founder of this school."Perhaps the best part of the installation is the effortless detail that exudes from the mural itself; everything from the striking details in the birds' eyes to the layering of spray paint over more traditional portraiture creates a contemporary, modern feeling characteristic of Gaia's work while maintaining the realistic symbolism of the mural.This mural, while almost a complete work in itself, also surrounds a square of colonnades that mimic the arches seen around Rice. Gaia said these colonnades are a direct reference to the architectural decisions of Rice architect Ralph Adams Cram."The arches on this campus demonstrate the Spanish Byzantine reference [Cram] imported into southern Texas," Gaia explained. Portraits of Houston community members hang in the archways within the colonnades. These portraits demonstrate the diversity of Houston and do not only focus on prominent figures. "[The portraits] were derived from interviews conducted with a pastiche of randomly selected individuals from faculty to staff to all sorts of students from many different backgrounds," Gaia said. "Their interviews and stories and insights will be provided in an associated text that informs visitors about the context of these individuals, which will be available in the center of the room."The installation, with the Rice colonnades and portraits at the center surrounded by the eclectic mural of Houston, quite astoundingly captures part of the experience of being a student at Rice; when standing in the middle of the colonnades, it is easy to imagine Rice as the center of Houston itself, despite the glimpses of the much more complex and diverse Houston mural that can be seen through each of the archways. Gaia himself is a recent graduate of Maryland Institute College of Art and speaks very much like an enthusiastic student excited about discovering his subject and material. As he ambles around the gallery explaining his artwork, his mind seems to work faster than he can talk, and he consistently jumps from one philosophical idea behind his work to the next. Generally, Gaia works with impermanent materials and considers himself a street artist, but he said he does not view himself simply as a graffiti artist. Rather, Gaia strives to provide neglected spaces with the artwork they deserve, and he does not consider this work at all criminal."My work is determined by the site that it exists in, whether sanctioned or unsanctioned," Gaia said.Gaia said he is also very comfortable with the temporary nature of his work."It's perfectly fine [that this will get painted over at the end of my exhibition]. Once I'm done with [my work,] I relieve myself of any sort of ego or attachment to it and let go of it," Gaia said. "I'm very comfortable with the fact that most of my work is in neglected space, so it's interesting to see how it changes over time. Once it's done, I would rather it have some sort of interaction. If not with anyone, then at least with the weather."With MARSHLAND, Gaia succeeds in allowing his site to determine his work, as the installation clearly references both Houston and Rice life."[Many people's] initial reaction to Houston is often one of anathema," Gaia said. "But then people become seduced and find something extremely attractive beyond the generally unattractive surface and really become able to find Houston's wonderful diversity."The installation will be open Sept. 26 - Dec. 8. Gallery admission and events are free and open to the public.

100 Days sponsor up in the air

Rice Program Council will not be financing 100 Days this year, according to RPC President Aisha Jeeva.Jeeva, a Martel College junior, said the RPC budget had already been set when the Office of Alumni Affairs made the decision not to plan 100 Days."Our budget has been set since April, when the executive board sat down and planned for the year," Jeeva said. "We really are unable to fund [100 Days] .... It has never been our event, and we have never been linked to it."Jeeva said RPC is choosing to stick to its original plan for its traditional events."We can't change what we're doing, pick up the slack and rearrange our whole year because of something someone else decided," Jeeva said.According to Jeeva, RPC aims to strengthen its planning for Rondelet to revive that event."Our primary goal is to have Rondelet because we've received so many student requests asking for it," Jeeva said.The Student Association, in its effort to find a way for the tradition of 100 Days to continue this year, asked RPC to consider the possibility of planning the event, according to SA President Yoonjin Min. Min said she understands RPC's decision. "I think [RPC] is really trying to revive Rondelet as this pre-Beer Bike event, and they've already bought into this idea, planned for it and are really excited about it," Min said.According to Min, no campus organization has stepped forward to plan the event, and many are worried about the liability that has come to be associated with 100 Days.Min said the SA is not currently planning on being responsible for 100 Days, either.However, Min said the college presidents are working on finding a way to ensure 100 Days will still happen. Min said groups that could potentially host the event include the Future Alumni Committee - independent of Alumni Affairs - and a group of representatives from each college's senior committee.Martel College senior Thomas Plackemeier said he is disappointed that 100 Days has yet to be planned."I think that 100 Days offers seniors a chance to celebrate their collective experiences over the past four years," Plackemeier said. "I'm disappointed that no organization would step up to carry on a Rice tradition [like 100 Days]."Min maintains that 100 Days will happen."100 days [to graduation] will be marked in some way," Min said. "I don't know if the way it has been marked in past years is feasible for this year, but we also still have a lot of time."

By Rachel Marcus and Andrew Ta

The medical amnesty section of the Rice Alcohol Policy was amended over the summer to reflect the prohibition of possession and consumption of hard alcohol by those under 21 announced last semester, according to Dean of Undergraduates John Hutchinson. The Thresher previously covered the changes proposed to the alcohol policy in the spring in its April 19 issue ("Changes to alcohol policy announced"). 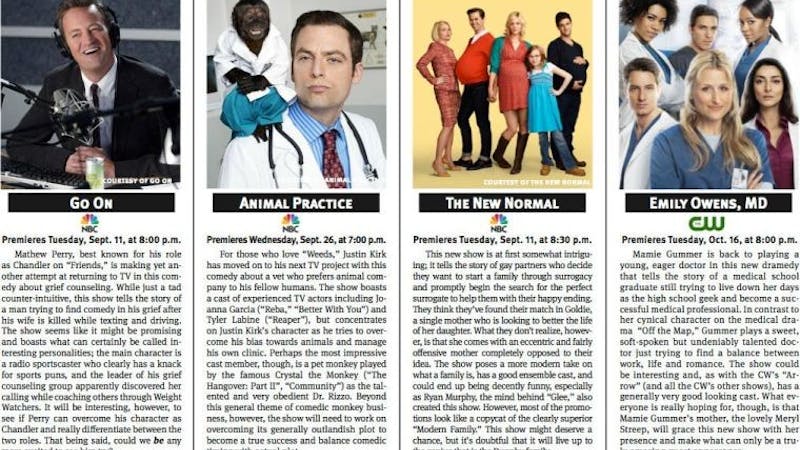 TV shows premiering this fall you definitely need to see