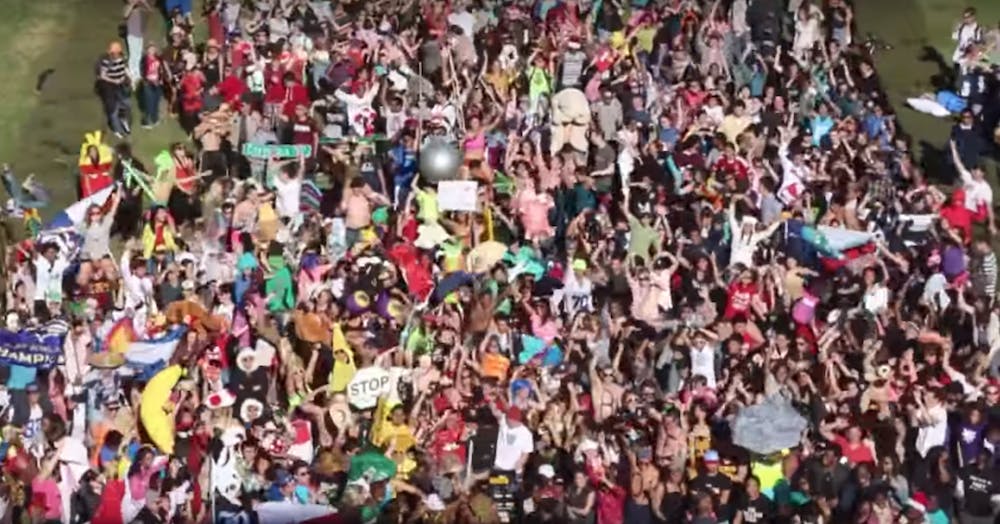 Editor’s Note: This is the fourth installment in “A Decade of Thresher,” a commemoration of another decade of Thresher coverage. Since the Fondren archive does not have 2013 PDFs, I used our online content only (no Backpages were read in the research for this piece).

Content warning: This article links to and describes violence and alleged police brutality.

In February of 2013, over 1,000 Rice students gathered in the Academic Quad to do the most 2013 thing ever: the Harlem Shake. Just in time too, as 2013 was the year that infamous video-platform Vine took hold of popular culture with its seven-second videos. In 2013, indie-rock band Vampire Weekend released their hit album “Modern Vampires of the City and then waited six years to release their next one this year. It was also the year of the game-changing release of iOS 7, which introduced flat icon design and a control center, changes discussed by Thresher staffers.

“Just like all other first-world problems, iOS 7 will take some getting used to,” a staffer wrote.

Worldwide, major tragedies defined the year: South African leader Nelson Mandela passed away, a bombing turned the Boston Marathon into a tragedy and 1,134 were killed in a Bangladeshi factory collapse. At Rice, students mourned the premature loss of two of their own: then-Sid Richardson College sophomore Alex Zhou and then-Sid Rich junior Vivian Guan.

2013 was a year of change at Rice. A definite credit hour cap was set for the first time at a lofty 24 hours per semester (students are now restricted to 18, with some exceptions). Commencement was split into two ceremonies, with an additional undergraduate ceremony on Friday night to avoid the heat of Saturday (this setup is still used).

Following a rash of alcohol-related transports in 2012, the alcohol policy was permanently changed in April, and the verdict was out: underage possession of hard alcohol would not be allowed on campus (and is still not allowed at time of publication). This change was defined and discussed with student leaders at the time, who mostly agreed that it was a necessary adjustment. Still, hiccups were seen along the way, such as when hard alcohol was served at an on-campus Esperanza.

“I was told by the senators that some students have complained about this service, given that the alcohol policy specifically prohibits this. This criticism is entirely accurate and completely understandable: We screwed up,” then-Dean of Undergraduates John Hutchinson wrote in a letter to the editor.

Hutchinson was also active in discussions following a former student’s opinion piece in 2012, which detailed how she felt Rice mishandled her case and forced her to take time off. The opinion piece was followed by a rally and many letters to the editor, culminating in a forum where Hutchinson and then-associate dean of undergraduates Don Ostedik answered student questions about mental health procedures at Rice.

The athletics department saw a sudden changeover of its then-athletics director, Rick Greenspan, after Sports Illustrated published an expose alleging that the exodus of six men’s basketball players in 2012 was partially due to alleged racist comments by Greenspan toward players. Two of the players who transferred had submitted hardship waivers in order to begin playing at their new schools, a special circumstance typically not allowed by the NCAA. In their waivers, they (an Iranian and an Egyptian) alleged that Greenspan made derogatory comments referencing Al-Qaeda.

These allegations were denied by Greenspan, Rice Athletics and Rice Public Affairs — Rice hired an outside counsel to conduct an investigation and found no basis for charge of discrimination. The Thresher reported on the allegations, quoting several anonymous athletes who found Greenspan “sketchy” and noted his complicated history at his previous institution. Greenspan stepped down from the role in June and was replaced by current-Athletics Director Joe Karlgaard in September.

The drama around Greenspan likely clouded what was actually a great season for Rice athletics, led by women’s tennis, who maintained a season record of 21-5. They were followed by baseball and swimming, who won their respective C-USA tournaments. Lastly, football won their second bowl game in 50 years against the Air Force.

Sports Illustrated broke the Greenspan story, and local news channel KPRC broke another major 2013 story: an alleged case of police brutality by Rice University Police Department. In a video that later went viral, RUPD officers are seen hitting a bike thief suspect with batons while he shouts “Why are you beating me?” In a statement, Rice defended RUPD’s actions and said an internal review showed that “officers used the amount of force necessary to overcome the suspect's resistance to arrest.” The actions of RUPD were condemned by then-Senator John Whitmire, who asked that Rice fire the officers involved. The Houston Chronicle later reported that those officers were not found in violation by a grand jury.

The year saw the beginnings of now-popular businesses and clubs on campus, such as the emergence of Chinese restaurant Ambassador’s Cafe and the predecessor to Rice Bikes, Rice Bike Rental. The latter operated out of Sid Rich’s basement (it now works from the garage of the Housing & Dining office). Rice’s Design for America chapter also got its start in 2013, starting with the problem of solving bike theft on campus.

In the meantime, some existing organizations were struggling. Rice Program Council, after not hosting Rondelet for the second year in a row, requested a blanket tax increase of $3 per student (totaling $12,000 increase per year), a request hotly contested by the Thresher editorial board. This resulted in a back-and-forth between RPC and the Thresher, culminating in the Backpage publishing RPC’s previously unreleased budget. Eventually, the $3 increase was struck from the ballot altogether, after RPC representatives unconstitutionally promoted the proposal through colleges’ email listservs.

The Thresher itself changed things up in 2013 as well, beginning to distribute on Wednesdays instead of Fridays in order to increase readership. Some things stayed the same, such as the leadership changeover timeline: outgoing editors-in-chief said farewell in February, whereas nowadays editors stay in leadership until the last issue of the academic year is printed.

In mildly bizarre coverage, the Thresher reported on its own Backpage editor and the result of his dorm transformation: a log cabin lookalike room, complete with custom-installed wood paneling and cabin-themed wallpaper.

"I threw a cabin party where you had to wear flannel to attend, and I plan on more," he said in 2013.