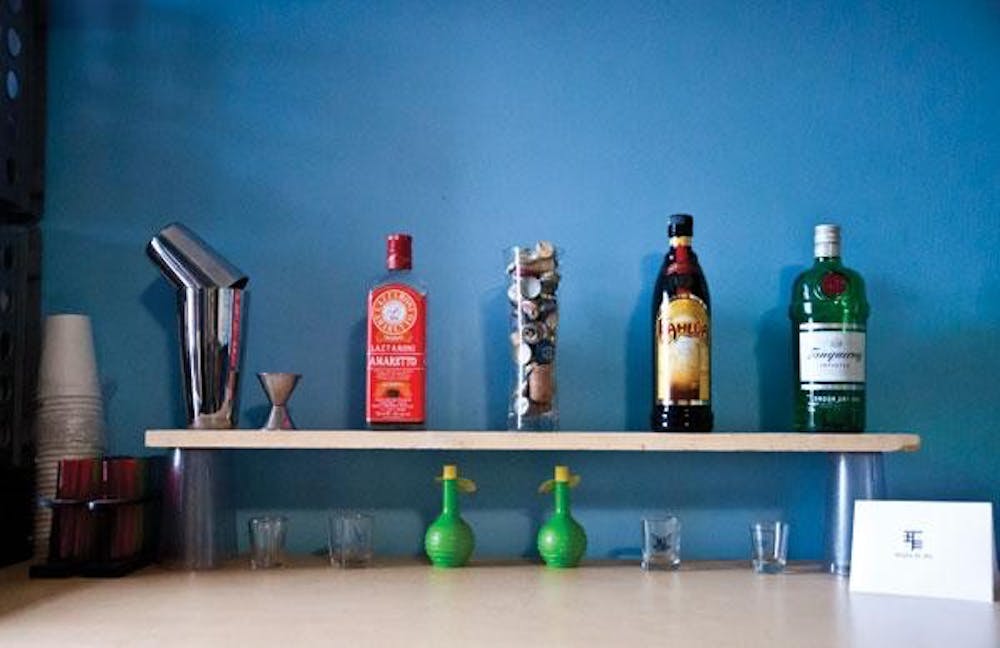 There are few log cabins at Rice University. In fact, to have said there was even a single one would have been untrue until this year, when Martel College senior Alex Weinheimer constructed his very own. Early last semester, Weinheimer, a Thresher Backpage editor, converted his room in Martel Suite 411 into a nearly exact replica of a log cabin.

The floors of the room are entirely hardwood, purchased and installed by Weinheimer himself. The room's walls are covered with cabin-themed wallpaper so that the entire room appears to be made of wood.

"Basically, I saw someone putting together a bookshelf and thought to myself that there had to be some cheap wood out there," Weinheimer said about the motivation for the

The room also contains a Christmas tree throughout the year for both decorative and illuminative purposes.

"I like decorating for Christmas, so I have a tree, and it provides nice lighting," Weinheimer said. "I'm too lazy to take it down, so it stays up the whole year."

The entire process took about 12 hours of work, according to Weinheimer, and cost him nearly $300. Weinheimer funded and made all the changes to the room himself. The result is that the room, which initially consisted of white walls and carpet, now bears a stunning resemblance to a fully wooden cabin, looking more like something one would see in Vail, Colo., than at

Weinheimer, who hopes to own a cabin someday, said the room has benefits beyond its aesthetic appeal, including how easy it is to clean.

"I think it's better for my health," Weinheimer said. "I don't

Weinheimer, who will be returning to Rice for a fifth year next year, said that although this was his first year modifying his room, he plans to make similar alterations next year. Weinheimer's commitment to the process cannot be doubted; he even removed the desk from his room to create more floor space.

The room is also equipped with Weinheimer's leather chair and Craftsman toolbox, two requisite components of any cabin. Weinheimer also has a framed, antique map of the Rocky Mountain area, where he is originally from, and a "Keystone Light fish," which is a decorative metal fish mounted on his wall with a Keystone Light embedded in it.

Additionally, Weinheimer replaced all of his door handles with antlers, and the room has a sign saying "What happens at the cabin stays at the cabin."

"It's nice coming back to it," Weinheimer said. "It feels

Needless to say, the room has also proved beneficial for entertainment purposes. Weinheimer has already hosted several events in his revamped abode.

"I threw a cabin party where you had to wear flannel to attend, and I plan on more," Weinheimer said.

Weinheimer said he initially had no plans to alter his room but decided to do so after he researched the process and realized it would only cost $300.

Another motivation for the modifications may have been his suitemates. There are six of them in total. Five of them lived together their freshman year, and while some were forced off-campus during their junior year, they all reunited once again in the fall.

The suite's common room is also decorated with the walls painted to resemble a microchip. There is a projector screen on one of the walls that serves as the focal point for the room with lines emanating in all directions from it and converging at the projector. Weinheimer's suitemate, senior architecture student Josh Howard, designed the room around the same time Weinheimer

was modifying his own.

The common room's technological theme may contrast the more earthy atmosphere created by Weinheimer's room, but the overall effect of the changes is undeniable.

"People are usually shocked when they see it," Weinheimer said. "They take pictures."