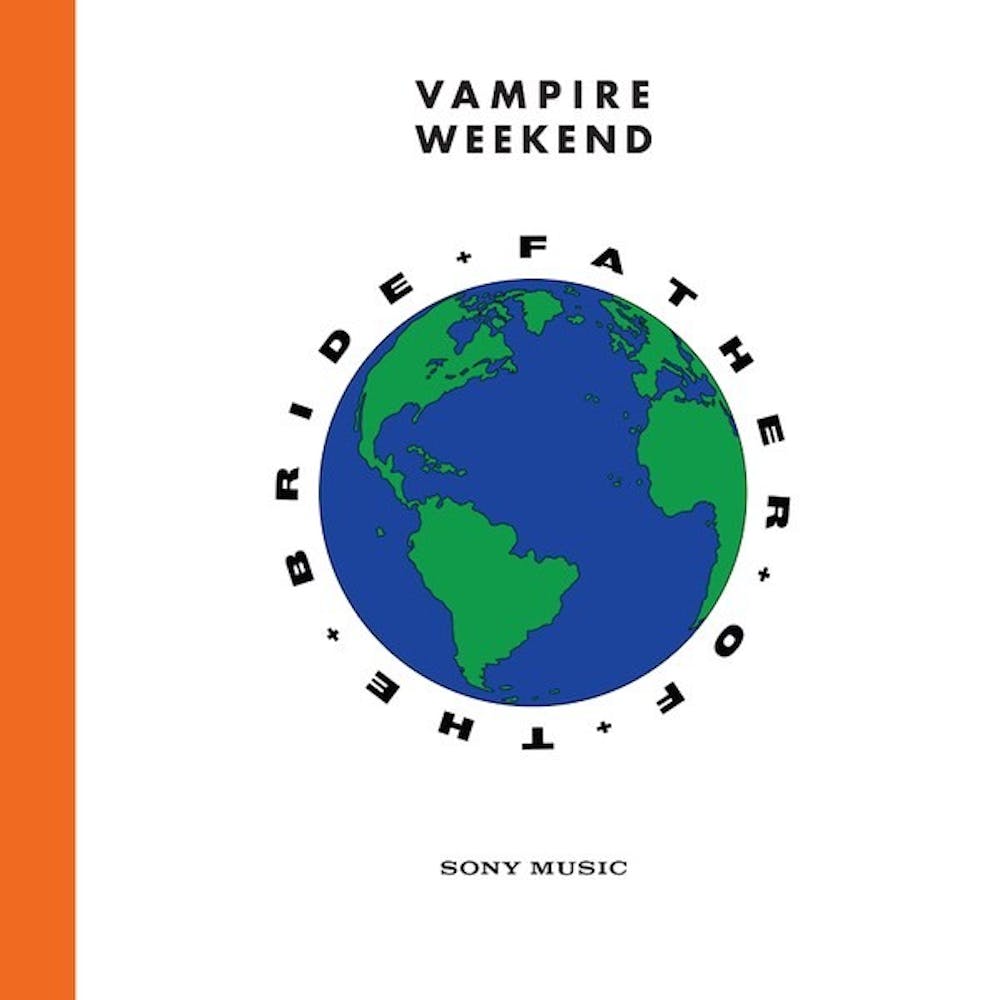 With Father of the Bride, Vampire Weekend makes their triumphant return, delivering a record that poignantly captures modern skepticism about the environment, faith and love in radiant melodies that are sure to saturate your summer playlist.

Their fourth studio album, Father of the Bride was released May 3. This album marks Vampire Weekend’s first album since their 2013 Grammy-award winning Modern Vampires of the City and their first album on major label Columbia Records.

The album follows the release of three double singles over the past three months: “Harmony Hall/2021,” “Sunflower/Big Blue” and “This Life/Unbearably White.” These six tracks garnered immediate media frenzy and fan acclaim as Vampire Weekend’s signature indie rock sound reentered the atmosphere just in time for summer. The singles make up six of a whopping total of 18 songs on Father of the Bride.

The record comes in at just 58 minutes, many of the songs spanning less than three minutes and a couple less than two. As someone who struggles with listening to an album from beginning to end, the contrasts between short-and-sweet tracks like “Bambina” and longer tracks like “Harmony Hall” kept me listening intently rather than passively. The variety of song length and attitude keeps the album from becoming monotonous.

There is a definite distinction between the moods of the first half of the album and the second half, with the song “My Mistake” serving as the turning point. Tracks in the first half of the record include pleasant folk-inspired melodies carried by acoustic guitars and beach pop synths. This first half is also tinged with country guitar influences, giving tracks like “Hold You Now” a melancholy, down-to-earth feel that balances out the brighter sounds of tracks like “This Life.”

The second half of the album departs from the sunshine of the first half by evoking more somber, contemplative tones. Tracks “Sympathy” and “Sunflower” experiment with electronic synth and funk influences. As a result, Vampire Weekend’s effort to synthesize different genres with their trademark indie rock at particular points in the album is highly appreciated, and saves Father of the Bride from becoming a sidekick to Modern Vampires.

Father of the Bride also greatly benefits from collaborations with vocalists Danielle Haim of indie rock sister trio HAIM and Steve Lacy of R&B band The Internet. Haim’s voice meshes seamlessly with the sunny, mellow rock that Vampire Weekend excels in. Her verses on the album’s opening track “Hold You Now” are gentle and romantic as she plays the role of a bride-to-be being confronted by an ex-lover on her wedding day. She is also featured on “Married in a Gold Rush” and “We Belong Together,” lending a feminine charm to the songs and assisting lead singer Ezra Koenig in carrying motifs of the uncertainties of marriage and everlasting love throughout Father of the Bride.

Even given the numerous collaborations and production contributions that undoubtedly elevate the sound of Father of the Bride, Koenig’s lyricism still stands out unequivocally, thus continuing Koenig’s artful introspection and expression of “millenial unease,” a term he coined in a 2013 interview that captures the generational anxieties that surface in his songwriting. Sprightly melodies are accompanied by grim observations of our deteriorating planet. Even the album art signals a certain nostalgia of a brightly colored Earth that is slowly becoming a distant memory in the 21st century worldview, and may even become completely alien to future generations.

Koenig agilely voices these concerns throughout the album, directing the listener’s attention to the increasingly prevalent issues of climate change while preserving the record’s optimistic aura. This optimism is not blind, however, as Koenig concedes, “Things have never been stranger, things are going to stay strange” on the appropriately-named track “Stranger.” The apprehensive question, “How long until we sink into the sea?” floats atop the groovy beat of “How Long?” Koenig continues prodding dialogue on the unnerving possibilities of a world affected by climate change, singing, “There’s an avalanche coming, don’t cover your eyes,” on the previously released single “Unbearably White.”

Koenig also explores his identity as a Jewish-American with his lyricism, observing the disheartening realities of anti-Semitism and general racial discrimination in America. In the song “Sympathy,” Koenig underlines the lasting rift between Christian and Jewish religions that has unfortunately made them seem life “enemies for centuries.” On the track “Married in a Gold Rush,” he and Haim team up to lament, “Something’s happening in the country and the government’s to blame.”

Koenig reflects deeply on Jewish diaspora on tracks “Sympathy” and  “Jerusalem, New York, Berlin.” In the final track of the album, Koenig seemingly resigns to “let them win,” but urging his listeners to stop “them,” maybe referring to anti-Semites or fascist governments or both, from restarting “that genocidal feeling that beats in every heart.”

Vampire Weekend has undoubtedly resumed their position as the quintessential indie rock band while simultaneously incorporating new sounds that elevate Father of the Bride to exuberance. Koenig’s songwriting continues to reflect and evolve with the turbulent state of the world, keeping listeners acutely aware of important issues with lyrics disguised by sunny melodies and mellow beats that will somehow make summertime even more worthwhile.

Father of the Bride is available on all major music streaming platforms.