SRBs prepare to reopen with CDC guidelines in mind 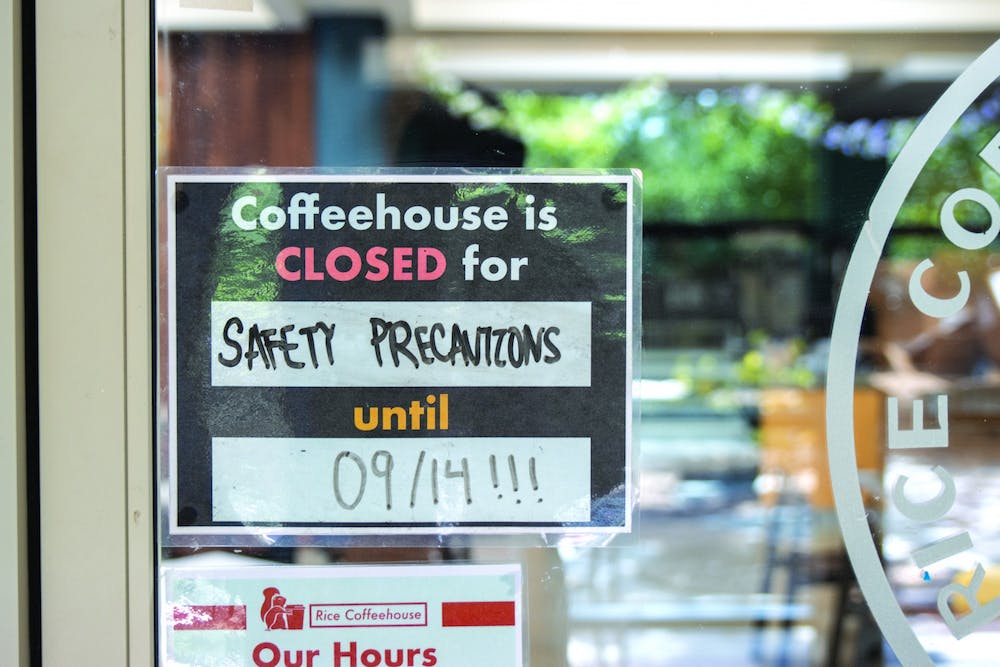 The three official student-run businesses on campus, Rice Coffeehouse, The Hoot and Rice Bikes, all expect to reopen in September after submitting return to campus plans to Rice’s Crisis Management Team, according to the businesses’ respective Facebook pages. The student-owned business East-West Tea will not open in the fall, and Willy’s Pub, which is student staffed, cannot open until statewide restrictions on bars reopening are lifted.

All departments returning to Rice, including student run businesses, were required to submit return to campus plans before reopening, according to Kathryn Cavender, director of environmental health and safety. Rice Coffeehouse, The Hoot and Rice Bikes were the only student businesses that submitted reopening plans and had their plans approved, according to Cavender.

Rice Bikes is the first student run business set to reopen, with a reopening date of Sept. 8. It will be operating by appointment only in order to comply with Centers for Disease Control and Prevention social distancing guidelines, according to General Manager Graham Curtis. Curtis said that suspending operations in the spring after campus closed and for all of the summer resulted in a long time away from the shop for returning mechanics and a rushed goodbye to graduating mechanics.

“Thankfully, we have lots of really talented mechanics coming back to work this year, and we’re looking forward to when it’s safe to welcome back our alumni and our mechanics that are remote or taking the semester off,” Curtis, a Hanszen College senior, said in an email.

Curtis said that the refurbished bikes that have been determined to be abandoned by Rice University Police Department that Rice Bikes will sell are not bikes that students left on campus when campus closed in March. According to Curtis, the only bikes that were relocated over the summer were those stored in bike racks outside of Hanszen and Wiess Colleges, which were moved by Housing and Dining to make room for the medical staff that were housed there over the summer.

“If a bike was on those racks in early March and has since gone missing, the owner should check in with Olivia Waldron at H&D to coordinate retrieval,” Curtis said. “Unfortunately, if a bike has gone missing from anywhere on campus other than Hanszen or Wiess, my best guess is that it was stolen — stolen bikes should be reported to RUPD.”

Rice Coffeehouse currently has a reopening date of Sept. 14. The reopening date is still tentative, according to General Manager Brendan Wong, who is managing remotely this semester.

“Everything is still very uncertain in terms of if we are opening,” Wong, a Jones College senior, said. “I think from the get go, we were always making sure that the community health comes first, and community safety, also employee safety as well. So we’re still observing, we’re still trying to see how campus evolves over time.”

If Coffeehouse does reopen, it will be at a reduced capacity, with customers ordering online and picking up their drinks when they are ready, according to Wong. Other changes will include customers no longer bringing in their own mugs, no more dollar drip coffee and no more cash tips due to the potential health hazards, according to Wong.

“In terms of the fall, we are still paying employees as usual. It is just hard because we will not be able to do physical cash tips as we would normally do,” Wong said. “A lot of things we’re switching internally to make sure employees are safe, and then when customers pick up their drink, that that’s also safe.”

Wong said that Coffeehouse’s reopening will depend on what is safe for customers and employees and how the university evolves between now and the tentative opening date.

“Internally, I want to make sure that [...] everybody feels confident and safe, and if any component is missing out, we may just delay our reopening or just not open at all,” Wong said. “I do feel like it would be a sad thing if Coffeehouse doesn’t open and serve coffee to people, but again, it’s a pandemic and people’s health comes first, and that also includes our employees.”

The Hoot, which is set to reopen Sept. 20, will reopen for orders to pickup and delivery only with a delivery system that the business has been developing since before the pandemic, according to General Manager Christian Owens.

“Two or maybe three years ago we launched our first delivery [system]. It was mildly successful, [but] there were a lot of problems with the way that we had to do it,” Owens, a Martel College senior, said. “Now we’ve come up with this, and I think this is a lot better in every way.”

The Hoot will deliver to the eleven residential colleges and be available for pickup at its location in the Rice Memorial Center. This semester, customers will be able to pay for The Hoot deliveries with debit, credit or Tetra through the online order form.

“I think [paying online with Tetra] is going to be gigantic for us, because that’s one of the biggest ways that we make our money. H&D has said that’s probably not something that we can continue to do, but I’m hoping they reconsider that after this semester,” Owens said. “This semester has kind of given us the opportunity to push that to the forefront, where a lot of the things that have been on the backburner for a while have been pushed up, and we’ve actually made them happen, which I’m excited about.”

Korista Lewis, associate director of student-run businesses for the Rice Student Center, said that the facilities and events team has been working with the Crisis Management team on updated signage related to adjusted space capacity numbers and distribute personal protective equipment to offices within the RMC. The student center has also placed fixtures to direct traffic flow throughout the building, removed some soft seating from the building and will remove all seating from Sammy’s during lunch service to encourage physical distancing.

“I am proud of the great work the SRB managers did throughout the last six months in supporting their employees and working on these plans to get back open this fall with all of the challenges that come in a pandemic. We have some amazing student managers and I love working with them,” Lewis said in an email.

Willy’s Pub closed last semester before other student-staffed businesses and campus closed after an incident involving Wiess College’s student government changeover. General Manager Emily Duffus said that based on Pub management’s conversations with administration, Pub would have been able to reopen this fall if not for statewide restrictions on bars reopening.

“We had always kind of been in communication about potentially opening late September. Ideally, that’s when bars would be opened back up in the state, but we’re not really sure how cases are going to trend in Houston, so we can’t say for sure. But we’re definitely on track to open a couple weeks after the state allows bars to reopen,” Duffus, a McMurtry College senior, said.

Duffus said that Pub will soon be launching a fundraising campaign to recuperate the losses caused by the business closing last semester, with a goal of raising $20,000 before reopening.

“A lot of the Rice student-run businesses that are official SRBs are able to get compensation from the administration. But Pub is run a little bit differently from most SRBs. We have our own payroll system and our own finance management that takes care of that. So we weren’t able to afford paying our employees outside of when we were closed for the pandemic,” Duffus said.

According to Duffus, although Pub employees could not be compensated with Rice funds after campus closed, some employees were able to apply for and receive Texas unemployment funds.

Duffus said that Pub will continue to host virtual events, such as the virtual trivia night they held on Aug. 26, and will attempt a dual delivery format for virtual events if Pub is permitted to reopen this semester. Reopening this semester would also involve Pub moving to an outdoor space, according to Duffus.

“Safety’s one of our top priorities in reopening and our risk management plan,” Duffus said. “We’ll likely start by opening back up just for certain events, like maybe we’ll open up Wednesday and Thursday nights, or maybe something over the weekend [...] And then as we see how that works, we might be able to open up for a little bit longer. We’re also potentially looking into the option of delivery.”

East-West Tea will be closed for the fall semester. This decision was made with input from East-West Tea’s employees, according to General Manager Judy Liu.

“We did run through some different scenarios including grab-and-go, maybe order and delivery or even DIY boba packets that they could just grab and cook themselves. But whatever it was, we needed to have extensive discussion with H&D,” Liu, a Lovett College senior, said. “It was eventually decided that if we really pushed [forward] with reopening, in whatever capacity, we needed to run through several backup plans …  with the Crisis Management department. Which makes sense, especially since we are not an actual student run business, so there is a lot of liability that could be tied to us.”

Liu said that closing for the fall semester was a necessary decision.

“Especially since there’s a lot of uncertainty around campus, whether or not we can stay open as an operating university in general. But if we are presented with the opportunity, and gratefully also supported by H&D, then I think there will be a chance that Rice students will still be able to taste our products,” Liu said.

Liu said that while East-West Tea will be closed for retail in the fall, the business will be working on a potential partnership with a Houston social justice organization, as well as working on internal projects to rebrand the company.

“Something we take pride in is the fact that East-West as a student-owned business, we’re able to have flexibility over what we want to support,” Liu said. “That partnership is something to be worked out on, but that’s exactly what we want to really focus on during this extra time that we have this semester.”