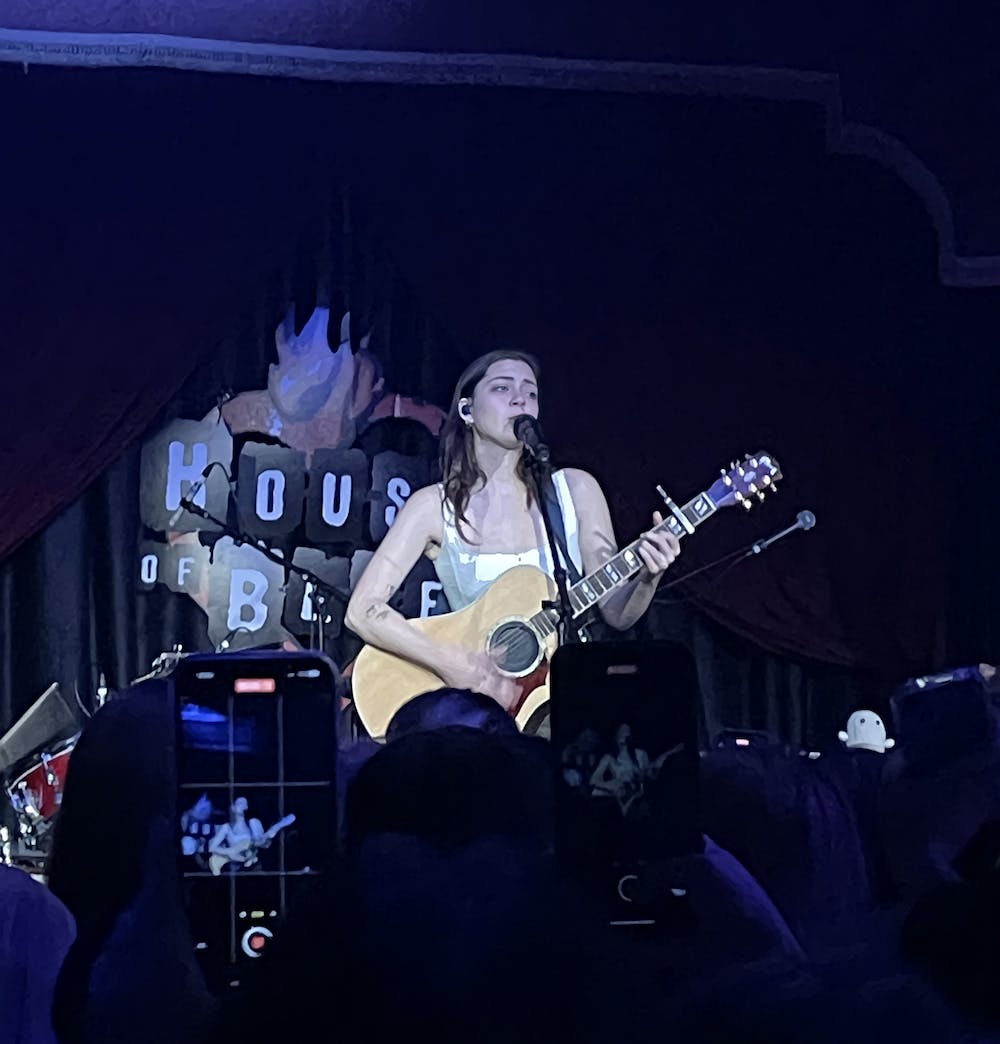 Nobody likes a secret, and Lizzy McAlpine is no longer mine. The singer-songwriter performed the Houston stop of her tour at the House of Blues last Thursday to a packed crowd, whose singing only stopped when she debuted her unreleased songs. The Philadelphia native has been consistently releasing indie-folk projects since before her college years at the Berklee School of Music, but her fame has skyrocketed since she dropped her sophomore album, “five seconds flat,” in April of this year. Although it seems only fair that an artist of McAlpine’s caliber finally receives the recognition she deserves, I’m a little disappointed that I can’t keep her all to myself.

Speaking of sadness and the House of Blues, the show opened with Carol Ades, one of my favorite new singer-songwriters for wallowy sad girl music. For an artist who only started releasing music a year ago, Ades has also experienced a rapid rise in the industry, possibly due in part to her notoriety as a songwriter. My favorite thing about Ades’ music, which I think McAlpine also does remarkably well, is its ability to lean into ugly feelings through unabashedly honest lyricism (“I did a really bad job / Tryna be a really good girl”). As she found her voice in the music industry, Ades says that she allowed herself to stay in her sadness rather than running away from it — jokingly, she assured us that we were finally about to move into lighthearted material, then sang “Crying During Sex.”

On stage, Ades carries herself with the same disarming authenticity that stands out in her songs, charmingly maneuvering through the occasional audio glitch and fans’ questions about whether she’s tried Buc-ee’s yet (the answer was no, but we’re all going after the show). If her success so far is any indication of what’s to come, I would say that Ades isn’t too far from earning her own headlining tour (and hopefully feeling more “happy or something”) soon.

McAlpine entered the stage with “an ego thing,” an edgy, halting track. A true professional on her very first headlining tour, McAlpine soldiered through her set list after having lost her voice only a day prior. She later shared online that she was experiencing a bout of laryngitis, and was forced to cancel following shows in Dallas and Austin. Even at limited vocal capacity, her runs and belts were impressive, and her tone somehow retained its richness even as the audience’s singing occasionally overpowered her. McAlpine graciously accepted flowers and professions of fans’ love as she alternated between the sweet songs from her previous projects (“Pancakes for Dinner,” “To The Mountains,”) and the more mature ones that established her as a musical force (“all my ghosts,” “orange show speedway”). Of course, “ceilings” was a crowd favorite, perhaps because the song balances the softness and sincerity of McAlpine’s earlier works with the skillful storytelling of “five seconds flat.”

Another standout was “Emma,” one of two unreleased songs McAlpine introduced to the audience. The song paints McAlpine and her sister’s childhood in vivid detail, preserving the tenderness of her earliest heartbreaks even as time passes. “This house smells like old routines and Daddy just got laid off,” sings McAlpine, promising her sister that they’ll be together until the end.

McAlpine performed incredibly well in spite of her compromised vocals, and I was just happy to be there. If anything, the fact that she still sounded great with laryngitis is a testament to her vocal technique, professionalism and dedication to her craft. I hope McAlpine returns to Texas soon for another encore — maybe we can all get Slurpees when we go on that Buc-ee’s trip.