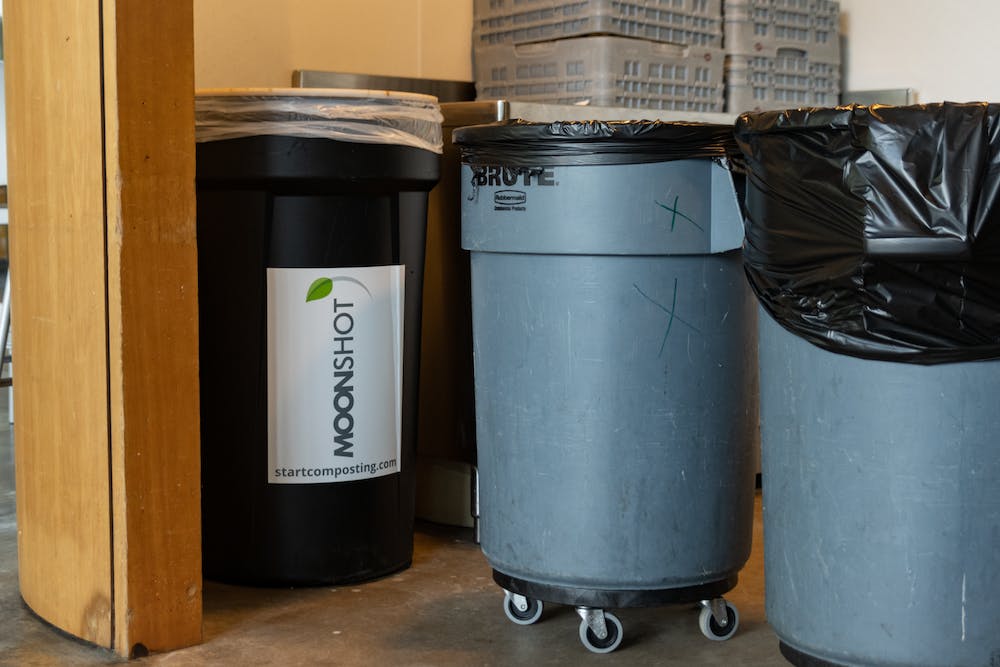 When Sid Richardson College freshman Grace Kwan walked into the servery for the first time, she was pleasantly surprised by the numerous palm leaf plates.

“I noticed that the plates were not normal paper plates, but looked wooden,” Kwan said.

The palm-leaf plates — which juniors and seniors may recognize, as they were used in the serveries before the pandemic — and the compostable gloves and utensils mark a sharp transition from the black plastic to-go containers and non-compostable utensils of the previous school year.

These changes are part of Housing and Dining’s new post-consumer composting program for waste generated by servery patrons. Gloves, utensils, plates and any other items marked as compostable are provided so that composting is as convenient as possible for students, according to Ashley Fitzpatrick, the president of the Rice Environmental Society and an intern at Rice’s Sustainability Office.

“The goal is that somebody can have their plate and at the end of their meal, they can just drop it straight into the compost and not have to worry about anything else,” Fitzpatrick, a Martel College senior, said. “Everything in the servery that you take out is going to be compostable, with the exception of those small portion-controlled packets.”

After a pilot run at Martel and Sid Richardson last spring, the post-consumer composting program has been expanded to all residential colleges as well. According to an email from Fitzpatrick and college EcoReps to the student body on Aug. 25, students are now able to compost in their rooms after they read provided educational materials and pass a quiz that tests the ability to categorize materials as either compostable or non-compostable.

“Students this year [can] participate in post-consumer composting, which means that they can not only compost excess food on their plate in common areas but, like last year, also apply to take a quiz to get individual compost bins in their dorms as well,” Helen Tian, a Sid sophomore and Eco-Rep, said. “I personally am really excited about the expansion of the dorm residential composting to all of the colleges, not just at Sid and Martel, because this program has so much potential and room to grow.”

Brad Thacker, the H&D director of operations for the North Colleges, said that to prevent contamination and to encourage proper composting, post-consumer composting is optional. This helps to ensure that those who choose to compost do so in a mindful manner.

“We chose not to put compost bins everywhere because it is an opt-in program,” Thacker said. “We want it to be convenient but not overly convenient. [The option] mitigates the risk of [those who choose not to compost] contaminating the efforts of those who want to participate.”

Wiess College junior and co-chair of the Student Association Environmental Committee Madeleine Cluck said that three videos regarding recycling, composting and sustainability were part of new students’ matriculation modules on Canvas. Cluck and Fitzpatrick are working alongside campus eco-reps to further educate the student body about what can be composted at Rice. According to Thacker, this campuswide education is important for preventing contamination of the compost by non-compostable material.

“[The contamination rate] needs to be below 1 percent,” Thacker said. “If [it] begins to go up and we drop off contaminated composts, our compost partners will cut us off.”

“Pre-consumer [composting] is a lot easier to control because it is just in the kitchen and you don’t have as much variation,” Fitzpatrick said. “[Post-consumer composting] was a lot more difficult to implement [amid past COVID-19 policies] because we didn’t have people eating in the college commons and there wasn’t a central place where people were actually discarding their waste. So even if we had composting set up [in college commons last school year], most people’s food would still probably go into trash bins inside or outside their rooms.”

Moonshot, a local composting company, delivers the food waste in the compost bins at Rice to nearby composting facilities. According to Moonshot co-founders Chris Wood and Joe Villa, the composted food waste can be used in crop production and flood prevention in numerous ways.

“When we collect both the pre- and post-consumer waste from Rice, we take it directly to a composting facility, where it’s mixed with other vegetative materials like yard clippings and tree trimmings to form nutrient-rich compost,” Wood and Villa wrote in an email to the Thresher.

The nutrient-rich compost can then be transported to various community gardens around Houston, such as Rice’s holistic garden, where it aids crop production, according to Wood.

“It’s this beautiful closed-loop system, where the nutrients from the food waste, rather than going to the landfill, go to great compost, and that compost is returned to community gardens where healthier produce is able to grow,” Wood said.

According to Fitzpatrick, troubleshooting and improving the post-consumer composting program at all colleges in response to student feedback will be the focus of the upcoming weeks.

“This past week, as well as the next coming weeks, are all about identifying and mitigating problems as they arise,” Fitzpatrick said. “In response to student feedback over the last week, we will be upgrading signage, amending layouts of bins in dishrooms and transitioning to a system where students will scrape food off their plates then stack the palm leaf plates and bowls next to the bins to better manage the volume of waste.”

According to Thacker, it will take some time for people to be trained in post-consumer composting, and he does not yet have real data on the program at Rice.

“The post-consumer compost bins are located in the dish rooms of each college,” Thacker said. “Because dining was moved outside, people [were] not using these receptacles but [they were] instead using whatever receptacle is closest to where they eat, whether in the room, hall or quad.”

Kwan said that more attention should be brought to the new composting program.

“I think right now most people don’t know that almost everything from the servery is compostable,” Kwan said. “I only heard from word of mouth that there is a compost right next to the two normal trash cans. So far, I’ve only composted the plates and the food but I threw away the cup and the utensils.”

Soleste Starr, a junior from Martel, said that greater publicity for the program would be helpful.

“The only improvement I stress heavily is publicity,” Starr said. “I think that more people need to know about the system and what to toss and not toss.”

As Rice implements post-consumer composting, Wood and Villa said they are looking forward to the upcoming semesters.

“Since Rice has begun the program, Rice students have participated in diverting over 60,000 lbs of food — and that’s just with pre-consumer composting,” Wood said. “With more students on campus and the implementation of post-consumer composting, we expect this number to increase dramatically.”