As Rice prioritizes COVID-19 safety, the environment takes a hit 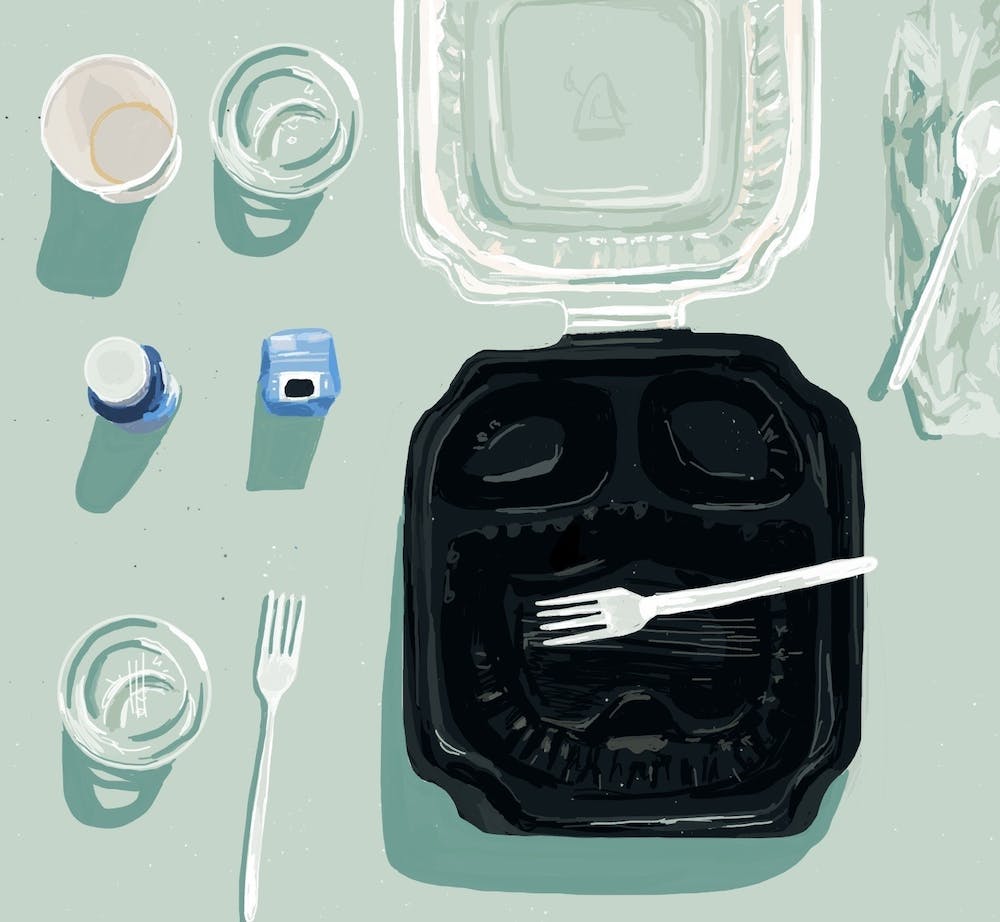 Each on-campus Rice student fills a 30-gallon trash can every week with only their clamshells, according to an estimate that EcoRep and Hanszen College senior Christine Zhao reached using measurements from the manufacturer of the clamshells and the number of trash cans. But Housing and Dining Senior Business Officer David McDonald said there was no other option — especially since about 250 students remained on campus once the majority of Rice students left.

“One of the first things we did back in March, knowing that we had these 250 students to feed, was [locking] down that supply chain,” McDonald said. “We’ve done a lot of great environmental things here at the university … but at the time, it was really more about, we have got to lock this down and have the right supply.”

The supply chain, which refers to the path that products take from the manufacturer through the distributor to Rice, is now steady enough that H&D and the Rice EcoReps will likely switch to more environmentally-friendly servingware next semester, according to McDonald.

During the pandemic, at Rice and beyond, scientists, policymakers and community leaders were forced to rapidly reimagine living and working conditions. Some of these changes, such as jumps back to single-use plastic and increased air ventilation, are damaging to the environment and hit the pause button on Rice’s push toward reusables. But the quick shift to a more sedentary lifestyle — with 30 million Americans newly unemployed, much of the non-essential workforce working from home and countless school buildings closed — improved air quality and prompted an unprecedented decline in greenhouse gas emissions, though perhaps only temporarily.

A quick switch to plastic

Though most Rice students were sent home in March, about 250 remained on campus. The university needed to feed them, but they also had to adapt to rapidly-changing guidelines from the Centers for Disease Control and Prevention, which meant no contact and no buffet, but lots of sanitation.

“To meet the CDC guidelines for food service in a large-scale environment, we had to do what we could very quickly,” McDonald said.

In this case, that meant entering into a contract for single-use plastic clamshells that McDonald believes will last through December.

Zhao was one of those 250 students who remained on campus and saw the rollout of the disposable clamshells, which she said troubled her. Once Zhao returned to campus this fall, she said she learned that other students felt similarly.

“I would stay up late at night thinking about this and just be so bothered by the huge amounts of trash that would be generated from the servery,” Zhao said. “One poignant memory I have was at the first EcoRep meeting, every single person went around and they said that the number one complaint that students had was the servery plastic use.”

“We’ve heard as EcoReps from pretty much every college, and from our own staff, a lot of concern about the plastic that’s being used on campus this year,” Kesler, a Brown College senior, said.

In non-pandemic times, Rice’s serveries distribute plates, utensils and cups that they then wash and reuse. Takeout containers are usually palm-pressed plates, which are compostable unlike most plastics. Additionally, to further move away from single-use plastics, EcoReps were running a greenware program through which students could check out plates, bowls, utensils and cups, according to EcoRep and Will Rice College senior Kelsey Evans. H&D would wash all the servingware used through the program, she said.

As an EcoRep, Zhao took it upon herself to find something besides the plastic clamshells for Rice to use during the pandemic, hoping that serveries could transition before a larger population moved in for the fall, but once she met with McDonald, she learned that H&D had to honor their contract through the first semester. Over the summer, Zhao said she launched into research to find an alternative for Rice to eventually adopt.

“The amount of waste that our university would be generating over the course of a year would be massive once everyone [came] back,” Zhao said. “I personally took on over 15 hours of research and testing and communicating with manufacturers over the summer.”

In her research, Zhao focused on four key criteria that H&D told her their servingware needed to meet: any servingware needed to be able to withhold high temperatures, withstand lots of oil, be microwaved and have a stable supply chain. Ultimately, she landed on a container made from bagasse sugarcane, a natural, renewable resource, and lined with polylactic acid, a renewable bioplastic often used in 3D printing. Zhao said she tested the lined container with hot food, oil and in the microwave, and it worked.

“A lot of the bagasse containers [without polylactic acid] decompose really fast, but they also get really soggy fast,” Zhao explained. “But if it’s lined with [polylactic acid] … then it’s much more water-resistant and oil-resistant.”

After many emails and conversations with H&D, Zhao managed to get the sugarcane-based container approved. McDonald said he is optimistic about the container Zhao found, which his team has recently finished testing.

“We just got done testing it last week, and we think it will meet our needs,” McDonald said. “Now that we’ve sort of settled down [and it] looks like the supply chain is intact … I think we [will] make the switch.”

McDonald lauded what he called a “symbiotic” relationship between the EcoReps and H&D.

“Some of the EcoReps are just doing a really great job,” he said. “We’ve all worked very closely together, and we’ve all implemented their ideas, they’ve helped us implement our ideas.”

It remains unclear, though, whether this new container would have a positive environmental impact. Zhao said that the containers she found are made from fully renewable sources and that the container should decompose faster than plastic. However, Rachel Meidl, a fellow in energy and environment at the Baker Institute, said that the polylactic acid lining in these containers may be worse for the environment than regular plastics, as one must account for the water and fertilizer required to grow the corn that produces the polylactic acid, in addition to other impacts from its lifecycle.

“When you look at all of the impacts — the social impacts, the environmental impacts, the economic impacts from a lifecycle perspective, the way that the system now is — [polylactic acid] has greater environmental impacts from a lifecycle perspective than the plastics themselves or other types of materials,” Meidl said. “It’s hard to say what is the more and the most sustainable choice; it’s really an integrated approach, and it’s something that can’t be done in isolation [because] you really have to look at all those different variables.”

Zhao isn’t the only member of the Rice community who set out to find alternatives to plastic. Among the population that remained on campus through the spring semester were Baker College’s Residental Associates Matt Patterson and Bobby Beaird. Like Zhao, they said they felt unhappy using so much plastic.

“We’re part of the recycle, reduce, reuse generation,” Beaird said. “The fact that we’re throwing so much plastic away was absolutely killing us.”

This reliance on single-use plastic was also not what Patterson said he had experienced in the past at Rice. He said he felt like there was something Rice could do to try to cut down on waste. So, in conjunction with the Baker magisters and other RAs, Patterson and Beaird decided to buy “little cutlery kits” for Baker students who wanted them. They said they expected perhaps 50 students to sign up, but before long, their signup sheet had 96 names.

“[That’s] a hell of a lot more than usually sign up for things,” Patterson said.

The initiative was soon repeated at other colleges, including Will Rice College, where RA Sandra Parsons has so far bought 35 sets of utensils.

“Students report using them and liking them,” Parsons said. “People seem to be using them, and I have definitely had interest in perhaps ordering a second round of sets.”

Once the majority of Rice students left campus back in March, Rice’s Facilities Engineering and Planning department took steps to decrease energy and water consumption, according to Director of Sustainability Richard Johnson.

“The savings were striking,” Johnson said. “We found that total energy consumption was down by 28 percent and total water consumption dropped by 31 percent. Also, with so few people on campus, trash volumes were down by at least 75 percent.”

“Now that the fall semester has started, the energy team in FE&P has enacted a new operational strategy for air conditioning focused on significantly enhancing ventilation,” Johnson said. “This uses more energy, but it’s the right thing as part of the broader set of measures necessary to respond to the pandemic.”

Similarly, Johnson said trash volumes at Rice are now 35 to 40 percent lower than pre-pandemic levels — but campus occupancy is only about 45 percent, according to Susann Glenn, director of communications for administration.

Now, more Houstonians are using Apple Maps for routing directions than were before the pandemic, which might indicate a return of pre-pandemic traffic on the road. At Rice, the number of parking permits for undergraduates, graduate students and faculty and staff has increased compared to last year, according to Michael Morgan, the parking manager at Rice.

Air quality had improved during COVID-19 related lockdowns, but is now practically back to pre-pandemic levels. And though greenhouse gas emissions slowed earlier this year, the pace was not nearly enough to decrease the amount of carbon dioxide in the atmosphere, Cohan said.

“[Despite] the fact that we’re emitting, perhaps, 10 percent less this year than we normally would, carbon dioxide is still going up … and won’t stop going up until we reach net-zero,” Cohan said.

Cohan added that the increased energy usage as a result of additional air ventilation has shown him the urgency of implementing renewable energy sources.

“A take-home message from this would be this makes it all the more important for Rice and other businesses to shift to renewable sources of electricity,” Cohan said. “Places are going to need to use more power to keep their buildings safe, and there’s a real opportunity [because] wind and solar have gotten cheaper than they’ve ever been. If we can’t get the gains from efficiency like we used to, then we need to be getting the power from cleaner sources.”

At Rice, Zhao said she thinks the current situation with plastics has prompted students to get involved in sustainability advocacy.

“Our serveries being so plastic-heavy convinced more people, at least in my college, to care about the environment,” Zhao said. “This year, we had three times the amount of signups for the environmental committee than we had last semester. I guess it’s like a double-edged sword, right? We had to have all that waste, and all these plastics flowing out of our servery for people to really care.”