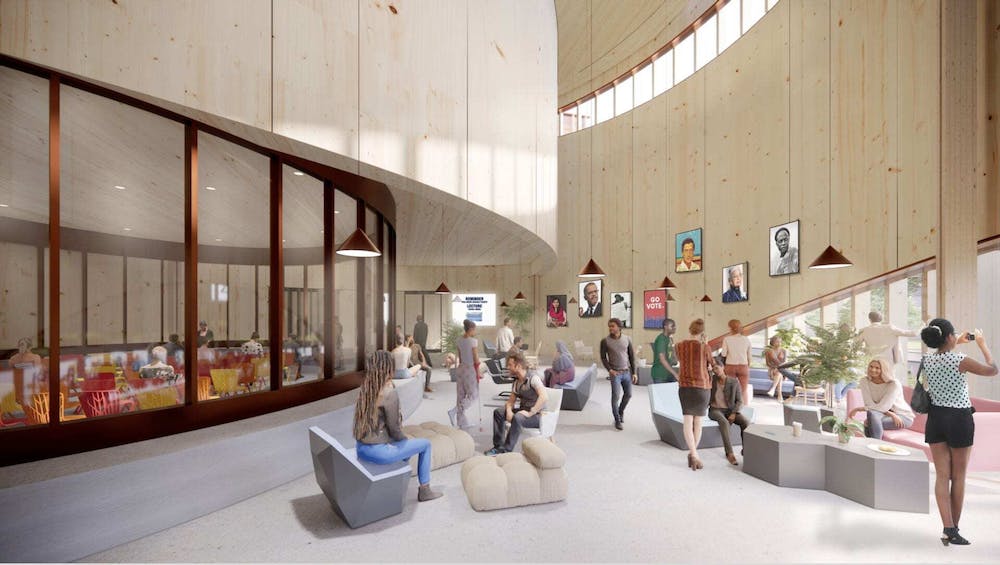 Rice received a $100 million donation from the Moody Foundation which will support construction of the new student center as well as endowments to support some of the program components of the center, according to President David Leebron. This donation, along with the Welch Foundation grant, are the largest private donations in Rice’s history, according to Leebron.

“We are extremely grateful to the Moody Foundation for so generously supporting not only this transformative building, but the programs that are essential to student opportunity and success,” Leebron said in an email to the Thresher. “They’ve taken a broad and holistic view of the student experience, one that matches the distinctive culture and philosophy of Rice.”

Leebron said that a generous and impactful donation is always the product of Rice’s key needs and the donor’s interest.

“I believe the Moody Foundation was focused on assuring the quality of our student experience in a world in which the elements of that experience are changing, which was evident in the student survey undertaken by the Student Association a number of years ago,” Leebron said.

Leebron said that the new student center will better serve the expanding population of Rice, as the current student center was built when the population of students was less than 2000. The Rice Memorial Center was opened in 1958 and the Ley Student Center was added as an expansion in 1986. Leebron said that the gift will have a major impact on the university and promote student life.

According to Leebron, the Brown Foundation provided the initial $15 million grant to support the project and enabled Rice to keep it moving along as they looked for additional funding.

The new student center design was chosen through a design competition where stakeholders and end-users were able to give their input, according to University Architect George Ristow.

“Design competitions are a collaborative way to select an architectural design team for projects with a wide range of stakeholders, and for buildings that aspire to long-term significance as important destinations,” Ristow said. “They also allow compelling ideas from all participants to be considered for incorporation into the ultimate design of the facility.”

Miguel Luna, general manager of Rice Coffeehouse, said his main priority in the new student center is to have more work space for employees and more seating for customers. He also hopes that the new Coffeehouse space will include an outdoor component.

Luna said that he was able to meet with the project architects and convey his ideas for the new Coffeehouse space.

“I think all of my feedback was well-received and they know that our feedback is the most important because, as architects, they don’t know what it’s like to work there, or be these students constantly going there,” Luna said.

Ristow said that student input was an important part of the design process. According to Ristow, the programming priorities used to determine space allocations throughout the planned student center are also based on student input from feasibility studies conducted over the last few years.

“We couldn’t do this project without a lot of help from students. Student leadership has been involved in the design of the new facility from the very beginning of the competition and it continues to be part of the project steering committee, which is the decision-making group,” Ristow said.

In a Rice press release, Elle Moody, trustee of the Moody Foundation and Rice University, said that the donation will not only support the new building but also is an investment in every student.

“As a Rice University alumna, I know this gift will have a profound and lasting effect on the campus and its students,” said Elle Moody to Rice News.

Construction will begin in early 2022, and the building is expected to be completed by late 2023.

The student center design steering committee has been working on helping guide the design and planning of the new student center building, according to Mario Escobor, Graduate Student Association president and representative on the committee.

The project steering committee includes the university architect, deans of undergraduates and graduate students, other student leaders, and university stakeholders, according to Ristow.

Escobor said that he hopes to implement changes to the GSA space in the new student center, and that the recent donation has encouraged him to continue working with the committee to ensure the plans are kept on track for the new building.

“I hope to see a more open and accessible space where graduate students can gather,” Escobor said. “The design of the space has focused on making the area functional for meetings while also being able to shift to a more casual environment.”

General managers of Rice Coffeehouse and The Hoot said they have been collaborating with designers to explain their vision for their spaces in the new student center.

Ryan Emelle, general manager of The Hoot, said that she has been able to attend meetings to discuss her vision and needs for the new spaces.

“The architects and the designers have been really welcoming and accommodating,” Emelle, a senior at Jones College said. “They have a lot of ideas for our spaces, as well as ideas that we didn’t even think of. So they’ve already been putting in a lot of forethought about how we need these spaces to be designed to better serve our businesses.”

Emelle said that she is excited for the future of The Hoot in the new student center.

“I am really excited about the donation because I think that means that whatever space we do get, it will be designed with a lot of intention to help our business grow and improve and function,” Emelle said.

Luna said that Coffeehouse is currently deciding on a temporary location for when the building is under construction but no decisions have been made. Emelle also said that no concrete plans have been made for temporary Hoot locations but one idea is running the business out of one of the campus serveries.

Adjaye Associates’ design is three stories, 80,000 square feet and includes a rooftop auditorium. An architectural rendering of the exterior features a vertical line pattern, windows and skylights and incorporates circular shapes in its design.