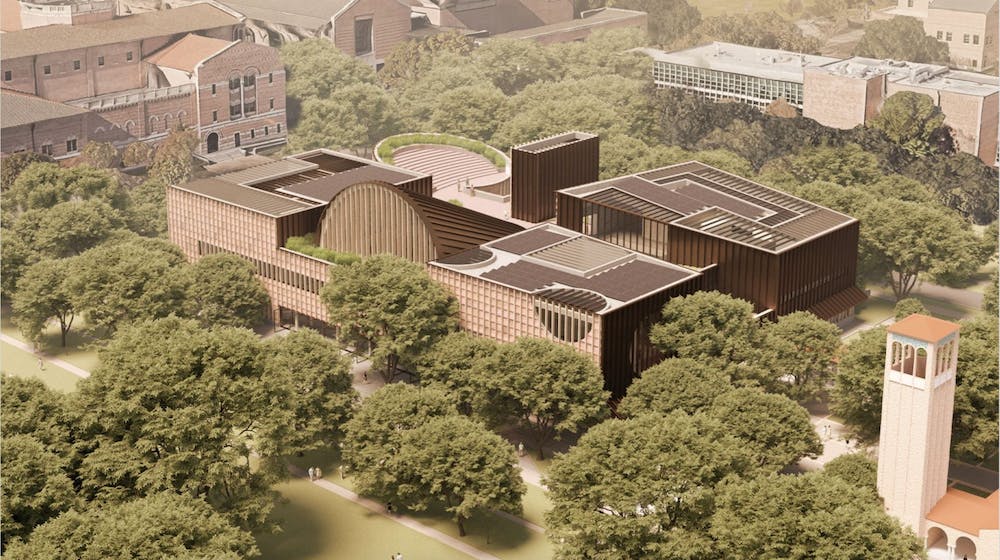 Adjaye Associates, an architecture firm with offices in Accra, Ghana, London and New York, will design Rice’s new student center, which is expected to be complete by fall 2023. The winner was selected by a committee of Rice administrators and faculty, with input from the Student Association and Graduate Student Association.

Coffeehouse general manager Brendan Wong said that he was on the SA Rice Memorial Center Design Task Force. Although the work of the task force was delayed by the pandemic and changes within the SA, Wong said he anticipates the task force will soon be picking up conversations with all the stakeholders involved.

“Coffeehouse would of course love to have a space designed specifically for our business, so I anticipate that the next management team will be in close communication with the student center regarding this matter. Coffeehouse currently occupies the Kelley Lounge of the [Rice Memorial Center], and the new RMC will provide creative opportunities for the future of Coffeehouse and other [student run businesses],” Wong, a senior at Jones College, said.

“In some ways, it is both a replacement and an expansion,” Ristow said. “What will be included in the new facility is likely to be similar programmatically to what is currently at the RMC, but its exact composition will be evaluated and confirmed by a group of stakeholders during a study phase that will begin in the coming weeks.”

Ristow said a new Multicultural Center will be located in the new facility, but its exact size and where it will be on the site will need to be confirmed in subsequent planning and design phases.

According to the Adjaye Associates website, the firm’s design approach includes a focus on materiality and light, sustainable architecture and community engagement.

“My approach is to design from the inside out and my buildings have been said to ‘unfold cinematically.’ The starting point is to gain an understanding of a client’s needs and the way in which a sequence of spaces will be used,” Adjaye said on the website.

Ristow said that the design concept proposed by the winning design team retains the size of the existing basement but calls for completely re-programming and renovating what resides within it, and further changes will need to be verified in the later phases of design.

KTRU station manager Harrison Lorenzen said that he would like for KTRU to have more visibility within the new student center.

“We tend to have a cool space and would like to be placed in a location where we can be more visible to passersby. We have long been tucked away in the RMC, where our new students can’t find us for their interviews, but it would be great to place us more centrally with windows so people can see the inner workings of a full-time radio station,” Lorenzen, a Will Rice College senior, said.

Lorenzen said he was concerned with the logistics of relocating some student groups while the student center is under construction.

“I am a bit concerned with the logistics of relocating all of the RMC groups and services during the construction since places like KTRU and Coffeehouse will have much different requirements than just relocating offices, and I hope that is taken into consideration,” Lorenzen said.

Christian Owens, manager of The Hoot, said that he would like to see the student-run business have a space to call its own in the new student center.

“Currently, we share space with 4.Tac0 (when it’s open), and we’d prefer to have our own. Of course, things like a new oven would be nice, but that’s certainly secondary to a new, personal space for us,” Owens, a Martel College senior, said.

Rice PRIDE president Anthony Nguyen said that he would like to see the Queer Resource Center in a more spacious and visible space in the new student center.

“Rice PRIDE uses the QRC often, but for larger events, we typically have to move to the [Multicultural Center] or another large area. Even pre-COVID, it only had room to comfortably fit a couple of people — even less than the RWRC — and I would love to see a future QRC be used as a cozy safe space that can also function well for large gatherings,” Nguyen, a Hanszen College junior, said.

Amy Lin, co-director of the Rice Women’s Resource Center, said that having a space in the new student center that is welcoming and cozy, like the current RWRC space, would be important.

“I think we definitely want to have a space like we do in the RMC now,” Lin, a Hanszen College senior, said. “It’s just a place where you can hang out and do homework with your friends as a safe space on campus. The biggest thing is making sure it’s a room that’s very open and very inviting as well.”

General Manager of East-West Tea Judy Liu said that the business is hoping to move into a space of their own in the new student center to expand their operating hours and renovating the space as they like, as they currently share a space with Sammy’s.

“The Student Center renovation has been in the works for a while now, and East-West Tea is more than excited to get onboard. Moving forward, we will do our best to coordinate with administration in these conversations,” Liu, a Lovett College senior, said.

Sir David Adjaye, founder and principal of Adjaye Associates, was recently named the 2021 Royal Gold Medal recipient, an architecture award selected every year by the Royal Institute of British Architects. Adjaye told Rice News that the firm looked forward to collaborating with Rice.

“Responding to the architectural history of the university, the city of Houston and the region, the student center will come to embody its position at the heart of the campus, fostering catalytic connections between undergraduates, graduates, faculty and staff activated in both the threshold and formalized spaces of the new building,” Adjaye said.