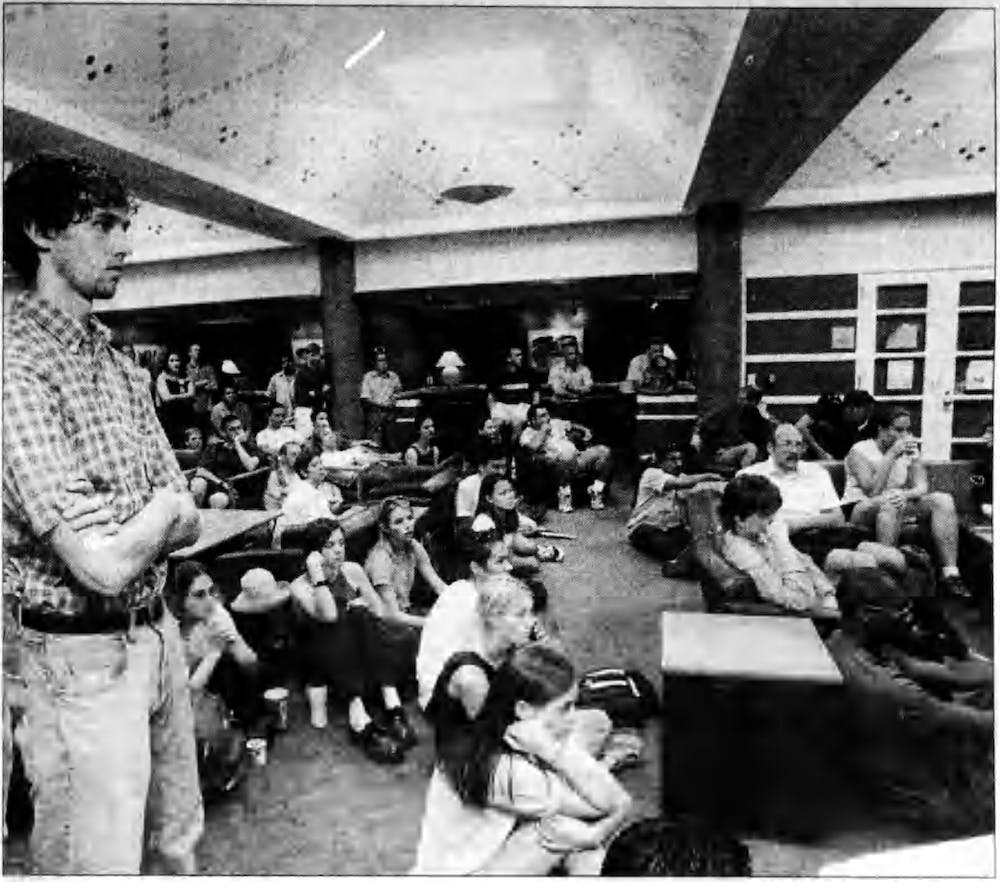 This past Saturday marked the 20th anniversary of the collapse of the twin towers and the attack on the Pentagon, and media outlets across the country are reflecting on its significance.

Twenty years ago, when the Thresher released its first issue following 9/11, the staff editorial quoted the New York Times on how to support others during tragedy: “For most of us, who cannot perform medical triage or help shift debris from smoldering building sites, what needs doing most may not be obvious. But sooner or later it will make itself known, and doing it will be more than enough.”

Now, as well as twenty years ago, the New York Times’s words ring true in the Rice community. Although the attacks didn’t occur in close proximity to campus, it is hard to overstate how deeply the Rice community was affected by the attacks. A look at the Sept. 14, 2001 issue of the Thresher highlights the aftermath of 9/11 on Rice’s campus: how our campus found out, how the administration responded and how we as a community coped.

On that Tuesday evening, the Thresher asked students across residential colleges how they found out about the attacks.

“I was walking into the commons for breakfast. My first reaction was just seeing this group of people standing around in front of the TV and I immediately knew that something horrible had just happened,” Jessica Hartstein, then a Wiess College sophomore, said. “I sat down and watched the television for 30 minutes or so and just kind of had a somber feeling.”

Another student said the news was difficult to process.

“I turned on my television to see the weather, and that’s not what I saw,” Carmen Watson, a Jones College junior at the time, said. “It was just surreal.”

Following the 9/11 attacks, anti-Muslim sentiment began to rise in the country — a sentiment that did not remain outside the hedges. According to then-Muslim Student Association co-president Ammar Ahmed, an email was directed to MSA filled with offensive questions toward Muslim students, including “some degree of intolerance and stereotyping and scape-goating.”

“We are just as disturbed by this as everyone else is, and on top of how everyone else feels from it, we have this additional affiliation that people impose on us,” Hana Khan, another MSA co-president at the time, said.

Division I conference commissioners and head coaches decided to play games as scheduled on the weekend following the attacks. However, Rice’s athletics director at the time, Bobby May, made the decision not to have Rice teams compete on that weekend and declined to play a previously scheduled football game against Nebraska.

“Clearly everybody wants to do the right thing,” May told the Thresher in 2001. “We felt this was the right thing for Rice, to wait a while before we get back in the swing of things. Other schools are taking another course of action, and we respect those schools as well.”

Twenty years later, our campus — and our world — is dealing with a different type of catastrophe, and yet certain aspects of how our community deals with tragedy remains the same.

In a frontpage article from the Sept.14, 2001 issue, the Thresher introduces the Crisis Management Team as “a group that meets in emergencies.” These days, the Thresher no longer includes a description of the team’s role, as students receive weekly COVID-19 update emails — as well as this week’s hurricane update emails — from the team.

After news of the 9/11 attacks spread, the Crisis Management team created a website to keep students informed about the tragedy — mirroring the 2020-created “COVID at Rice” page. The team also sent an email allowing professors to decide whether their class would be canceled that day — a message which was met with both positive and negative feedback.

Malcolm Gillis, Rice’s university president at the time, told the Thresher in 2001 that he thought attending class could provide some benefits.

“For some, going to class was cathartic [on Tuesday morning], and I know of some instances where classes became venues for trying to understand what is really not understandable,” Gillis said.

However, multiple students told the Thresher that they found it strange to attend classes as normal.

“I was like, ‘How can we be sitting in class?”’ Sara Nilsson, a Hanszen College senior at the time, said. “I just wanted to go to the chapel and pray.”

In a letter to the editor entitled “Rice should have canceled classes,” Jennifer Canada — a Martel College junior at the time — condemned the Crisis Management Team’s decision not to cancel classes.

“It is extremely appalling that Rice should refuse to acknowledge the gravity of such an event. Tuesday should have been a day of mourning for the entire country,” Canada wrote. “The physical blast may have only affected Manhattan and Washington D.C., but the emotional shockwave spread across the nation. It is time for Rice to acknowledge that sometimes no amount of hedges can keep out the real world.”

Although the ongoing nature of the pandemic calls for classes to continue through tragedy, there continues to be controversy surrounding the manner in which classes are held. When Rice first announced a return to some in-person classes for the fall of 2020, the Thresher published two guest opinion pieces and two letters to the editor criticizing the decision and calling for a fully virtual semester.

“Houston is in the midst of an intense COVID-19 epidemic that is getting worse by the day,” Moshe Vardi, a professor of computational engineering, said. “The conditions are bad enough that the mayor and county executive are pleading for permission from the Texas governor to declare a second lockdown. I feel compelled to share my concerns.”

Times of struggle often call for support. But for those who did not remain on the front lines, it may have been unclear how to provide this help, as the New York Times wrote in 2001. The Thresher’s staff editorial in 2001 listed ways in which students at the time did their best to help — through organizing blood drives, clothing drives, and other relief measures.

Throughout the tragedies of the COVID-19 pandemic, the Rice community has continued to find ways to support its members. Last November, after staff member Margarita Rodriguez passed away due to complications related to COVID-19, the campus mourned — with one student organizing a GoFundMe to support her family. Earlier that semester, a group of six students launched Rice Mutual Aid, a mutual aid network aiming to compile both financial and non-monetary resources in response to the pandemic.

Amid larger gestures of support, some students reached out in smaller ways. After students rushed to receive last-minute vaccine doses during the winter storm in February, some Rice students brought hot water, hot chocolate and snacks to the students waiting in the cold. One Rice alum, who stood in line for vaccines with her mother, wrote a letter to the editor detailing her gratitude for the small act of kindness.

“While the vaccines ran out before us, it was one of the few times in the last year where I felt part of a community of people, generously helping each other persevere and hold on to the hope that what we all want and need so badly is within reach if we stick it out together,” Emily Nichol,  Wiess College ‘13, wrote. “It was also just really nice. You reminded me that there are good humans — strangers — who will cheer you on when you need it.”

Looking at how the Rice community responded to the horror of 9/11 can provide us with guideposts on how to navigate grief today. Although 9/11 and the ongoing COVID-19 pandemic are two vastly different tragedies, the Thresher editorial board’s 2001 words still ring true today.

“On a personal level, we can provide comfort and strength to one another just by being around,” the editorial board wrote. “There’s a strong support system here at Rice, and whether you choose to go to a friend, a peer counselor, a master or a mentor, take advantage of being inside the hedges.”