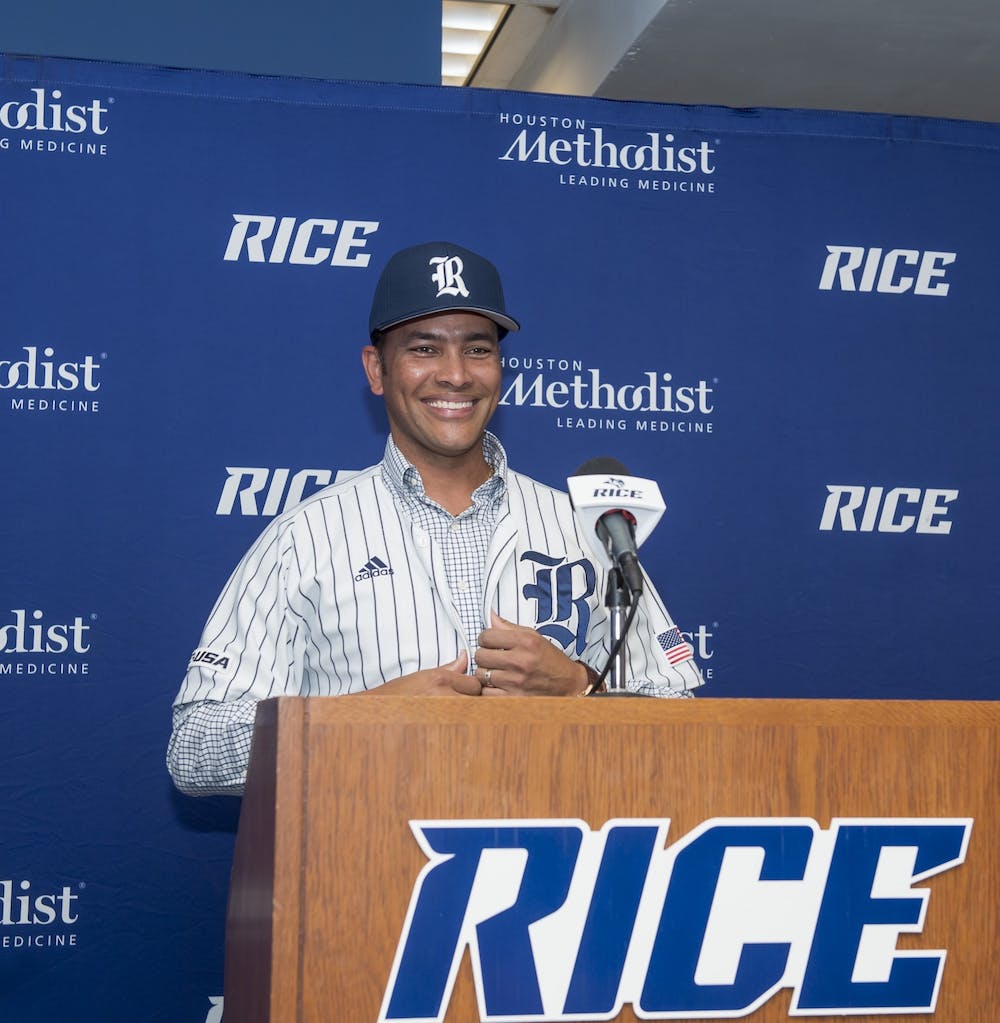 Last week, Rice announced that Jose Cruz Jr. will be its next head baseball coach, the 22nd in program history. A three-time All-American at Rice from 1992-95, Cruz will be replacing Matt Bragga, who was relieved of his duties at the end of this past season. Over the past three seasons, Bragga compiled 51 wins, 76 losses, and 1 tie over 128 games. Cruz said that returning to coach at his alma mater had been a dream of his.

“I’m ecstatic and super excited,” Cruz said. “This is super emotional for me because this is a dream come true.”

Cruz comes into the job with an extensive history with Rice baseball. A member of the Cruz baseball family, he holds a career statline of a .376 batting average, 203 RBI and 43 home runs at Rice. Cruz was also selected third overall in the 1995 MLB draft and spent 12 seasons in the big leagues. According to athletic director Joe Karlgaard, Cruz played an important role in building the Rice baseball dynasty that lasted from the mid-1990s to the mid-2010s.

“Jose Cruz was one of the architects of the dynasty that sent seven Owl teams to Omaha and won a national title 18 years ago,” Karlgaard said. “He lifted up Rice baseball as a player, celebrated the success of his brother in 2003, and sent two of his sons to play in this ballpark.”

Karlgaard said that, in addition to his contributions on the field, Cruz has been a dedicated Rice alumnus who has been very involved with Rice athletics since leaving the university.

“I wager that there were not many people who would see more Rice baseball games over the past five or six years than Jose Cruz,” Karlgaard said.  “Since returning to Houston with his family several years ago, he has remained a highly engaged alumnus. He has volunteered his time to the RBI Board and come to support more than just the baseball program.”

After being drafted by the Mariners in 1995, Cruz was traded to the Blue Jays. He made his major league debut in 1997 and spent more than a decade on a variety of major league squads. Following his time playing professionally, Cruz became an assistant hitting coach for the Detroit Tigers this past season.

According to Karlgaard, Cruz impressed those around him as the assistant hitting coach this season, including Tigers manager and World Series champion A.J. Hinch.

“A.J. Hinch described Cruz as a brilliant coach that is obsessed with baseball, who also had a clear love and fondness for Rice University,” Karlgaard said. “During the interview process, I felt the same way.

Cruz will be tasked with turning around a program that has failed to finish in the top half of Conference USA since 2017. Cruz said that despite the challenge, he is excited for this opportunity as he prepares to lead the Rice baseball program for the future.

“Being up here, it is surreal in many ways, but I am looking forward to the challenge,” Cruz said. “I am ready and my staff is going to be very much in tune with my vision and what I want to do here.”

Cruz also ensured that his tenure leading the team will be something to watch while also applauding fans for the support that he received the past couple of weeks.

“It's going to be fun to have all of the Rice nation come together,” Cruz said. “The support that I have received has been outstanding.”

In 2021, for the first time in 28 years, the Owls did not qualify for the C-USA tournament. According to Karlgaard, the hope that this hire will return the Owls to their former glory.

“[Cruz] is ready for this challenge,” Karlgaard said. “We are ready to support him and his work to bring Rice baseball forward with championships and trips to Omaha.”