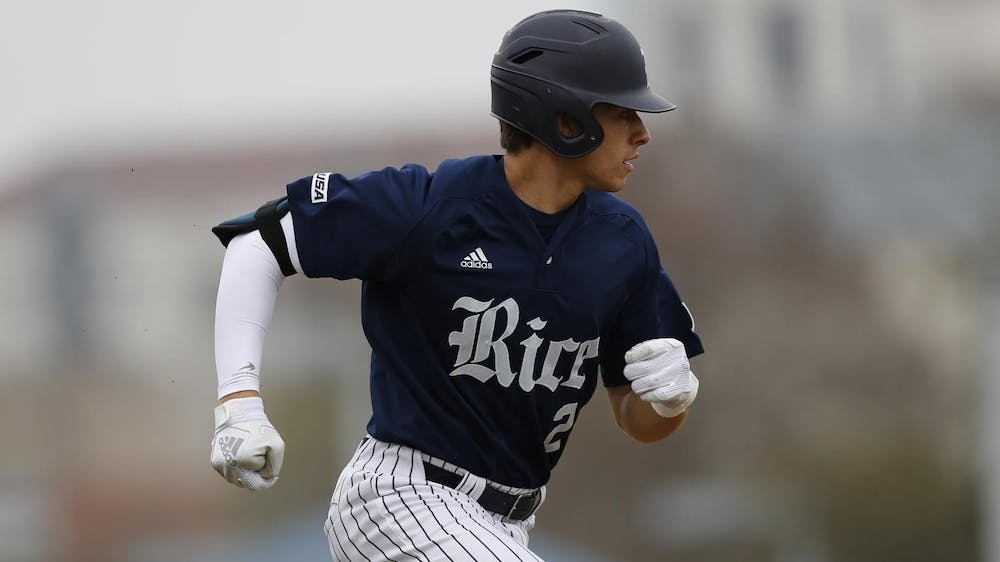 Every baseball player remembers when they first picked up the game. For most, it’s playing catch in the backyard or hitting off of a tee. But for Trei Cruz, junior shortstop on this year’s Rice baseball team, his first baseball memory is everything but normal.

“I was in Tampa Bay, my dad was with the Devil Rays,” Cruz said. “We were hitting and throwing [on the field] before a game, with a couple of other players and their sons. That was the first time I fell in love with the game; I wanted to go to every single game I possibly could.”

Cruz grew up surrounded by baseball. His grandfather, José Cruz, spent 19 years playing Major League Baseball, mostly with the Houston Astros. His father, José Cruz Jr., was a starting outfielder on Rice’s baseball team in the ’90s and played for nine different MLB teams over his 12-year career. Cruz’s uncle, Enrique, also played at Rice; he was the starting second baseman on the Owls’ 2003 national championship team. Last but not least on the field is his brother, current Owl and sophomore outfielder Antonio Cruz.

According to Cruz, having such close familial ties to baseball wasn’t always helpful.

“Having my grandfather and father play, there’s almost a target on my back,” Cruz said. “A lot of kids put pressure on me, and I kind of put pressure on myself too. But I learned, at the end of the day, I’m not piggy-backing off of my dad’s or grandpa’s [career], this is my career and it’s a completely different thing. If you play with pressure, you’re digging a hole for yourself. I just want to play free, have fun, and so I stopped listening to all the outside noise about my family … Whatever happens, happens.”

Cruz spent his childhood playing a variety of sports. He said he loved basketball and golf, in addition to baseball — Cruz played all three for as long as he could, but eventually  realized that baseball was the sport for him.

“I could live without basketball and golf,” Cruz said. “I just felt like baseball was something I always wanted to do.”

The man you see today roaming the left side of the infield at Reckling Park looks right at home, almost like he’s lived every second of his life at shortstop. But according to Cruz, that wasn’t always the case.

“I grew up as an outfielder, mostly because my dad and grandpa played outfield,” Cruz said. “Then in middle school, I started playing shortstop because we didn’t have one on my summer ball team. I made a couple of nice plays, and my coach told me I should play shortstop. My dad was all for it; he would tell me, ‘You can go from short to any other position, but you can’t go from outfield to infield as easily.’ So I started playing short, stuck with it and I love it.”

After his decision to attend Rice, which Cruz said was largely based on his ability to get consistent playing time as a freshman, the former-outfielder-turned-shortstop was pushed out of position again. Three-year starter Ford Proctor played shortstop for Rice in 2018, and so to crack the upperclassmen-crowded lineup, Cruz volunteered to play at second base.

“[Changing positions] didn’t bother me at all,” Cruz said. “We had Ford at short my freshman year; he was a great player. And as a freshman, my goal was just to play, no matter where it was. It could have been in centerfield, catcher, wherever. I just wanted to play and get at-bats.”

He was able to do just that, starting 58 games his freshman year, all at second base. Cruz was named to the Collegiate Baseball Freshman All-American Team, led the Owls that season with 40 walks and was tied for the team lead with 45 runs batted in. He finished that season with a .279 batting average, including an eight-game hit streak and an impressive .955 fielding percentage.

Although his first season was a success, Cruz said he still focused on trying to improve his game. According to Cruz, his ability to cope with failure has grown substantially since starting at Rice.

“Anyone who knows baseball knows it’s a game of failure,” Cruz said. “Growing up I struggled with it, because I felt like I needed to be perfect and to be the best player all the time. But over the last couple of years [my coaches and family have] helped me develop with the mental side of baseball and how to deal with failure. Because you can fail seven out of ten times and still be great … Not letting [failure] consume me has made me a better player.”

Cruz’s sophomore season was even better than his first. He moved back to his home at shortstop and rewarded the Owls with a .305 batting average, 71 hits and a .519 slugging percentage. He also blasted nine home runs and added 44 RBIs. In one game against the University of Rhode Island, he went 4-for-6, swatting two home runs and two triples. The nine RBIs he amassed that day was the second-highest single-game total in school history — just one behind the Rice record of 10 RBIs, set in 1995 by his father.

Despite his success over the past two seasons, Cruz said he does not think he’s achieved “superstar” status at Rice.

“I’ve always been taught to stay humble, no matter what,” Cruz said. “I could be ranked the No. 1 player in the nation, and I still wouldn’t think I’m a superstar. I always think I can be better, and I’m not in the big leagues yet. I could be [an] all-star in the big leagues, and I won’t even think of myself as a superstar. Because even then, I can always try to get better.”

Still, a player of Cruz’s caliber does have dreams, and he said his dreams include one shared with every amateur baseball player: the MLB draft.

“My whole life since I started baseball, I’ve always thought about the draft,” Cruz said. “I don’t pressure myself with the draft, thinking about [specific] rounds or picks, but I always think about it. Because that’s my dream, to play Major League Baseball. And the fact that it’s so close, it’s so surreal that it’s happening so soon. But I don’t let it consume me. I just take it one day at a time, whatever we’re working on in practice, or whatever I need to work on that day. Whatever happens in the draft, happens in the draft; it’s not completely in my control and I’m just grateful to have the opportunity.”

If the commissioner calls his name in May, and he decides to forgo his final season of NCAA eligibility, Cruz would be one step closer to becoming part of the fifth grandfather-father-son combination the MLB has ever seen.

According to Rice head coach Matt Bragga, the question is not if Cruz will play in Major League Baseball, but when.

“[Cruz] is on a different level right now,” Bragga said. “Having been around this game for so long … Trei is every bit of what a first-rounder looks like. He made a play yesterday in the six-hole, you just don’t see that play made. In batting practice, the way the ball comes off of his bat is just different.”

Following his senior year at Episcopal High School in Houston, the Houston Astros selected Cruz in the 35th round of the draft. This past May, Cruz was selected again, this time by the Washington Nationals in the 37th round. Instead of entering the minor leagues, Cruz opted to return to Rice, trying to repeat his uncle’s success and lead the Owls back to the College World Series.

“I don’t want to be consumed about me and the draft; I want to be thinking about where our team is, come May,” Cruz said. “I want to win a conference championship; I want to get to Omaha. Those are the things I have in mind for this season.”

As the presumptive three-hitter in the lineup and the captain of the infield, Cruz is a de facto leader of the 2020 Owls.

“Trei’s been growing; he’s become a great leader for our team,” Bragga said. “The guys look up to him, in part because he is such a good player.”

But Cruz sees his job as more than that. According to Cruz, he needs to be an example for all of the younger players, including his brother, regardless of whether or not he’s playing well.

Individually, Cruz continues to excel. Last week, Cruz was voted the Conference USA Preseason Player of the Year in the league’s head coaches’ poll. His name was also mentioned on an NCAA list of player-of-the-year contenders at every positionn. Cruz said he’s set his sights high for this season.

“I want to be Player of the Year; I want to be an All-American,” Cruz said. “Every award a shortstop can possibly get, is what I am striving to get. Just shoot for the stars, and see what happens. And whatever awards come my way, I’m grateful for all of them.