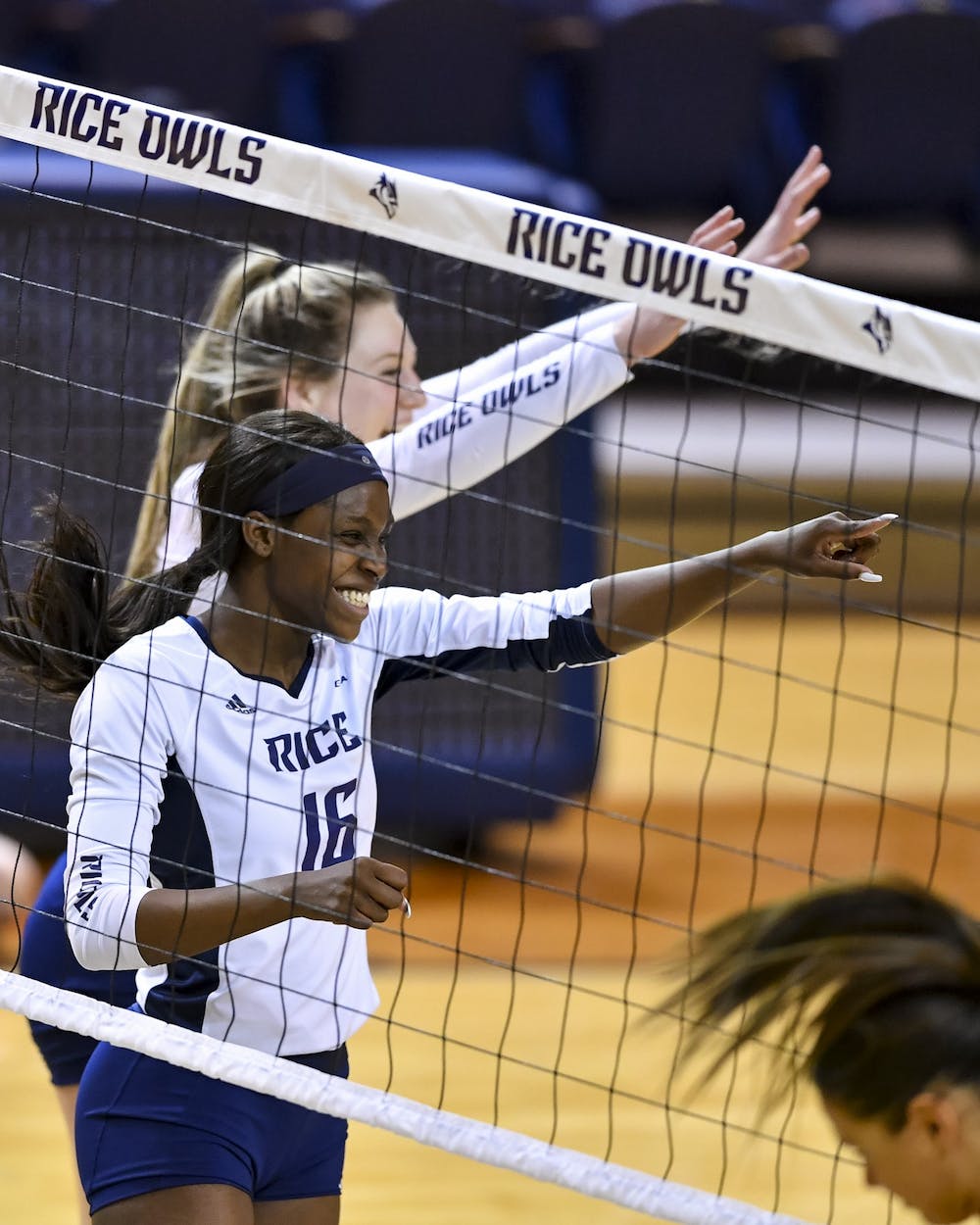 After having their season delayed five months, the Owls set off on a journey that ended with an undefeated conference season, an overall record of 14-4 and a momentous win against No. 2 University of Texas, Austin. Ranked No. 24 in the latest national poll, the Owls will look to build off of their success in the Conference USA tournament, which starts this Thursday.

The beginning of their season was not smooth sailing for the Owls, as they dropped three of their first four matches: one loss to the University of Houston and two at the hands of Southern Methodist University. Despite the losses, head coach Genny Volpe credits the competition for preparing the Owls for games later on in the season.

“It took us a few matches for us to settle into our roles and execute at a more consistent level,” Volpe said. “All four of those matches were played against quality competition and inevitably we really benefited from them.”

After their difficult start, the Owls opened conference play by making quick work of Louisiana Tech University at Tudor Fieldhouse, taking the opening two matches in straight sets. The Owls built upon this momentum, taking their next two matches against the University of Southern Mississippi, and then another two against the University of Alabama at Birmingham, all in straight sets, giving them a streak of 18 consecutive sets to open conference play.

While that streak came to a close in their following game, the Owls continued their strong performances, winning their next six matches to close out conference play. Volpe said that the final two matches of their conference schedule, on the road at the University of Texas, El Paso, proved to be statement wins in the Owls’ season.

“When we went on the road at UTEP and came up with two solid wins, that stood out to me as a defining moment,” Volpe said. “It’s tough to win there not only once but twice, and we did it with a strong sense of determination.”

“We were very consistent in our approach and fought out of tough situations,” Volpe said. “We had to fight for every win, and although we have had great seasons in the past with maybe one or two losses, having an undefeated season is something very special and says a lot about this team’s focus on the process, not the result.”

However, the Owls’ regular season was not yet complete. They still had to host No. 6 Baylor University, before going on the road to take on No. 2 UT. The Owls got out to a 2-1 lead against the Bears, but were unable to close out the win, losing in five sets.

The Owls ended their regular season on the road against the undefeated No. 2 Texas Longhorns. After dropping the first set, the Owls fought back to take a 2-1 lead. Texas managed to force a fifth set, but the Owls pulled off their second upset of UT in as many years by taking the final set 15-10. According to junior setter Carly Graham, the Texas win was a true team effort.

“We went into that game knowing how great of an opportunity it was to play the second-ranked team in the country,” Graham said. “Everyone on the team was locked in; [we] gave each other energy to win that match.”

On a team of mostly underclassmen, senior outside hitter Nicole Lennon led the charge for the Owls. The only senior on the team, Lennon was the guiding force of the Owl offense night after night. On the season, she led the team with 334 points and 282 kills, while also ranking No. 23 nationally in total kills and No. 3 in C-USA’s conference play in kills per set with 4.12. According to Volpe, it is not just Lennon’s performance on the court that stands out, but also her leadership and energy that are infectious amongst the team.

“Nicole Lennon has been a big staple of our program for the past four years,” said Volpe. “Her ability to perform day in and day out on a consistent level has really allowed her to shine as one of the best players in the entire country. She leads with her work ethic and her positive energy which is contagious.”

Volpe also credited Graham with being the “quarterback” of the team, due to her ability to facilitate the offense. Graham led the team with 681 assists, which earned her the 27th spot nationally in total assists, and also was second in C-USA in assists per set with 10.66.

“Graham has been orchestrating our offense all season at a very high level,” Volpe said. “She is a player that can take over a match, and that the opponent has to worry about. She has willed the team to victory with her passion for the game as well as her infectious competitive spirit.”

“Adekunle is another player that we rely on for offense as well as defense at the net,” Volpe said. “She continues to elevate her play daily and is one of the most fun players to watch attack the ball.”

After their success in conference play, the Owls will enter the C-USA tournament as the No. 1 seed in the West division.

If they are able to avoid being upset in the first two rounds, the Owls will advance to the finals, where they will face the winner of the other half of the bracket. The No. 1 seed in that half is Western Kentucky University, who are currently ranked No. 19 in the country. While they haven’t played the Owls this season, the Hilltoppers have been a thorn in the Owls’ side in recent years. Last season, the Owls’ only C-USA loss came against the Hilltoppers in five sets. The two teams met again in the C-USA championship game, which WKU once again won in five sets.

As the age-old saying goes: A smooth sea never makes for a skilled sailor. The Owls will look to use the experiences and lessons from their previous matches against formidable foes like Texas and Baylor as they enter the conference tournament with their sights set on a C-USA championship.

“Our team goal is to win the conference tournament and get the automatic bid to the NCAA tournament,” Lennon said. “We have worked so hard this season and would not be satisfied with anything less.”

The Owls will take on the East division’s No. 4 seed, Middle Tennessee State University, on April 1 in the quarterfinals of the C-USA tournament in Hattiesburg, Mississippi.