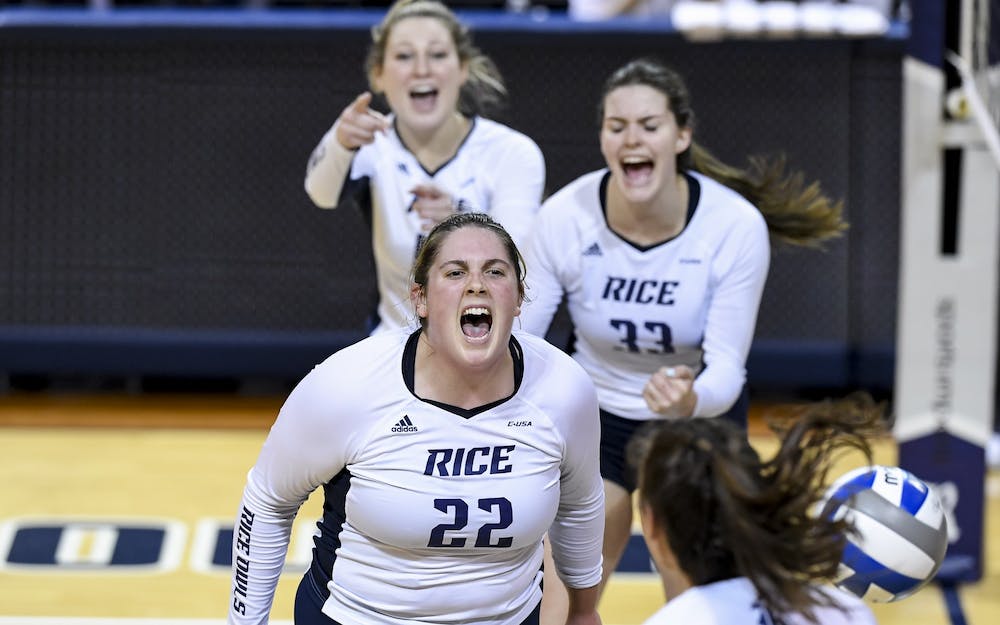 The Rice volleyball team began conference play with back-to-back matches against Louisiana Tech University on Sunday and Monday, winning both in straight sets. The wins improve Rice’s record to 3-3 on the season, and give them a strong start to conference play. According to junior setter Carly Graham, the team came into the series energized, and it showed on the court.

“We had a lot of energy on the court and on the bench,” Graham said. “That’s something that we wanted to focus on, and I think [the wins gave us] a boost in [energy], and we’ll try to keep that momentum going forward.”

On Sunday, the Owls quickly put the game out of question. After splitting the first 16 points of the first set, Rice broke the 8-8 tie, winning 17 of the next 21 points, and taking the first set by a score of 25-12. From there, the Owls cruised, winning each of the last two sets by scores of 25-17. Graham led the way with 33 assists, more than twice as many as anyone else in the match. Senior outside hitter Nicole Lennon led the Owls with 13 kills, while junior middle blocker Anota Adekunle added 11 kills on just 13 attempts, giving her a match-high .846 hitting percentage. According to head coach Genny Volpe, it was the Owls’ offense that put the match out of reach.

“I was really pleased with our offense,” Volpe said. “We hit for a very high percentage the whole [series]. We hit over .400 [on Sunday], and we hit over .300 [on Monday]. If we continue to hit at that high of an efficiency a lot of good things will happen for us.”

Monday’s game was more of the same for the Owls. Through the first two sets, the Owls outscored LA Tech 50-25. The third set was much closer, with LA Tech jumping out to a 15-14 lead, but Rice closed out the set on an 11-7 run, securing their second consecutive three-set sweep. Lennon once again led Rice in kills, this time with 12, while Graham’s 30 assists nearly matched her total from the day before. Volpe said she was impressed with how the team’s setters, Graham and freshman Izzy Rawlings, who had the team’s second-most assists in each game, commanded the Owls’ attack.

“I thought that [Graham] and [Rawlings] both ran the offense [very well],” Volpe said. “I think they did a really nice job creating a balanced attack.”

According to Graham, serving has been a point of emphasis for the Owls this season, and improvements to their serving game proved key against LA Tech.

“One thing we focused on this week was serving. I think we did that pretty well. We’re still trying to find some consistency with that, but [this series] was a huge improvement.”

Before Sunday’s game, the Owls were 1-3, coming off of losses in both matches of a two-game series against Southern Methodist University. With the wins against LA Tech, who now drops to 0-9 on the season, the Owls snapped a three-game losing streak, and now begin conference play on a strong note. While the wins were a needed rebound, according to Volpe, the team can’t overreact to wins and losses, and instead has to put them into perspective.

“We try not to overreact to two losses last weekend, two wins this weekend,” Volpe said. “We’re really just focusing on how we play. Our confidence didn’t get shaken [after the losses to SMU]. [Instead], it really motivated the team to have a more focused presence in practice, and fix the things we didn’t really do well.”

The series also provided some valuable experience for a relatively young team. Volpe said that, while she has been impressed with how the team’s younger players have seamlessly stepped into the lineup, these early season games are still an opportunity for the team to grow.

“We lost quite a bit of experience last year, no doubt about it,” Volpe said. “The freshmen have done a really nice job of learning the system, and they came in very well prepared. It’s really just a matter of finding the right combination [of players] and [improving] consistency.”

Going forward, Rice will look to build off of their success against LA Tech. According to Volpe, the team is working on improving its consistency in a few key areas.

Rice travels to Hattiesburg, Mississippi for a two-game series against the University of Southern Mississippi next Sunday and Monday.