Volleyball falls to No. 6 Baylor in a five-set thriller 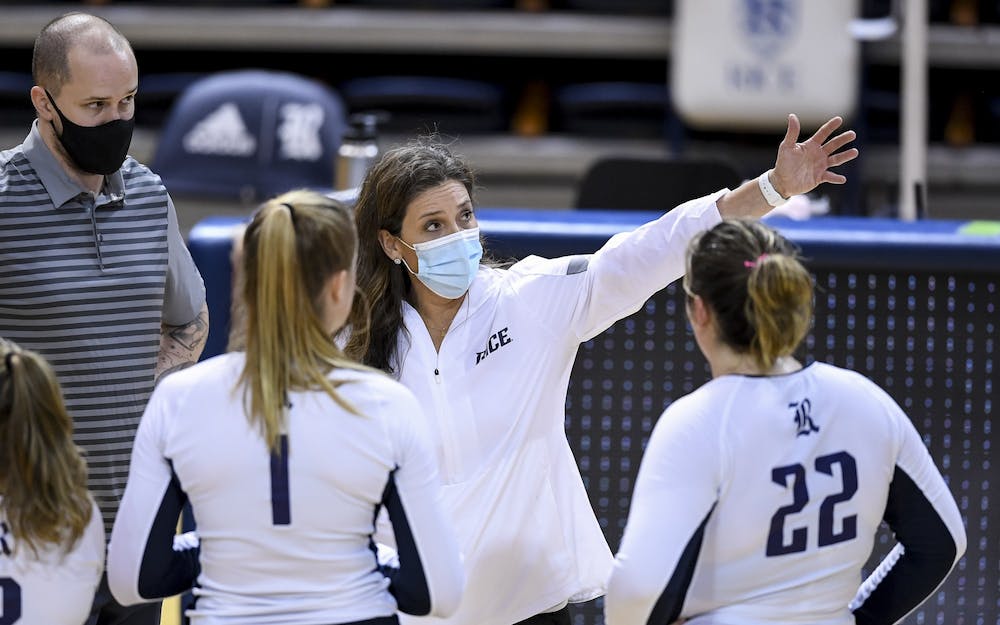 Going into Friday night’s game, Rice volleyball had won their previous 12 conference matches, which capped off Rice’s first-ever undefeated conference season. On Friday night, the Owls proceeded with their conference tournament preparation by playing national powerhouse Baylor University. The Owls got out to an early lead, but fell to the Bears in five sets. Despite the loss, head coach Genny Volpe said that the match provided opportunities to test new lineups and focus on the team’s blocking.

“We made a lot of changes today,” Volpe said. “I mixed up the lineup a little bit during the match, and sometimes coaches do that and it doesn’t work out. But it did [tonight], and it really helped give us a different look, and the players really responded to it, which I really appreciate.”

The Owls saw their 12-game winning streak snap as they battled it out to the wire against Baylor. The Owls started the match convincingly, winning the first set 25-23. Baylor responded resoundingly in the second set, taking it 25-16. The third set was closely contested, but three crucial kills in the middle of the set by freshman outside hitter Sahara Maruska sparked the Owls to take it 25-18.

“Our blocking was what we were really focusing on against this team because, offensively, they’re so strong,” Volpe said. “We wanted to make sure that we put up a good block at the net against this really strong team and the reigning [Big 12] player of the year. Our defense really played into how the match went five sets.”

Baylor withstood a ferocious comeback attempt by the Owls to win the fourth set 25-21. The fifth set had senior outside hitter Nicole Lennon’s fingerprints all over it, as she produced four of her team-high 15 kills in the final set. However, Baylor weathered the storm behind their .467 hitting percentage in the fifth set, to take the decisive set 15-10. Despite the loss, Lennon was particularly proud of the way her team fought throughout the match.

“I think what we did really well tonight was we just fought really hard,” Lennon said. “Some balls that we normally wouldn’t be able to get on defense, we were getting up. We were hustling as hard as we could so that we could make the crazy plays, and I think that allowed us to stay neck and neck with them the entire time.”

“Sahara Maruksa came off the bench and added a really strong spark,” Volpe said. “She came in and was very aggressive, got some impressive kills right away [and] added a lot to the team when we needed it. Another player that really stepped up today was Satasha Kostelecky. Of all the attackers, she had the highest hitting efficiency, she had eight kills and she led the charge with the blocks.”

In addition to those two, junior setter Carly Graham notched her sixth game with 40 or more assists, by contributing a game-high 43 assists to go along with her 13 digs.

“Carly Graham is our quarterback, and I thought she had a really nice match,” Volpe said. “She did a lot of good things defensively as we tried to integrate a balanced attack. Although our efficiency wasn’t super strong, I think she did a good job of doing her job.”

With the conference tournament on the horizon, Lennon said that this game reinforced her and her teammates’ confidence as the season winds to a close.

“This game gave my teammates and I a lot of confidence,” Lennon said. “We always knew that we could compete with the big guys, but this experience validated that for us, and it’s going to allow us to take that confidence and composure into further games as we are playing teams that are just as tough or tougher.”