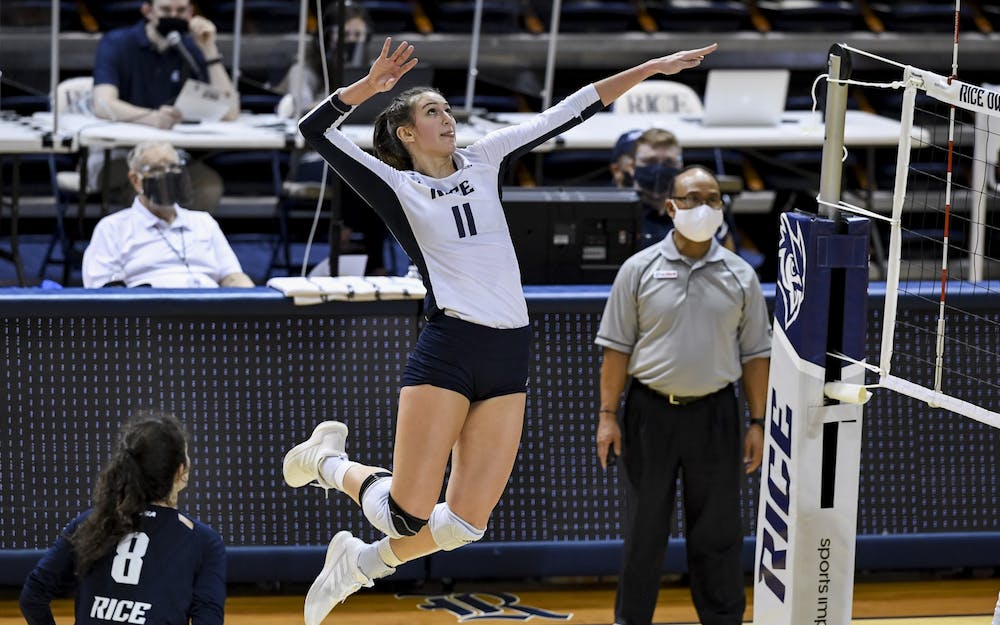 A lot has changed for the Rice volleyball team since the end of their 2019 season, which saw them earn their first top-25 ranking and the first win in an NCAA tournament game in program history. Since then, the Owls have seen several key players leave. Of their nine most-used players last year, only three remain on the roster this season. Of the five Owls to earn first or second team all-conference honors in 2019, only two remain.

Despite this turnover, the Owls return two of their most important players from last season: junior middle blocker Anota Adekunle and senior outside hitter Nicole Lennon. Both players were named all-American honorable mentions by the American Volleyball Coaches Association. Lennon was the Owls’ primary attacker, and finished No. 11 in the NCAA with 4.81 kills per set. Adekunle, meanwhile, was the team’s most efficient attacker, ranking No. 6 in the NCAA in hitting percentage, which measures kills as a percentage of attempts, with a mark of 42.3 percent.

According to Lennon, as a key returning player, she’s had to take on a new role on the team due to the changes on the roster.

“My role has completely changed,” Lennon said. “Last year we had six seniors, so they took the reins. I’ve always been more of a lead-by-example kind of person. Now that I’m the only senior, I’ve had to step into a major leadership role.”

Adekunle has also seen her role with the team change. According to Adekunle, now that she is an upperclassman, she has had to take on a more vocal role.

“I have to step up on and off the court this year,” Adekunle said. “I’m very much a quiet person and tend to [lead with] my actions. But this year, seeing that so many upperclassmen graduated, I’ve had to speak up a little more.”

Adekunle has made an impact on the court ever since she arrived at Rice. After her freshman season, Adekunle earned second team all-conference honors, and was named most valuable player of the C-USA tournament.

Last year, as a sophomore Adekunle reached new heights, improving her hitting percentage by 7.9 percent, and increasing her kills total by 130. This year, Adekunle said she’d like to improve her game by making it more well-rounded.

“This season [I’d like to] step up my defense,” Adekunle said. “I’m pretty good on offense, but I would like the same to be said for my blocking and passing.”

Lennon, too, made waves immediately after arriving on campus. As a freshman, she won C-USA co-freshman of the year, and then conference player of the year the following year. Her junior year, she upped her totals in nearly every statistical category, including kills and hitting percentage. According to Lennon, her success on the court is a product of the confidence that she has built up over the years.

“My biggest strength is my confidence,” Lennon said. “When I’m on the court, I want the ball at all times, because I’m confident that I’m going to put it away. That’s not something that really came naturally to me, but it’s developed over my years here with my years of training.”

Despite the personal accolades that her success has brought, Lennon said she remains very team-oriented.

“One of the best parts of playing volleyball is helping your teammates get a win,” Lennon said. “My teammates are my best friends and being able to bring happiness to all of us is so much fun, and it’s the reason that I play.”

As the team begins its season, they look to build on last year’s success. While the team is off to a 1-3 start, already just one loss shy of their entire loss total from last year, Adkunle said things will start trending upwards if they focus and execute.

“With this season being a little different, [due to the COVID-19 pandemic], it’s important to be intentional about the things we do on and off the court because the margin for error is very small,” Adekunle said. “We just all have to work together and lean on each other for support to make [our] goals happen.”