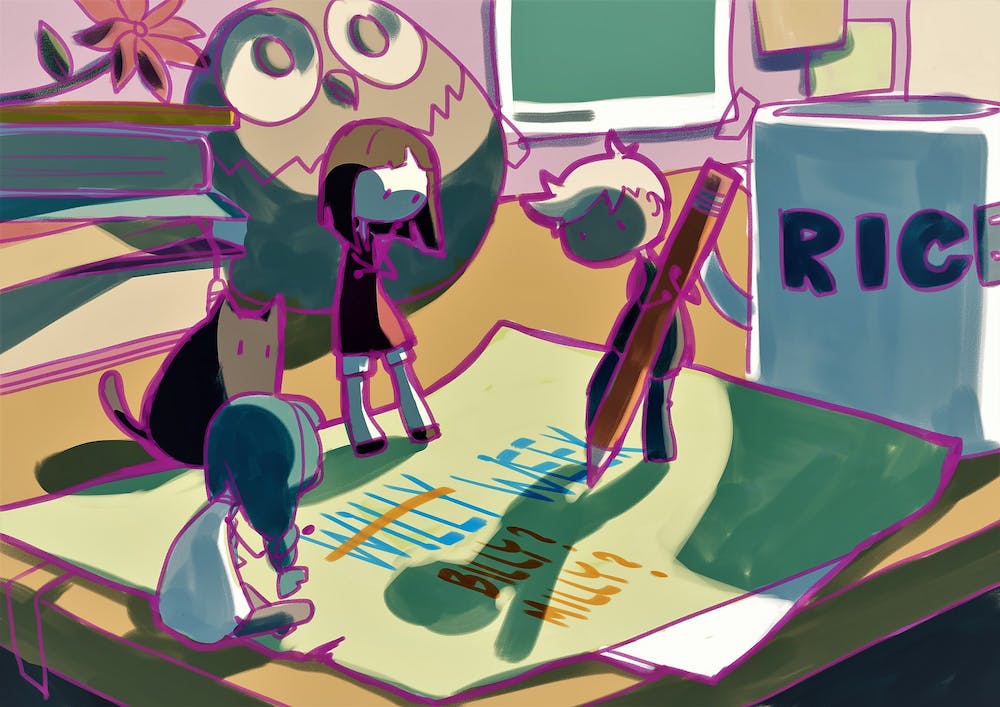 Dean of Undergraduates Bridget Gorman said that she is open to having conversations with students about changing the name of Willy Week in future years. This year’s name change was motivated by the fact that the events and the nature of Beer Bike events this year will be different due to COVID restrictions, according to Gorman.

“Early on when I was talking with the students about this, one of the things I said was, I don’t even want to call this Willy Week [because] I don’t want people to associate the typical activities with it,” Gorman said. “I know that there are growing concerns around the statue among the students … if the students feel that we need to change the terminology around that, I’m very happy to have that conversation with them.”

Lovett College has renamed their week of activities before Beer Bike “Lovett Week” this year, according to Lovett College Beer Bike coordinator Kasia Kiela. The change at Lovett College comes among a movement backed by several students across the university to have the statue of William Marsh Rice removed from the Academic Quad and for his likeness to be removed from marketing and PR materials, because he enslaved several people and excluded non-white students from his original charter for the univeristy.

“This might change to something more catchy and original in future years, but for now our intent is to show respect and give full acknowledgement to the fact that Willy Week was named after someone who did not have the equality of all students in mind,” Kiela, a junior, said. “There is no room for animosity or frustration for something so easily changed, especially when referring to what has been, and what should continue to be, one of Rice students’ favorite weeks of the year.”

Other colleges have also changed the names of the week of activities before Beer Bike to reflect a person or topic specific to their college. Jones College’s week has been renamed to JIBA Week, after the Jones College slogan “Jones Is Bad Ass,” according to Jones College Beer Bike coordinator Georgia Nevin.

“We felt that it was important to make this change in light of the discourse surrounding the university’s namesake and racism associated with it,” Nevin, a sophomore, said. “JIBA Week better represents the week’s purpose, which is to celebrate Jones College, its traditions and most importantly our Jonesians.”

“We made the decision pretty early on to change it — and if the university decides to change it later, awesome — but we want to make this change now, just for Brown College, so we can have a week that’s named after someone we respect more,” Paetzel, a senior, said. “[Brown] was a huge feminist [in] her day, a massive philanthropist, so we made the decision of, we’ll see what the university does and what other colleges do, but we just want to make this decision now for Brown.”

McMurtry’s Willy Week has been renamed to “Ratabrewie Week” this year after their Beer Bike theme for this year, according to Josh Holder, McMurtry College Beer Bike coordinator. Holder said that in the future, McMurtry might come up with another name for the week which remains constant between years.

“Our primary concern this year is taking the necessary precautions to safely celebrate Beer Bike in the midst of the pandemic,” Katona, a junior, said.

“There are still a lot of safe options for people to socialize and have fun,” Kiela said. “My hope is that everyone finds a little respite from working on homework and worrying about staying safe by attending our COVID-conscious events.”

Restrictions for college Beer Bike coordinators for hosting events include only having one four-hour event per day and one event with alcohol per week. Only three colleges can have their event with alcohol on the same day. Katona said that college Beer Bike coordinators received these guidelines from administration on March 19.

“Because of these restrictions, we’ve been scrambling to figure out which events to keep, and which to skip this year,” Katona said. “We understand that these are reasonable precautions, but we feel that the planning time frame is too rushed and communication from Rice administration has been lacking. We’ll likely have a [Fun in the Quad] on the Friday of Beer Bike Week and intend to make the most of the remaining four events. We’re also planning festivities on the day of our race to discourage students from behaving irresponsibly off campus.”

Nevin said that the Jones Beer Bike coordinators’ goal is to make the Beer Bike experience as fun and as authentic as possible while keeping students safe and complying with the university’s COVID guidelines.

“We are taking events we traditionally do at Jones during the week before Beer Bike and adapting them to fit guidelines. We are also getting creative and developing new events that incorporate aspects of normal Beer Bike traditions (i.e., water balloons), while still complying with the new guidelines,” Nevin said.

Brown College Beer Bike coordinator Anu Ayeni said as much as the coordinators would like to emulate traditional Beer Bike activities, they are also creating something special within the COVID restrictions.

“I am excited for people to see what we have planned, and we hope people can still enjoy it,” Ayeni, a senior, said. “Considering the first year and sophomores have not seen Beer Bike, this is something that everybody can still enjoy.”