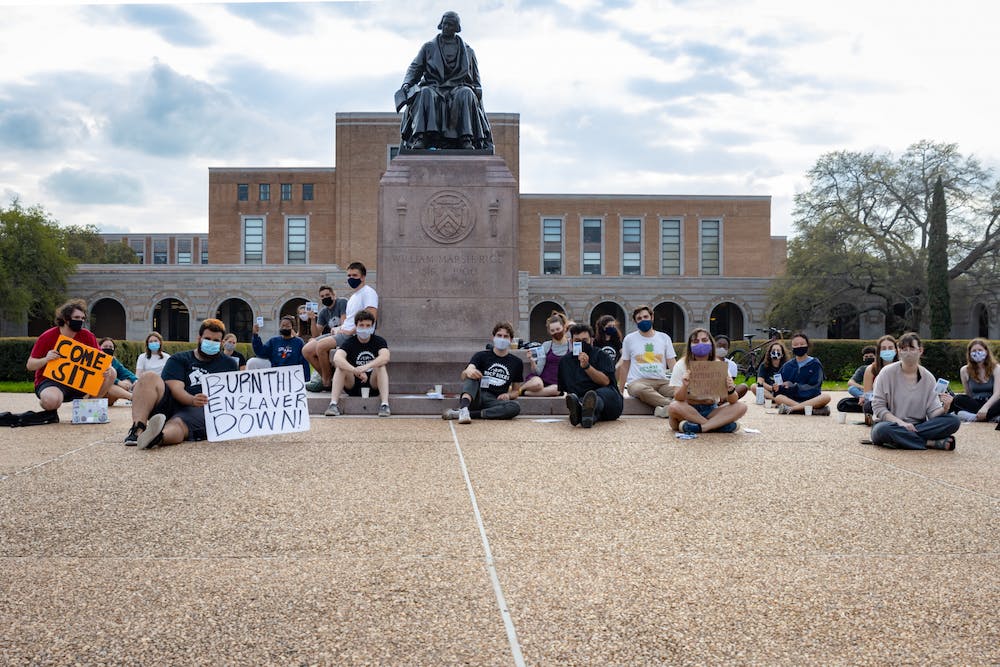 Rice Student Run Businesses collectively announced their official endorsement for the removal of the Willy Statue on social media last Thursday. Rice Coffeehouse, The Hoot and Rice Bikes concurrently released a statement on Instagram, Facebook and Twitter outlining their reasons for supporting the movement.

Each SRB detailed how it would specifically support the movement given its resources. Rice Coffeehouse, according to their social media post, stated that they will provide weekly or biweekly carafes for the sit-ins, allow advertising of the movement in their space and provide resources to their employees about the movement. The Hoot stated that they will cater a few sit-ins and will promote the movement in their space with flyers and on their TV. Rice Bikes committed to using their physical space and website to advertise and host events for the movement, and said they will provide educational resources for their customers and employees.

According to William Miles, general manager of Rice Bikes, one of the reasons that prompted the SRBs to collaborate together is the lack of action from the administration.

“The consensus of [Rice Bikes] is that the statue is an issue, and the demand from the movement is still not being addressed,” Miles said. “The university [wasn’t] really responding. The survey from [the Task Force on Slavery, Segregation, and Racial Injustice] took a while to go out. I want to use our facilities and to be able to support the movement. I think we are definitely in a position to help.”

Miles said that the SRBs are also in the process of organizing a collective sit-in of all SRB employees. Currently, 23 SRB employees are signed up for the sit in on Tuesday March 16, according to Luna.

“We decided that we should endorse it publicly starting in the spring because if we did it at the end of fall semester it wouldn’t have as big of an impact because the semester was about to end,” said Luna, a Wiess College junior.

The general managers each checked in with their employees and managers before making the decision to endorse the movement, according to Ryan Emelle, general manager at The Hoot.

“I’ve had conversations … explaining what the movement is, and why I think it’s important for us as a [SRB] to support the movement because of its importance in making people feel comfortable on campus,” Emelle said. “From there, I sent out a form asking who would be opposed to us endorsing. I got a lot of positive feedback, which pushed me to go forward with trying to do a collective SRB endorsement, and I believe the same happened with the other two SRBs.”

Miles said that the overwhelming majority of the responses he received from the anonymous poll taken by his employees supported Rice Bikes endorsing the movement.

“There were a few that chose ‘indifferent.’ Most of them also made the comment that they just weren’t as knowledgeable on the topic to be able to make an opinion, which I appreciate,” Miles said. “And I think that influenced what we do in terms of providing education and resources not just for our customers, but also for our employees.”

Shifa Rahman, the original organizer of the sit-ins, said that he also participated in coordinating the SRB endorsement.

“We all met together, and they talked about how they wanted to put it out and coordinate. They wanted to [run everything] by me … and I was obviously very supportive in terms of bringing to light what they could do for [the movement],” Rahman, a Lovett College junior, said.

Emelle said that their collective endorsement has been positively received by the Rice community.

“I was fully prepared to expect more backlash and maybe some angry alumni, typically that's how it goes when talking about the [Down with Willy movement] and taking down the statue,” Emelle said. “But as of right now, The Hoot has actually only received more positive excitement about the movement. We’ve also helped give more followers to the Down with Willy’s Insta, and so has our page. More people have liked our Hoot page because of it.”

According to Luna, other clubs and organizations who previously endorsed the movement had done so by filling out an endorsement form, and some posted on social media to publicize their endorsement as well.

East-West Tea was not involved in the collective SRB endorsement because they are not a SRB, although they are managed and staffed by students. According to Sarah Jin, sales manager at East-West, the organization does endorse the movement to remove Willy’s statue.

“As a company, we have continued to hold discussions with our employees on how to educate ourselves on combating racial injustice, and once our operations are back up and running smoothly again, we plan to take action by partnering with local organizations like SHAPE and Black Youth Empowerment,” said Jin, a senior at Duncan College.

Emelle said that she would love to plan more events with other organizations to promote the movement more, as well as potentially getting in talks with the administration.

“The whole point of this endorsement was that together we have a much larger voice,” Emelle said. “This large group of students joining together and supporting it, I'm hoping that that would catch the admin’s eye because obviously, people walk through the [Rice Memorial Center], and people go to Rice Bikes pretty often. We are very visible on campus, and so I'm hoping that that visibility will get people to notice and want to start more conversations about bringing the statue down.”

Luna discussed next steps that SRBs can take to continue to progress this movement further, including bringing attention to their endorsement in a letter to administration.

“I think there is potential for us to make a change, because SRBs are super important at Rice and to the Rice experience so us endorsing it should open [the administration’s] eyes [to] really pay attention to what the student body wants,” Luna said.