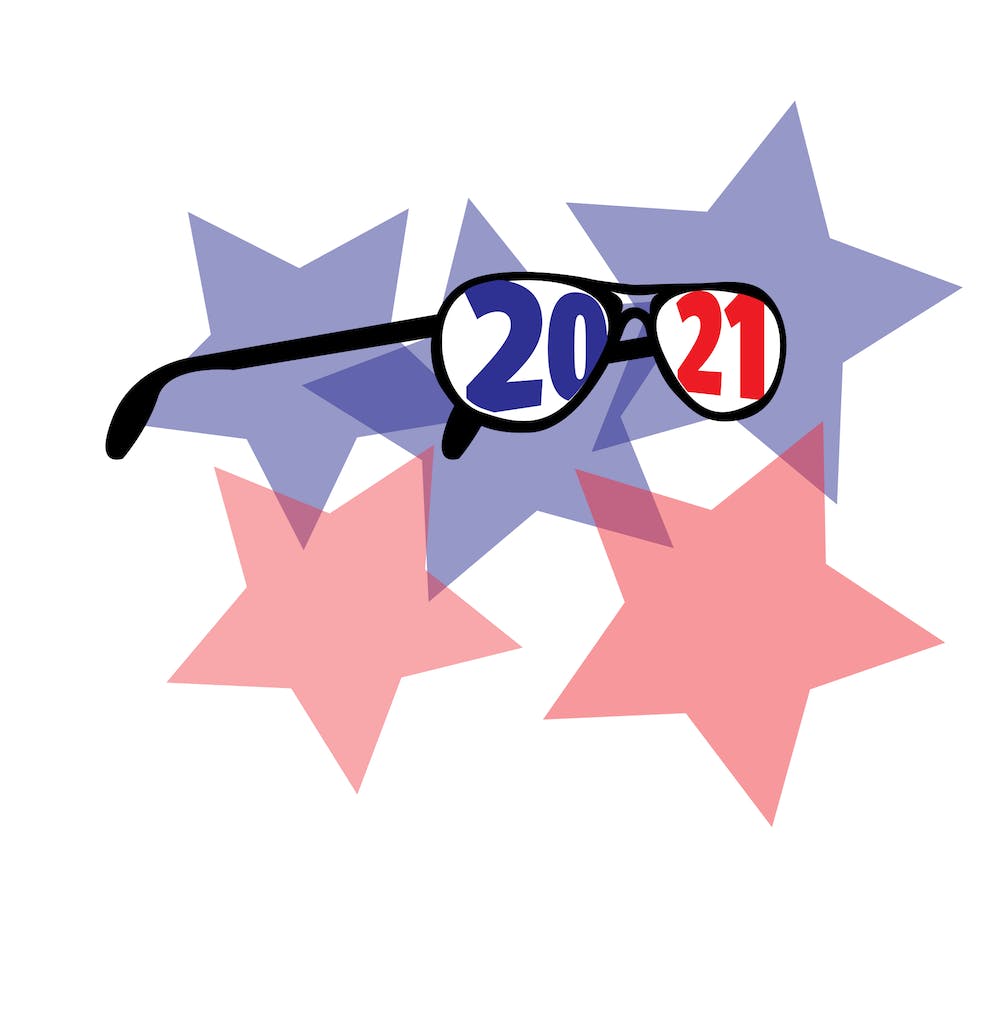 The confirmation of Donald J. Trump’s victory in the 2016 presidential election set the stage for a political rollercoaster that lasted four years. It drove countless Americans to take a stand and voice their support for and opposition to the former president, whose controversial policies and actions sparked heated debates. On campus, those conversations served as fuel for movements and organizations that sought to politically engage and inform students. Rice saw a surge in voting rates in recent years and high engagement in the past election as a result of the efforts of various on-campus clubs and groups.

Now that President Joe Biden has officially replaced Trump in the Oval Office, a few questions arise: How might students’ political engagement change during Biden’s term? What do students want to see from the new administration? And how do the ongoing pandemic and historic Capitol insurrection that kicked off this year affect all of this? The Thresher spoke with six students to find out.

Everyone has their own hopes and fears regarding the new administration, especially as we enter the second year of a pandemic with many open social and political wounds.

Hannah Young, a Wiess College sophomore, says she hopes to see more significant social and political progress during Biden’s presidency, praising the whirlwind of executive orders he has already passed, including his order to rejoin the Paris Climate Agreement.

Shawn Zheng made clear that he, too, hoped to see the administration make good on their promise to implement a plan targeting climate change. The Hanszen College junior also spoke about the pandemic, with “wishes of a comprehensive and substantive framework for COVID-19 mitigation, which is already underway.”

For Wills Rutherford, a Will Rice College junior, balancing the budget is top of mind — but he’s not hopeful Biden will seek it.

“The national debt is the highest since World War II and borrowing large sums of money from China to fund unnecessary bureaucracy only complicates our political standing,” Rutherford said. “I fear that Biden will greatly expand the government’s size and implement expensive programs that will — like much bureaucracy — be exploited and not provide much benefit to the people it seeks to help.”

A number of students who spoke to the Thresher expressed their desires for a new approach to the worsening pandemic. Kate Frucht, a Baker College freshman, said that current case numbers in the U.S. necessitate immediate action.

Michelle Gachelin, a Sid Richardson College freshman, said she is trying not to get her hopes for the next four years up too high. Just because Biden is now president doesn’t mean the country’s problems are going to vanish.

“This has been so bad for so long,” Gachelin said. “It’s not like it’s going to be a magic fix or a quick fix now that Biden is in office, but it’s hopefully going to be easier to manage a lot of problems in the country with a different person in charge.”

Other students expressed their worries regarding the administration.

“My fear is people will stop pushing for change because now we have a relatively chill kind of guy, but I’m afraid it’s going to make a lot of people stop caring,” Young said.

Like Young, Frucht has her own concerns, and a number of issues she would like to see the Biden administration address in addition to the pandemic.

“I hope that this pressing [COVID-19] issue doesn’t cause other issues to be tossed to the side,” Frucht said. “One issue in particular that I am hoping is addressed is gun control. Though schools are not running normally right now, gun control will likely once again be a problem once they are, so I hope the Biden administration makes that a priority on their agenda.”

Hadley Kruse, a Brown College junior, voted for libertarian candidate Jo Jorgensen last presidential election as a protest vote, she said, as she “did not align with either Biden or Trump’s platform close enough to vote for either.” She hopes her peers will be skeptical of promises of “normalcy” in the Biden years.

“Biden is a return to ‘normalcy,’ but that is not a good thing for most Americans,” Kruse said. “‘Normalcy’ in our political system means a return to power for the corrupt political establishment. This means more endless wars, corporate capture of government and policies that look out for the political and economic elites of society, not the average citizen.”

Across the country, organizers and activists made massive efforts to increase political engagement and participation ahead of the 2020 presidential election. According to Daphne Flores, Jones College senior and president of Rice Civic Duty, campus was no exception.

“What we saw — which I think was very different from last year — was a big surge of student organizations that perhaps aren’t typically politically engaged or address political issues, be very interested in teaching their voters how, when and where to vote,” Flores said.

Even though the presidential election is over, Flores predicts that Rice students will have continued opportunities to get involved in political organizing, such as attending educational webinars to writing letters to elected officials.

Rice for Biden, headed and co-founded by Lovett College senior Alex Vela, was another active campus organization in the months leading up to the 2020 election. Although the organization’s purpose has run its course, Vela said continued political engagement is vital moving into this year.

“Following the election, it might be easy for some people to turn off their political brain, so to speak, and just sit back. I would invite people not to do that,” Vela said. “It’s still important for everyone to be as engaged as they were before. Engagement is what leads to accountability and the good government practices we want to see. I’m hopeful that people remain engaged.”

Frucht thinks political engagement on campus will not change much, although she believes that since the election is over there will temporarily be less enthusiasm for political groups.

“Personally, I am hoping to become more involved with on-campus political groups, but that is not because of the change in administration,” Frucht said.

Kruse would like to see similar levels of political engagement — and criticism — as Rice saw in the last for years.

“I hope the students are equally as critical of the Biden administration as they rightly were for the Trump administration,” Kruse said. “Given the fact that Rice students are [mostly] Democrat according to midterm voting, it is difficult to get other perspectives from people on campus.”

Observing politics, especially during the last four years, has convinced some students of the importance of staying engaged regardless of the administration in place.

“It’s important to continue advocating and being engaged at a grassroots level,” Zheng said. “Trump being out of the White House is only a single obstacle that’s been overcome — though admittedly a large obstacle. There needs to be continued scrutiny of both the current federal administration and local politicians, regardless of party affiliation.”

Impact of the insurrection

The insurrection of the Capitol, just two weeks before President Biden’s inauguration, was an event that is still difficult for some students to process. Young said the insurrection was a wake-up call to how polarized the country is.

“I like to think most people are reasonable and decent for the most part, and then whenever I see things like the insurrection, it's just a slap in the face, a wake-up to reality,” Young said. “It's this awful reminder that there are actually people who are that deceived.”

For Gachelin, the insurrection made her rethink her own relationship with political issues.

Kruse hopes that more members of the Rice community will undergo this kind of critical thinking moving forward.

“I don't think most people fully understand the complexities of the forces that led to Trump's election in 2016, which prevents them from seeing the brokenness in our political system,” Kruse said. “I hope this is not the case and people will not forget why 2016 happened. Our conversations should be productive regardless of who is in office.”

Rutherford echoed the sentiment that political conversations on campus should be productive. For him, that means listening to a variety of perspectives.

“My hope is that campus will embrace diverse perspectives and listen to people of differing viewpoints,” he said. “An environment with homogeneous views that rejects opposing viewpoints without ever hearing them out completely will never provide the diverse learning experiences that students need to be successful in the real world.”

Some students said the insurrection has affected what they want to see from the Biden administration.

Like it was for Young, Flores said she thinks the insurrection will be a wake-up call for students, and give them another reason to mobilize politically. She is also encouraged by what she sees on social media — where she notices students having political conversations and sharing resources to learn more.

Young people are historically one of the least active voting blocs, but Vela said he is encouraged by what he saw from his peers in 2020, and thinks it can continue into the next four years.

“As students, we are often taken as a demographic that doesn’t vote, doesn’t get engaged. I’m hopeful that we can turn the script around,” Vela said. “The lesson that we’ve learned from the Trump years is that people can be engaged — it's just a decision that people have to make.”