Rice not currently planning for additional academic accommodations this semester 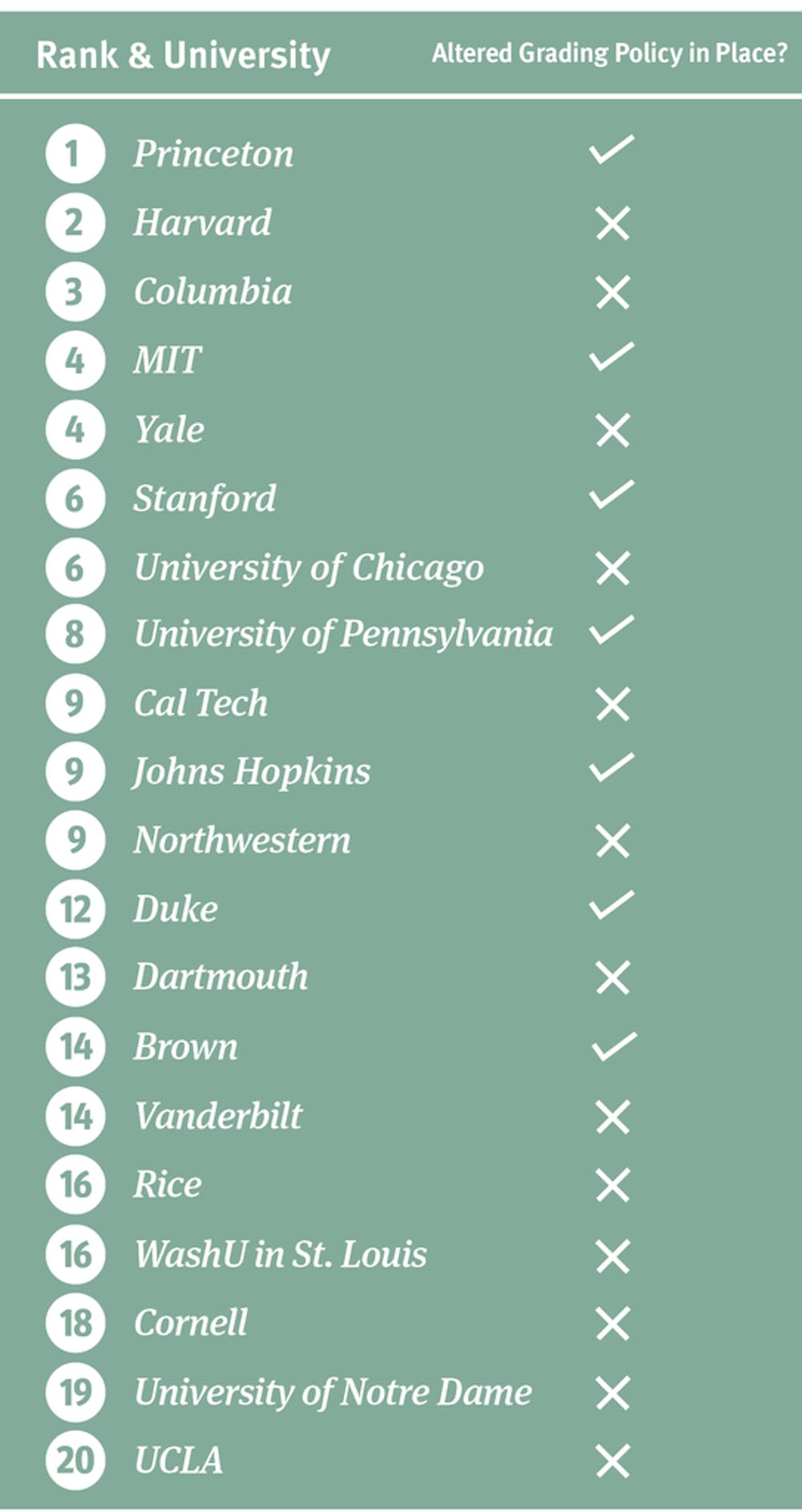 Dean of Undergraduates Bridget Gorman said that similar to most peer institutions, Rice is following its normal grading and course enrollment policies this semester.

“We are not discussing additional academic accommodations at this time, but we have strongly encouraged all instructors to administer open book, take-home finals,” Gorman said.

Among the top 20 universities from the U.S. News & World Report college rankings, seven have implemented some form of academic accommodation through an altered grading policy so far during this semester. Rice has not implemented any adjusted grading system, such as the optional pass/fail system from last semester or “no grade” if a student drops a class after the drop deadline.

According to Johns-Krull, the committee has monitored midterm grades, the results of the mid-semester student survey and the faculty survey so far. Johns-Krull said they have access to midterm grades that first-year students get, and so far things look good.

“[Additional accommodation] is something we're monitoring, but ... we want to make sure that it is the best thing to do for all students,” Johns-Krull said. “So far, we don't have strong indications that that is the case.”

Johns-Krull said the motivation for the Faculty Senate extending the drop deadline was because it is an uncertain time in general and that people’s anxiety levels are running a bit higher.

“We may be a bit more used to the chaotic state of the world, but the problems the pandemic poses are still present, and in many ways worse than the spring,” Schweissing, a senior at Martel College, said. “I think pandemic stressors are cumulative: Problems keep piling on with little hope for improvement.”

Johns-Krull said he believes a significant difference between this semester and the spring is the fact that things are not changing as quickly as last spring.

“Last semester, the uncertainty of everything was just a lot greater,” Johns-Krull said. “There was a lot more dramatic impact on students in terms of people being forced to move out with very quick notice, whereas so far, at least, what we're anticipating is that people's living situations will remain stable throughout this semester and into next year. While things are still changed, they were changed a while ago and are not changing instantaneously like they were last semester.”

Lily Sethre-Brink, the Baker College Student Association senator, said she believes that the view that accommodations are not needed this semester lacks empathy.

“Even if students do 'okay' compared to other semesters, it is definitely at a much higher cost than other semesters,” Sethre-Brink, a sophomore, said. “[Faculty] needs to recognize students don't have access to the same activities to have work-life balance [or] social networks of support in general.”

Sethre-Brink said she thinks accommodations could be a lot of things such as expansion of pass/fail policies, having a no-credit policy if students fail a course and formally ensuring syllabi are less rigorous than a normal semester.

Johns-Krull said the committee is looking at what peer institutions are doing as well.

“A few [institutions] have announced certain types of accommodations, but it appears that most of them are maintaining their normal grading policies, at least to date, but I think most institutions would tell you that they're monitoring that as well and they could change,” Johns-Krull said.

Princeton University allowed students to elect a pass/D/fail option for any of their courses this semester, without it counting against the total allocation of pass/fail. Duke University’s Trinity College of Arts and Sciences allowed departments to convert their lower-level courses to a satisfactory/unsatisfactory grading basis if they desired. The Massachusetts Institute of Technology adopted a policy in which Ds and Fs will not appear on student’s academic records, with additional accommodations specified on their website.

Harvard University, Yale University and Columbia University do not have adjusted grading systems in place. California Institute of Technology also did not enact an altered grading policy ‘to encourage students to fully engage with their coursework and to preserve the integrity of a CalTech degree’, according to their website.

Johns-Krull said that data from the registrar indicates that grades under pass/fail during the spring semester were all quite good.

“If you look at the student evaluations of instructors, they were [also] higher than average as if teachers were doing better than they normally would,” Johns-Krull said. “So it seems like [the semester] was treated both by students and faculty as kind of not real, if you will, and not normal. So, maintaining normality actually seems like it'll be better both for student and faculty performance.”

SA President Anna Margaret Clyburn said the SA began asking about academic accommodations early in the summer because they understood that students would still need that support.

“We’ve followed up throughout the semester, and have received similar responses each time: that the Faculty Senate will not be applying academic accommodations this semester,” Clyburn, a Martel College senior, said.

Clyburn said she is unaware of any SA resolution for academic accommodations currently being formed.

“A few [SA] senators have asked about one, but I don’t know of anyone who is planning to author one,” Clyburn said. “If there are any students who would like to author a resolution, they're welcome to submit one or request assistance authoring one.”

Schweissing said several of his friends have brought up the need for academic accommodations and said sometimes it feels like students are expected to have adjusted to the pandemic by now.

“I think Rice should mandate all exams to be open-note,” Schweissing said. “It's nice to think that all Rice students respect the Honor Code, but I don't think that's true. Most students do, but definitely not all.”

Johns-Krull said while it was never told to faculty as an order to provide open-book exams, it was highly encouraged.

“We recognize that given the uncertainties of the time, counting on somebody being able to be in a particular place at a particular time … is just much more uncertain,” Johns-Krull said. “And that's why we're very strongly encouraging things like take-home exams.”

Sethre-Brink said it often feels like students are forced to choose between prioritizing mental health and school during this pandemic.

“Classes should be centered on learning, not achieving some level of 'rigor' at the cost of students' wellbeing,” Sethre-Brink said. “Overall … Rice cannot hold us to the same academic standards in a literal global pandemic. It is not equitable or just.”

Johns-Krull said that an additional factor in determining if accommodations are necessary is considering the value of normality.

“Everybody that I have had these discussions with is really motivated by looking at what is healthy [for students and faculty] both from what accommodations could do, but also from what normalcy could do as well,” Johns-Krull said.