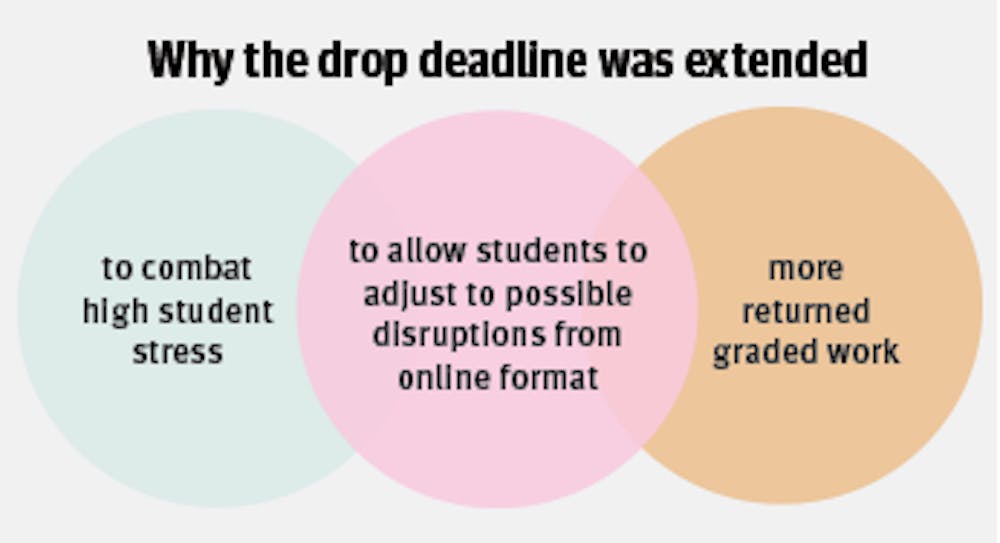 The Office of the Registrar announced on Oct. 8 that the drop deadline for the fall 2020 semester is extended from week 7 to week 10 for all fall undergraduate matriculants.

According to Christopher Johns-Krull, speaker of the Faculty Senate and the chair of the Academic Restart Committee, student voices were the reason behind this decision.

“We are starting to see more indications of student stress,” Johns-Krull wrote in an email. “We hope that by delaying the decision date, students will have more returned, graded work and so will have a better idea of how they are doing in the courses they might be considering dropping.”

David Tenney, the university registrar, said that he wholeheartedly supports the proposed change of the drop deadline.

“I was given the green light by Dr. Johns-Krull to make the change very soon after the [Academic Restart Committee]’s meeting on Thursday late morning, after which we immediately sent out an email to the Rice student community,” Tenney (Sid Richardson College ’87) said. “The dean of undergraduates and the faculty speaker have had conversations and interactions with students. They really want to hear how students are doing, and the mid-semester survey is a big part of that.”

According to Johns-Krull, it was important that the change was announced no later than the end of last week, as it was the week the drop deadline was originally planned on.

Tenney said that some students who dropped a course early in week seven might not have done so if they knew that the extension was going to take place.

“For that reason, it was arranged that our office was given the authority to put the student back in the course if asked to do so by the student,” Tenney said. “We identified the 135 drops that had taken place that week before the announcement, and emailed each student to give them that opportunity.”

Esther Yang, a Chinese international student, said she thinks the extension for the drop deadline won’t matter much to remote students, especially those who are taking classes internationally.

“I had come to the conclusion that taking six Zoom classes in China was not going to work and had balanced my workload accordingly pretty early into the semester,” Yang, a Duncan College sophomore, said. “However, I am grateful that the university has taken the action to adjust deadlines.”

Marina Karki, a sophomore from Baker College, said that she wished the extension was offered earlier, but it’s still helpful to some extent.

“I definitely feel like the pressure of classes is getting really strong right now and things are getting more difficult,” Karki said. “So the ability to drop a class can sometimes just mentally relieve some stress even if you don’t actually drop it.”

Karki said that in addition to the drop deadline, she thinks the deadline to remove a pass/fail should also be pushed back this year to give students adequate time to evaluate their performance in classes.

According to Johns-Krull, any additional changes to this semester’s calendar will likely be made by the Faculty Senate. Currently, the spring semester is an active area of discussion both in the Academic Restart Committee and in the administration.

Tenney said that he believes the spring 2021 semester will look a little different than what was originally planned, but he doesn’t anticipate that there will be any changes in the drop deadline next spring.