Reckling Park to be on-campus polling location for 2020 election 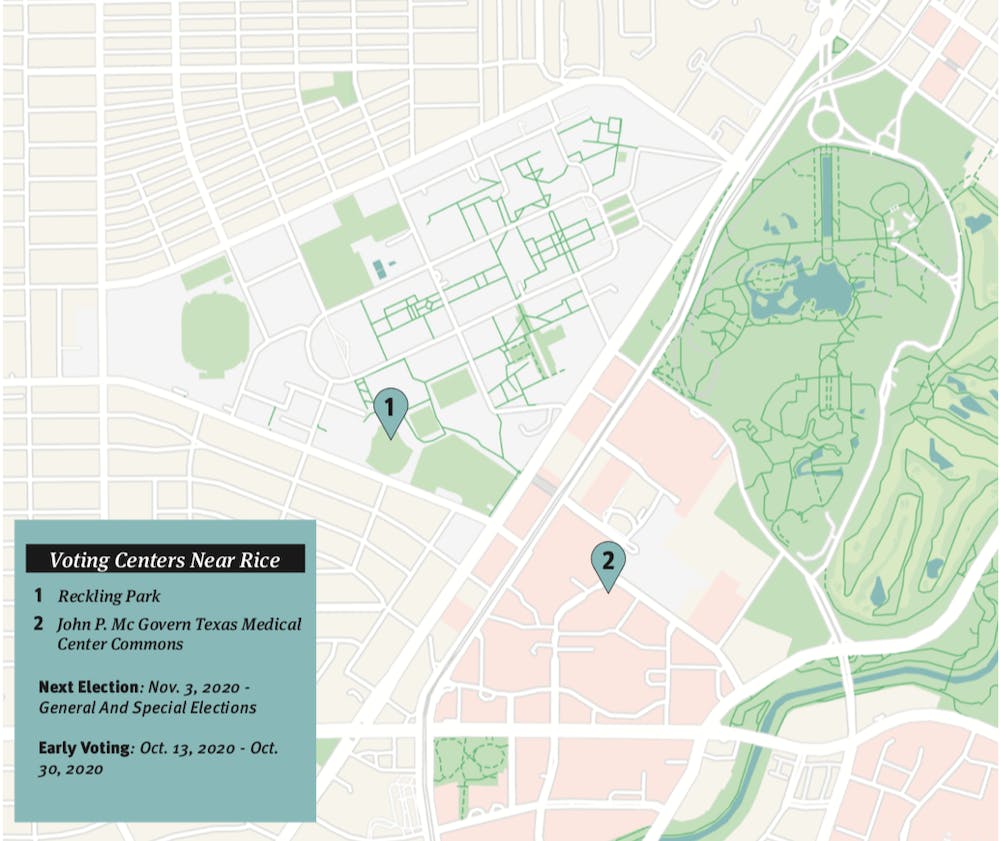 Rice’s Reckling Park will be the on-campus polling location for both early voting and election day this year, according to Lila Greiner, the media relations director of Rice Young Democrats. Harris County officials moved Rice’s polling location off-campus in February due to accessibility concerns for non-Rice voters.

Greiner said that the Rice Young Democrats had been pushing for early voting locations on campus for years. Hanszen College junior Mason Reece volunteered to serve as Rice’s first student election judge, according to Grenier.

According to the Texas Tribune, the U.S. Supreme Court overturned a decision that would have allowed voters to indicate “fear of COVID-19” as a reason to be able to vote by mail in Texas, which is one of seven states that require a reason beyond the virus for absentee voting. The Texas Supreme Court said that it is up to voters to assess their own health and determine if they meet the election code’s definition of disability, according to the Texas Tribune.

“It is unfortunate that some aspects of the pandemic have been politicized so much by both sides,” Gan, a Wiess College senior, said in an email. “If one must vote in person, I think implementation of reasonable precautions… can ensure a fully safe in-person voting experience.”

Greiner said only some voters will qualify for absentee voting in this election: those over 65 years old, those who have specific health conditions, those who are non-felons and those who are temporarily living outside of their county.

“It’s a blatant disregard for the health and safety of the people of Texas, and it’s clearly an attempt to limit voter turnout, which has been Texas’s playbook,” Greiner said. “[Texas’s] non-accommodating stance on voting by mail during COVID-19 still adds risks for people who have health conditions that do not qualify for absentee voting.”

According to Gan, the RUCR are currently encouraging their members to vote and plan to collaborate with other political and civic clubs on campus.

“One of our main goals as a club is and will always be making Rice Owl voices heard,” Gan said. “It is always a great time to both vote on issues that matter and find ways to add value to society through political action. If voting in person, be safe and smart so you can continue to keep your Rice community safe.”

Shawn Reagan, an assistant director at the Center for Civic Leadership, said that students can sign up to vote on TurboVote, an online platform that lets users manage their voting information, and get help from on-campus volunteer deputy voter registrars. Students can also consult ricevotes.rice.edu for additional voting information.

“TurboVote can mail to students a pre-stamped registration form, so that all they have to do is fill it out and send it back,” Reagan said. “Fondren Library is the most consistent place to find VDVRs. Everyone is working together across campus to help folks register on campus, off campus or at home.”

Maddy Scannell, a member of Rice Young Democrats, said that Rice students should vote early this year. Students can also check online to see wait times for nearby polling locations, according to Scannell.

“Texas has made it so that most students will have to vote in-person rather than by mail, so voting early will likely mean shorter lines and better social distancing,” Scannell, a Martel College senior, said. “Voting is a privilege that some people do not have, including individuals with felony convictions or without citizenship. We should not discard that privilege callously.”

[9/10/2020 at 1:28 p.m.] This article has been updated to clarify how Reece became an election judge, include more information about qualifying for absentee voting in Texas, and to correct that Reece is in charge of the effort to recruit student poll workers.