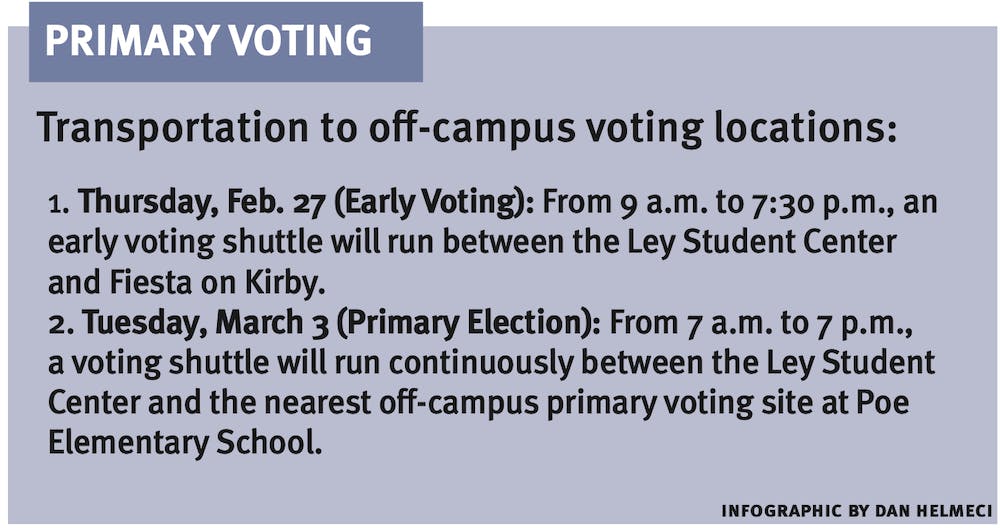 Lila Greiner, media relations director for the Rice Young Democrats, said the loss of an on-campus polling location at the Ley Student Center, combined with issues of voter suppression during the mayoral election, sends a message that Rice student voter rights do not matter.

“Rice students are markedly less likely to vote when polling locations are moved off campus,” Greiner, a Will Rice College sophomore, said.  “As Harris County allows voters to vote at any polling place, the polling center in the [Ley Student Center] was a wonderful resource for students and staff alike, one that we have been robbed of this election.”

“In bad weather this is obviously less than ideal, but even in good weather, many older voters, and voters with limited mobility, were understandably annoyed by the remote parking, and they often took it out on the Rice students who had volunteered to work the polls,” Marshall said.

Marshall said that for the upcoming March primary, Rice was notified with “very little advance warning” that Rice would be the only polling site and nearby sites would be closed.

“We reminded county officials about the parking problems faced by off-campus voters coming to Rice, and immediately offered another additional voting site at the Greenbriar building, which has good adjacent parking for off-campus voters,” Marshall said. “[County officials] chose to reopen the Poe Elementary polling site but not open the polling place on the Rice campus so, from combining precincts onto our campus, they turned to combining precincts at a location off-campus.”

Genevieve Carter, communications director for the Harris County Republican Party, echoed Marshall’s concerns about the inaccessibility of Rice’s polling location. Carter noted that the county clerk requires all primary polling locations to be shared by both parties and said that the Democratic Party officials had already agreed to the Poe Elementary location.

“A Rice location is incredibly inconvenient for anyone who does not live on campus for many reasons,” Carter said. “It’s extremely difficult to find parking, there is construction going on, and it disenfranchises voters who have been used to voting at Poe Elementary for years.”

While Greiner attributed the lack of an on-campus polling place to “pressure coming from the Harris County Republican Party,” Nisha Randle, the Harris County Democratic Party communications director, said it was due to the parking issues mentioned by Marshall.

The Rice Vote Coalition, a group started by the Office of Public Affairs more than 20 years ago, is composed of student leaders from Rice Young Democrats, College Republicans and Civic Duty Rice.

“When the county made the decision to close the campus polling precinct, despite our offer of an additional location with immediately adjacent parking which would have served the needs of off-campus voters well, the Rice Vote Coalition worked with campus groups to create a transportation option for early voting at Fiesta on Kirby and election day voting at Poe Elementary, which all agreed was the best remaining option,” Marshall said.

Meredith McCain, Civic Duty Rice president, expects student turnout to be dampened this year, but acknowledged the efforts of Rice Vote Coalition in providing transportation and publicity for upcoming elections.

“The administration, especially Public Affairs, have been very helpful in supporting the Rice Vote Coalition’s efforts to make voting more accessible for students, which we’re very grateful for,” McCain, a Duncan senior, said. “They’re providing funding for the shuttles, as well as helping us reach out to the President’s office and other departments on campus to get the word out.”

According to Marshall, there has also been a decline of trained student poll workers to staff the Rice location in recent years, but said that the Rice Vote Coalition has begun recruiting and training students to staff an on-campus polling place for future elections.

“We hope that a cadre of trained Rice student volunteers will be available to assure that Rice students can operate their own on-campus poll on campus for future elections, and that this will position us to keep the Rice polling site open for future primary and run-off elections as well,” Marshall said.