Violations observed in RMC during voting period for mayoral election 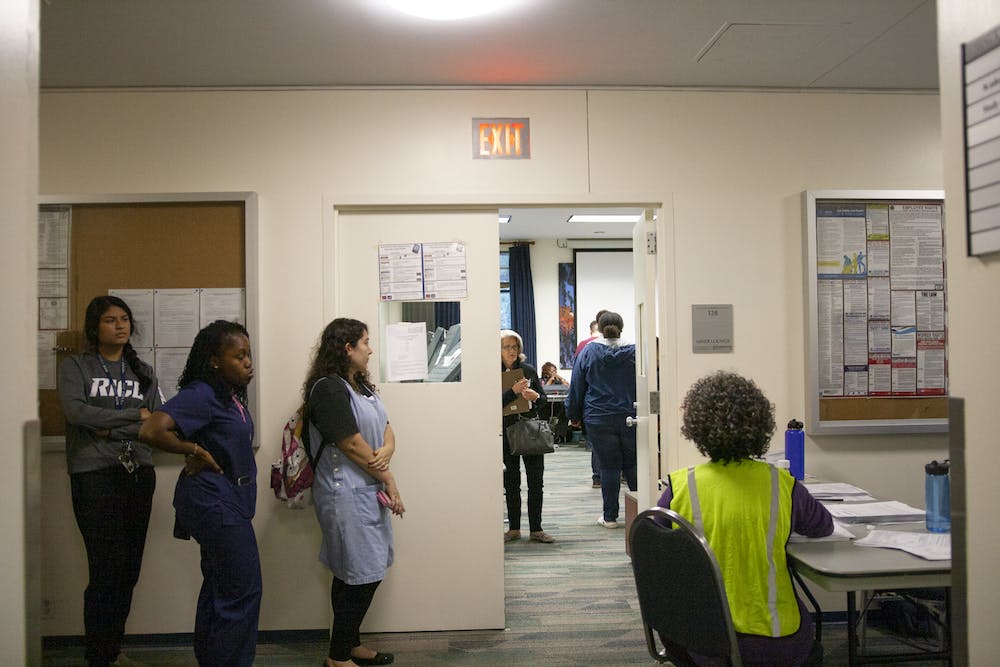 Multiple out-of-state students were erroneously asked to provide bank statements or to fill out provisional ballots for the Houston mayoral election today, according to Clara Kraebber and Hannah Kaplan of the Rice Young Democrats.

Kaplan, a Duncan College senior, said that RYD began receiving reports in the early afternoon of out-of-state students being asked to produce a bank statement in addition to their home state identification when attempting to vote at the Rice Memorial Center polling location.

According to the Texas Election Code, voters who appear on the official list of registered voters but cannot reasonably produce a Texas ID or U.S. passport can still regularly vote by signing a reasonable impediment declaration form and presenting one of multiple forms of identification, one of which is a government document with voter’s name and address.

“We request the bill statement, but since Rice is unique — most of the people are from out of state — we tried to adjust to that,” Mack said.

Kaplan and Kraebber, a Sid Richardson College sophomore, said they began to informally observe the election proceedings after reports of violations from students.

They said they approached representatives from Harris County Clerk Diane Trautman’s office who had originally come to make sure that the location was compliant with the Americans with Disabilities Act at around 3:30 p.m. Kaplan said that the representatives were receptive to student complaints and spoke to Mack about allowing registered students with one form of out-of-state identification to vote.

After the representatives spoke to Mack, Kraebber said that violations continued to occur, with more students being asked to produce bank statements later in the afternoon.

Will Rice College senior Matthew Joss, who is originally from California, said that Mack asked for a bank statement after Joss told him that he did not have his voter registration card. After he provided a statement, Joss said he was allowed to vote.

Students who were unable to produce bank statements in addition to their home state ID were then erroneously asked to fill out provisional ballots, which require the voter to visit their local voter registrar’s office within six days of the election and present a valid identification for their vote to count.

According to Kraebber, once a student fills out a provisional ballot, they are unable to vote normally — even if Mack were to later rectify his mistake.

Duncan College junior Sarah Jin, who is also from California, said she had only her Californian ID upon arriving to vote. She said she was asked to fill out two forms before being told that she would be voting provisionally and would need to go to the county office in six days for her vote to count.

“It feels like a polling station on a college campus should have clear procedures for situations like this,“ Jin said. “I’ve been registered to vote in Harris County since fall of my freshman year and I didn’t have these problems when I voted in the midterms last time.”

Kaplan said that due to a large number of Rice students being from out of Texas, the Rice polling location gets an unusual number of these cases, which resulted in RYD having to print additional reasonable impediment forms using their club funds to keep up with the number of out-of-state students voting.

“We’ve always had problems with reasonable impediment forms [because] the county doesn’t give enough to Rice,” Kaplan said. “As a polling station, we have a lot more students who vote [from] out-of-state than other polling stations.”

Kaplan and Kraebber also said that the polling location opened later than expected, at 7:30 a.m. as opposed to 7 a.m. Mack said that the location opened later than 7 a.m. but earlier than 7:30 a.m. due to problems logging into the system. To accommodate for the later opening time, prospective voters were allowed to get in line until around 7:20 p.m., according to Kaplan.

Mack, who said he has been an election judge for 15 years, said this was the highest voter turnout he’s seen.

“We never get this many,” Mack said. “I don’t know why, but everybody wants to vote. That’s a good thing. We tried to accommodate as many people as possible.”