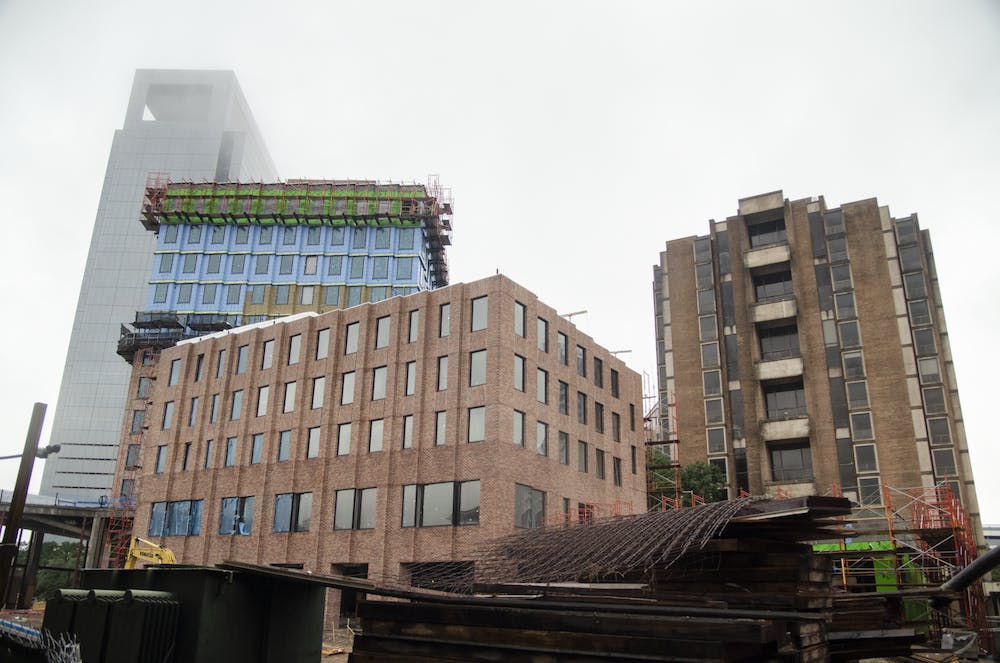 Some distinguishing features of new Sid will be a larger, more spacious commons connecting directly to Seibel Servery, as well as more public space, a large terrace on the second floor and a quad space, Gilmore said. The new Sid building will also be the tallest building on campus, surpassing the older Sid building.

The most up-to-date renderings of the final building design for the new Sid building can be found on the Sid college website.

Madison Morris, a member of the New Sid Rich Committee since it began in 2017, said that if Sid students were not on the committee, new Sid would not be a tower.

“We had to push for [the tower] and gather some support from current and past Sidizens to really emphasize how important it was for the maintenance of Sid’s culture that the new building also be a tower,” Morris, a senior, said. “We also had a say in most design aspects ... ranging from the color of the bricks new Sid will be built of, to how big of windows we wanted in the rooms ... to furniture.”

Construction hours are Monday through Friday, from 7 a.m. to 5 p.m., according to Gilmore. The weekend is used as make-up days to keep the project on schedule when delays occur during the normal work week. Gilmore said there have not been any issues outside the normal coordination and inspection issues common to any construction project.

“There have been no measurable delays related to COVID-19,” Gilmore said. “The general contractor has made adjustments to the way its workers work on-site consistent with [Centers for Disease Control and Prevention] guidelines and Rice policies related to social distancing and wearing face masks.”

Colin Chan, who lives in the New Dorm side of Will Rice College adjacent to the construction, said the construction during the spring semester was a lot noisier than it has been this semester.

“You hear a bit of banging here and there but overall, not nearly as bad as it was last semester,” Chan, a senior, said. “My roommate, who is a lighter sleeper, gets woken up occasionally. It can be a minor annoyance during the day as you are trying to watch lectures, but typically if I use headphones it isn’t too bad.”

“We are reviewing how parking space distribution will be post-construction,” Morgan said. “Once we know more, we will work with the South College parking representatives on the plan.”

Gilmore said old Sid will be used in the future as an undergraduate housing swing space, meaning Hanszen College students will live in old Sid during construction of the new wing of Hanszen during the fall of 2021 and spring of 2022.

“I’m hoping that with this change the administration will allow us to have more students on campus to the point where we don’t have to do housing jack and move people off campus,” Prince, a senior, said.

Several rooms will be compliant with the federal Americans with Disabilities Act, which means Sid will be able to accommodate students with disabilities for the first time, according to a previous Thresher article.

Morris said the floor lobbies, which are important for developing Sid culture, will look drastically different as they will no longer be double height, have balconies or be as large. Morris also said that new Sid will be primarily doubles and singles and won’t have any suites, which was the only housing option in old Sid.

“Since there are varying floor layouts with some floors being larger than others, the very strong floor culture that old Sid has will be affected and traditions such as floor wars will have to be modified,” Morris said. “I do not think these changes are negative; however … since this new layout of bigger floors and no suites might allow an opportunity for students to explore living on different floors and meet new people.”

Sid magister Michel Achard said he is excited to see how Sidizens adjust their culture and traditions to their new building.

“We will have a quad for the first time, and we are looking forward to seeing how it is used in the daily life of the college,” Achard said.

Prince said she is excited for the building to meet several needs that Sidizens have.

“From our college coordinator having her own office space separate from the mailroom, to a makerspace, to a much larger and updated kitchen, to even an outdoor sound system for us to do Radio Free Sid, I believe that this new building really meets the needs that Sid has right now,” Prince said.