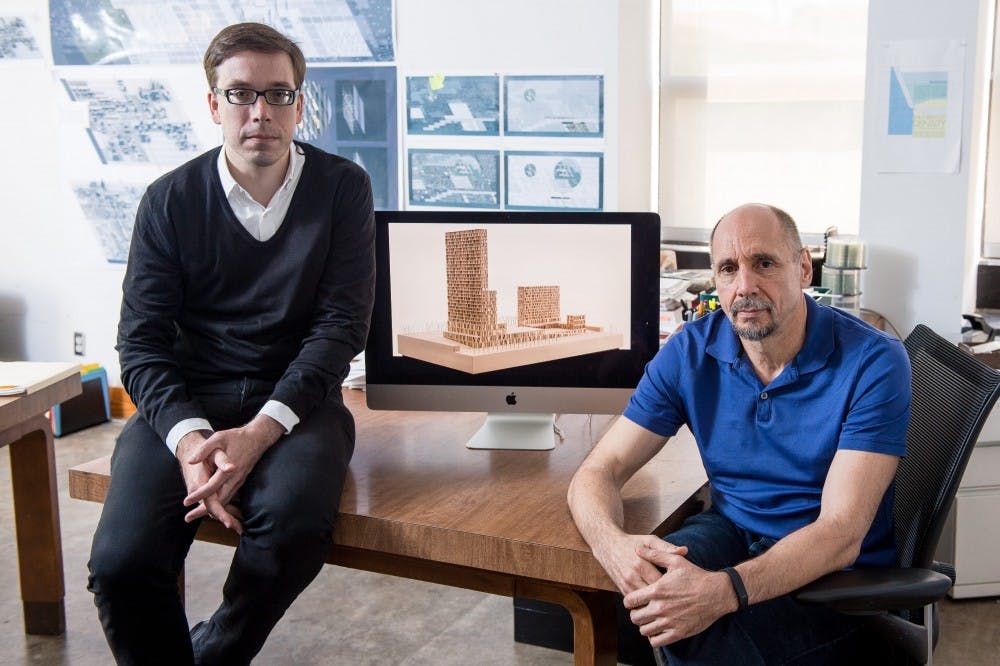 Construction of a new five-story Hanszen College dormitory made out of mass timber will begin in 2021, according to Mark Ditman, the associate vice president of Housing and Dining, and Anzie Gilmore, the assistant director for project management and engineering.

Early in August, according to the Houston Chronicle, Rice won a $100,000 grant from the Department of Agriculture to construct a building out of mass timber, a type of wooden construction material more environmentally friendly than traditional concrete or steel.

Ditman said the $100,000 grant from the USDA will only cover a “minimal” portion of the construction costs. According to the USDA website about the grant program, one of the goals of the grant is to help offset barriers unique to a mass timber construction project.

“It’s covered soft costs and the educational component,” Gilmore said. “It’s going to support things that maybe we wouldn’t necessarily have in a project budget, like educating our maintenance staff on taking care of [the building].”

“The replacement for Hanszen would be a maximum of five stories, [which] fits within building code,” Ditman said. “We love both Sid and Hanszen. Hanszen just got lucky, I guess you can say.”

Gilmore said the construction of the dorm is projected to begin in 2021 but depends on the timeline of the Sid Rich construction. Once the new Sid Rich building is completed, residents of Hanszen New Section will live temporarily in the old Sid Richardson building. Although the design period for the mass timber building will be longer than traditional construction projects, the construction process should be shorter, according to Gilmore.

Hanszen has faced a slew of maintenance and quality concerns in past years, and last year 17 beds remained open after the spring room draw.

“Hanszen has been quite vocal about the disparities in housing across campus for a long time now, so it is quite exciting to be on the road to getting a new building,” Landon Mabe, Hanszen president, said.

Mabe said a committee of Hanszenites has regularly met with H&D to discuss their visions for a building that would be compatible with Hanszen’s culture.

“[It should be] accessible, because Hanszen now does not have an elevator in either dorm building and we do not want anyone to not placed at Hanszen because they are unable to use stairs,” Mabe, a senior, said. “[It should be] attractive to upperclassmen because we have had a pattern the past couple years of a significant number of people going [off campus]. Finally, we want people to make use of our great commons and to interact with one another and not just their roommates.”

“If you believe in the effects of atmospheric carbon, [this building] is a carbon sink,” Ditman said. “If you’re capitalist and you want to encourage employment and industry, the timber industry in East Texas and Louisiana stands to benefit from this sort of construction ... And if there’s a building that’s going up next to you, the building technique is quicker and quieter than traditional construction.”

Susann Glenn, director of communications for the administration, said the innovative design of the new building will benefit the wellbeing of its student inhabitants.

“We learned while we were writing this grant that people spend 95 percent of their time indoors,” Glenn said. “And so we [want to create] spaces that make people feel better inside, that allow natural light to permeate the space [and] that take into consideration local, natural, native materials that aren’t contributing to allergen issues that people may have.”

“The first projects that were built in mass timber were completely [covered on the inside] with drywall, because developers were afraid that people would not want to be in a wood building [and] be scared that it would catch fire,” Vassallo said. “The actuality was that people love to leave as much of the wood exposed. As a construction material, it has an impact on the environmental quality of spaces.”

Vassallo said the architecture community is broadly supportive of mass timber buildings, which he said have the ability to absorb and expel humidity.

“It poses a series of environmental and economic advantages, and it also poses the possibility [of increasing] construction quality as a whole,” Vassallo said. “No one in architecture is against mass timber construction. It seems to be a no-brainer.”

Along with Vassallo and Pope, others with expertise in mass timber construction, specifically a Berlin-based design architect and the project contractor, will advise the process of designing the building, according to Gilmore.

“It’s not their first rodeo,” Gilmore said. “They have ... reached out to the manufacturers and fabricators who build [mass timber] in other places to come up with a budget for the project. It will be educational for all of us.”

Once completed, the new Hanszen building will also serve as a teaching tool about mass timber construction, still a relatively new realm of architecture, according to Ditman.

Vassallo said he hopes the construction of the new Hanszen dormitory will spur an increased regional interest in other mass timber projects, especially because Houston is a major city strategically located near a large yellow pine forest in Louisiana and eastern Texas.

“I think the building would be a catalyst for a wave of mass timber projects that will happen very quickly, immediately after,” Vassallo said. “If you trace the history of the expansion of mass timber, [it always starts in] places with a very strong forestry business.”

According to Ditman, Rice owns 70,000 acres of lumber properties in Louisiana as part of its endowment, a fact that Vassallo said could bode well for future university construction projects.

“It could actually be poetically quite beautiful if the university could grow its own buildings,” Vassallo said.