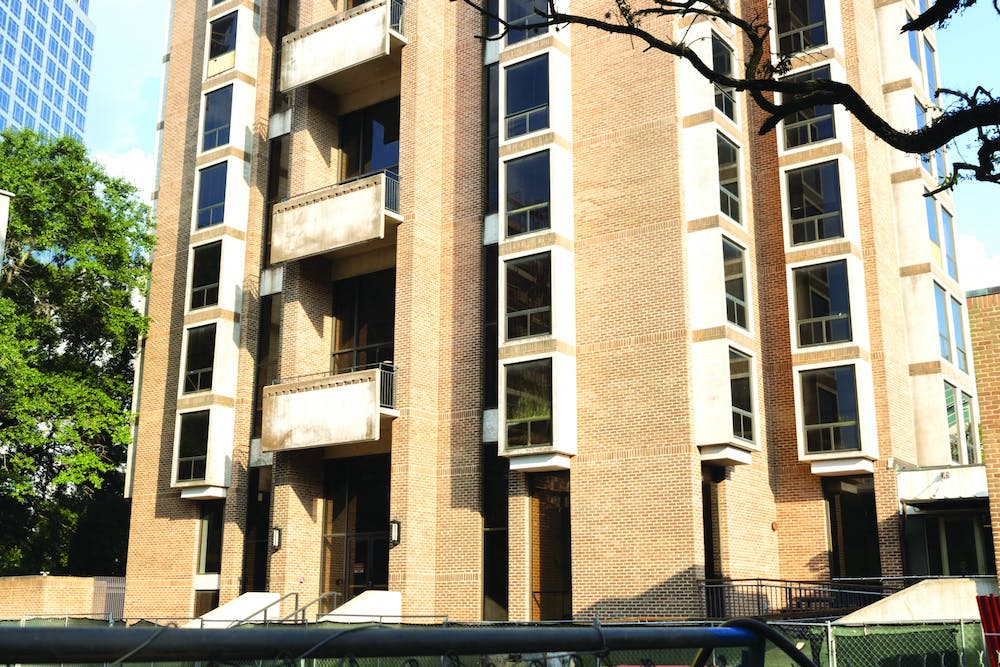 Students from Sid Richardson College who originally planned to live on campus this year, including many new students, have been reassigned to Martel, McMurtry, Duncan and Wiess Colleges based on their preference after Sid Richardson College was converted to isolation housing for on-campus students who test positive for COVID-19.

As of this week, two of the three students who tested positive during Orientation Week have been relocated to Sid Rich. Students who receive a COVID positive test will be given the option to enter into isolation housing unless they make the decision to go home and recover with their family.

According to Susann Glenn, the director of communications for administration, Housing & Dining is staffing Sid Rich with employees who have received special training. Staff working in Sid Rich have specific personal protective gear, which includes N95 masks, face shields, gloves and protective aprons. Glenn said additional training on how to safely use this equipment properly has been provided by Rice Environmental Health and Safety.

According to Associate Vice President of Housing and Dining Mark Ditman, who will be in charge of the isolation unit, he and his team are trying to make the time students spend in isolation pleasant and comfortable, including delivering meals with surprises such as Chef Roger’s cinnamon rolls or Raising Cane’s chicken fingers.

Each room is equipped with a mini-fridge, microwave, body wash, thermometers and bed and bathroom cleaning kits, according to Ditman. H&D also developed a method for delivering things from students’ friends and family. Items can be dropped at the H&D office during business hours and the staff passes them on to Derrix Norman, senior operations manager of college food service, and Ditman for delivery. H&D can also accept things dropped on Sid Rich’s front porch if they are contacted in advance.

Students remain at Sid Rich until they are medically cleared to leave by physicians in Student Health Services, who follow Centers for Disease Control and Prevention guidelines in assessing whether students are recovered and can return to their regular residence, according to Dean of Undergraduates Bridget Gorman. Students who are isolated at Sid Rich are monitored and checked daily by Student Health Services through telemedicine appointments, according to Gorman. Rice University Police Department Chief Clemente Rodriguez, the operation chief for incidents, said that Rice Emergency Medical Services will also provide those students with emergency medical care.

Construction of the new Sid Rich building is continuing on schedule to welcome Sidizens for the spring semester, according to Nia Prince, president of Sid Rich.

“It was obviously disappointing that we wouldn't be able to have our building for the fall semester, but there have been so many students that have just stepped up and really help brainstorm and make this fall semester good, and now we're just even more excited for New Sid in the spring,” said Prince, a Sid Rich senior.

Though separated into different colleges, Sid Rich students are able to live in the same area of each new college, which makes up “Sid Blocs,” according to Prince. Prince said new students are still able to develop a sense of community through these blocks.

“I think it’s really fun to connect with in-person students and remote students in this way,” Smith, a Sid Rich sophomore, said. “I think there’s a huge potential for how this process will look like in terms of social activities.”

Travis Dowd, who lives in a suite with four other Sid students at Wiess College, said he feels lucky because he was assigned to his first-choice college and he can stay with his friends on the same floor.

“Our leadership team at Sid [Rich] did an awesome job of trying to keep Sidizens at the different colleges grouped together in order to maintain our sense of community, and I am extremely thankful for that,” Dowd, a Sid Rich sophomore, said.

Besides arranging “Sid Blocs,” the student government and magisters are working hard to preserve the culture of Sid Rich while students are separated into four different colleges.

According to the Sid Rich Magisters Michel and Melanie Achard, who will be mostly working from their new home outside Rice, preservation of the Sid Rich culture represents one of the most important issues the magisters are facing this semester.

“We will be working online a lot, with many activities on the Discord channel to make sure that wherever they are, Sidizens feel part of their community,” the Achards said in an email.

Discord is a free digital distribution platform designed for creating online communities for people with various interests. Prince said the platform has a function similar to that of big room space and allows Sidizens to set up channels to play games, study together or randomly chat.

Besides virtual activities, Sid Rich has set up outdoor tents for smaller social events, according to Prince. Dowd, though missing lunches at the commons, said he looked forward to meeting other Sid Rich people at these outdoor tents.

“The main thing I will miss is the Sid [Rich] lunches where the commons felt very welcoming and lively. I would love to be involved in any resemblance of these lunches and other Sid [Rich] events that can be recreated in these tents,” Dowd said.

Besides moving social activities online, the Sid student government also transformed their Rice Health Ambassador in-person “balcony chats” to the online Discord platform, according to Prince. Through a Discord voice channel, students can just jump on and talk to an RHA who is available.

Prince said she was aware that the following academic year would be challenging since they will be moving to a new building in the middle of the year. Though being separated into different colleges would add more challenges to her role as the president, Prince said she is overall optimistic when seeing how enthusiastic Sid students are in strengthening their community and maintaining their culture.

“This year will be focusing more on the actual spirit of Sid and not just the building of Sid and that's something that we were going to have to drive home anyways this semester because I don't want them to be invested in the Old Sid tower because we're moving to New Sid tower,” Prince said.