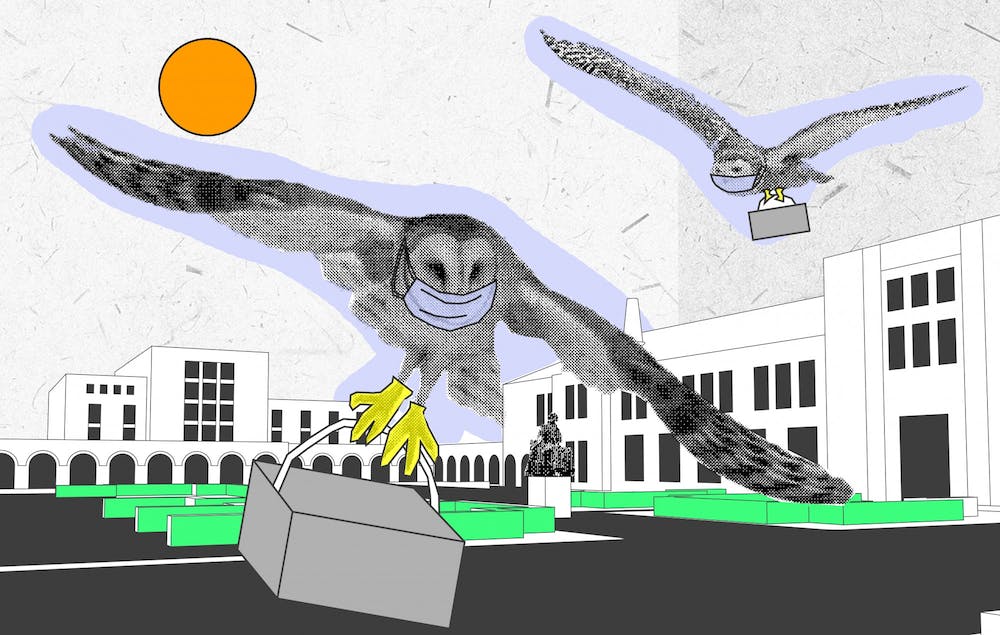 When Rice announced that classes would be going remote and required students to leave campus unless their petition to stay on campus was approved, some undergraduates had to do what it seemed like nobody in America wanted to do: travel to areas of the country with high rates of COVID-19. The Thresher caught up with students from California, New York and Washington who made the difficult decision to return home and be with their families.

When Amelia Calautti was enjoying her spring break with her boyfriend in Portland, she did not expect that classes would be moved to remote instruction for the rest of the semester.

“We were supposed to have three extra months together and now we have to do long-distance and we don't even know when we can see each other,” Calautti, a Will Rice College junior, said. Calcutti and her boyfriend Xander Abbott are just one of a number of Rice couples who have made the sudden transition to long distance.

On March 13, Calautti returned to her home in New Rochelle, New York — one of the epicenters of the COVID-19 in the United States. Early in March, an unexpected amount of novel coronavirus cases was discovered in New Rochelle, which made it the first municipality in New York state to face a COVID-19 cluster.

“I was watching the news in Portland with my boyfriend's family and New Rochelle would keep on going, coming up on the news,” Calautti said. “I was scared to come back to New Rochelle because it felt like purposely choosing to go back to such an infected place.”

Although the situation was severe in New Rochelle, Calautti ultimately decided it would be best to go straight home and be with her family as soon as possible.

“If things were to get more serious, I wouldn't be able to fly at a later date or [would] be stuck at my boyfriend’s house,” Calautti said. “It was very sad to leave my boyfriend early, but going home was the best out of precaution because we really didn't know what was gonna happen.”

Lisa Shi, who is from the Bronx borough of New York City, left Houston for home on March 17, one week earlier than she had originally planned. Shi said as the situation got worse, she was afraid that the U.S. would go on lockdown and cancel domestic flights. Since her petition to stay on campus was denied, she booked a flight home as soon as she heard the classes would be moved online for the rest of the semester.

Matthew Dai arrived home to San Jose, California on March 28, after two weeks of staying at his friend’s house in San Antonio. The Bay Area is another hotspot of coronavirus in the U.S., and has been placed in a state of emergency since March 4. Dai’s original flight on March 14 was canceled because there were not enough tickets purchased. His trip home was delayed for another week when his aunt, who had a low fever, went to hospital to get tested for coronavirus.

“Luckily, it turned out that my aunt caught something else rather than coronavirus, so I was finally able to return home after two anxious weeks,” Dai, a Baker College freshman, said.

Life in a hotspot

Surabhi Madadi, also from San Jose, noticed the unsettling quiet in her neighborhood.

“The Bay Area is pretty dense in population and usually even at 11 p.m. there will always be a lot of traffic, but now it's pretty much empty all day. Nobody's outside. Everyone's cars are parked in front of their houses,” Madadi, a Brown College sophomore, said. “At any point, you can hear the birds outside.”

In New York, troops from the National Guard were sent to help contain the spread of the coronavirus. Both Calautti and Shi noticed the streets are more empty than before. While Calautti said people in New Rochelle were strictly practicing social distancing, Shi said she doubted that many people in New York City were observing the social distancing rules.

“I feel like New York is definitely one of those places where work is the priority, so a lot of people aren't necessarily staying at home because work is more important to them,” Shi, a Hanszen College sophomore, said.

In Kirkland, Washington — another highly infected area — people are also observing the stay-at-home orders issued by the state, after a local nursing home was hit extremely hard by the coronavirus. Kyran Adams, who lives in Kirkland, said he was surprised to see more people on the streets than he used to.

“Since it is dark and rainy most of the time, people who stay at home for days have to take the two hours of sunshine opportunity to go out and exercise,” Adams, a Baker College junior, said. “So basically everyone is exercising at the same time.”

Calautti said she spent most of her time at home and she hasn’t come in contact with anybody besides her immediate family. She felt it is hard to get motivated when everyone has to stay in their house.

“Not being able to see anyone besides my family makes me feel like [I’m] losing my mind slowly; all I do is watch TikTok and Netflix,” Calautti said. “But I guess it’s nice that at least school is continuing even if it is online because that helps keep a daily routine.”

Adams said he is having difficulty completing his senior design project for his COMP 410 class. Since the whole class is based on a software development team entirely run by the students, transitioning to Zoom makes it hard to talk face to face and set up regular meetings with his group members, according to Adams.

“Now we're restarting on our final milestone and it’s been really difficult to discuss projects, set meetings up, have the right people at the right meeting, and have information told to everybody,” Adams said. “That's been really frustrating, but everyone’s handling it as best as they can so it's not like I can blame anyone.”

Shi said although her personal life is not directly affected by the virus, learning about the difficulty other people are dealing with during the pandemic makes her feel stressed.

“It’s like a very weird sense of normalcy. I’m still able to go to school and my life revolves around homework. But there's still this background sense of chaos,” Shi said. “Social media is flooded by accounts like personal stories and narratives about coronavirus. It’s really sad to learn that many nurses want to help other people, but then they're also putting themselves and their children at risk.”

Concerns for loved ones

Besides the high risk of going home, many students were concerned about potentially catching the virus before their arrival and bringing it to their families.

Adams said he was worried he could potentially catch the virus in Houston, become asymptomatic and infect his parents.

“I wasn't worried about it for myself,” Adams said. “I was honestly a little bit more worried about if I had potentially caught it in Houston and just asymptomatic, and brought that home to my parents.”

Calautti said when she came back from the airport, she completely changed clothes in her garage before entering her house and took a shower right away. Dai had to fly to a different airport because the airport near his home, San Jose International Airport, had recorded many cases of the virus. The trip from the airport to his home, which usually takes him two hours, only took him thirty minutes. When he made it home, he isolated himself from his parents for a week.

Adams said his father, who works as a forensic pathologist, is short on masks, which makes it more difficult for him to carry out autopsies. Since his father is worried about people who have the coronavirus but have not been diagnosed, he has to treat all the cases as positive coronavirus ones. The N95 face masks will not be available until June, so his father has to reuse the masks, according to Adams.

Shi said her sister, who recently quit her job as an accountant to work at a restaurant, is uncertain about the future of her career as a result of the COVID-19. As most restaurants are closed in New York, her sister is concerned about losing her job.

“After March, my sister doesn't know if the restaurant will open up, and when it opens up, how many people will take it because there are a lot of cutbacks in many fields right now,” Shi said. “I am quite worried about her.”

Despite these concerns and challenges, many students interviewed said they are aware of the privileges they have. Shi said she feels very lucky to be able to take online courses and have all the resources she needs.

“I feel like it's hard to talk about the personal challenges that I face when I know that there are so many people out there who are in much worse situations,” Shi said.

“I miss all my friends so much and like I miss my boyfriend, but I do acknowledge that other people’s situations are a lot worse, especially people who have a difficult family life or uncertainty in their housing situations,” Calautti said. “I'm trying not to fall into the pit of hopelessness and despair, so instead of lying in bed all day, I do other activities like working out and using this time to better myself and think of it more as an opportunity.”