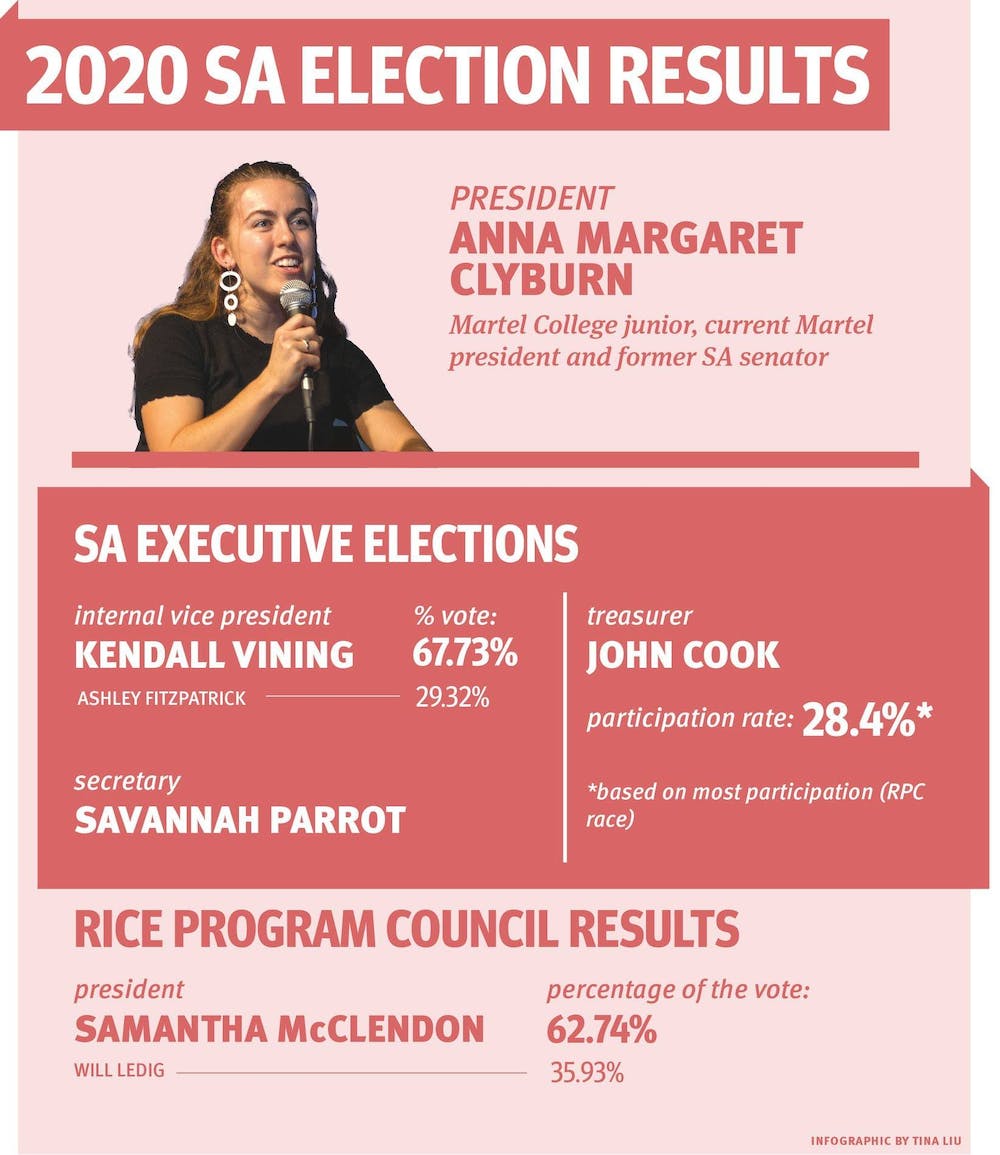 Anna Margaret Clyburn will serve as the next Student Association president after running uncontested, the first time in seven years that the race has been uncontested. With 1,082 ballots cast, which represents 27.2 percent of the student body, the elections saw significantly lower voter participation than previous years (42 percent last year and over 50 percent the year before).

In the contested SA internal vice president role, Kendall Vining won over write-in candidate Ashley Fitzpatrick with 67.7 percent of the vote. Vining, a Martel College sophomore who ran on a platform of SA reform from the inside, said that the process was more stressful than she previously imagined.

“This campaign made me lose 20 pounds in a couple weeks from forgetting to eat [or] feeling too sick to eat, like I couldn’t trust certain people, pulling two all-nighters in a row and having trouble getting my sleep back to normal after those nights … to put it simply, it was rough, and I am glad it is over so I can focus on working,” Vining said.

The other notable contested race was the Rice Program Council presidential race after a last-minute University Court hearing found Will Ledig eligible to run. Ledig lost to Samantha McClendon, the current internal vice president of RPC.

“As essentially one person backed up by a small group of random friends, this campaign not only took on a massive student organization with established connections to every residential college, but also had to undergo a tedious process just to get on the ballot that honestly took away focus from the key issues of platform,” Ledig, a Hanszen College junior, wrote in a statement on his campaign page.

McClendon, who won with 62.7 percent of the vote in the most-contested race of the elections, said she was honored to be the next RPC president.

"While I have seen RPC grow and improve in so many ways throughout my time at Rice, I know that like any organization, it is not perfect, and this race has given me an even greater sense of responsibility to evaluate events critically and particularly, to cultivate a sense of transparency for RPC in the Rice community,” McClendon, a Martel College junior, said.

For all other blanket tax organizations, which typically elect internally before the candidate or candidates file an election petition, the following students will lead:

Clyburn, the current Martel College president, received 91.2 percent of the student vote. Outside of the IVP race, the presidential race had the most write-ins with 88. Clyburn, a junior, had previously said during the Thresher town hall that voters should feel empowered to write in alternatives if they felt strongly about them.

“I’m so excited to work with everyone on our new executive team as well as with our newly elected presidents and senators to ensure that it’s a productive year,” Clyburn said.

Voting for the second round of elections, necessitated by a lack of initial interest in the SA executive vice president role, will begin March 9; the winner will be announced March 13.

Vining said that the newly-elected SA executive committee is ready for its last member.

“I am very, very excited to see who else is to join our team as the EVP — I already know a couple of people who are considering running and I am eager to see their campaigns in the special election,” Vining said. “But I’m also eager to get elections finished so our work can really get rolling.”