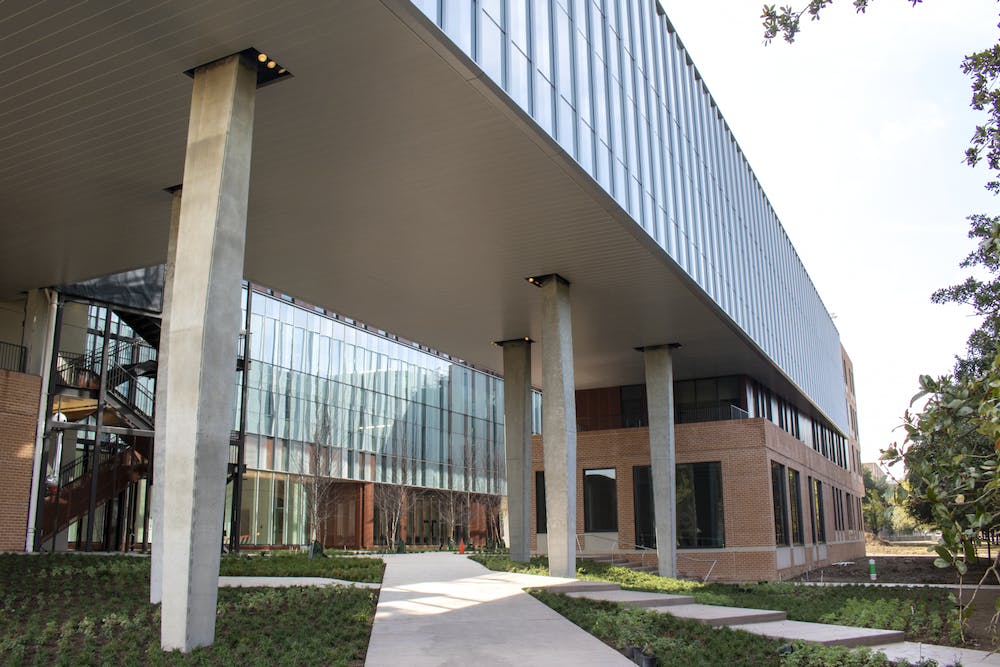 The new four-story home for the School of Social Sciences, Patricia Lipoma Kraft ’87 and Jonathan A. Kraft Hall for Social Sciences, completed a substantial portion of its construction over the break, according to Larry Vossler, senior project manager for Facilities Engineering and Planning. While classes have begun in the building, extractors and remaining debris can be seen on the grounds next to the building.

“The most prominent punch list items and other remaining work are landscaping on the back side of the building, lobby stair treads and the integration of the building card readers,” Vossler said. “Work crews are in the process of getting these things done, and none of it is affecting the functioning of the building.”

The remaining punch list work that will be completed at night and on weekends as necessary, according to Vossler.

“The building does indeed remain accessible when the construction crew works at night,” Vossler said. “They’re working at night to avoid disturbing the building’s occupants during the daytime.”

The Office of the Dean of Social Sciences, the sociology department and the economics department moved from Sewall Hall and Baker Hall, respectively, into Kraft Hall on Monday and Tuesday of last week, according to Susan McIntosh, interim dean of social sciences. The building also holds space for the Kinder Institute for Urban Research, the Houston Education Research Consortium, the Boniuk Institute and the Texas Policy Lab, according to Vossler.

McIntosh said that Kraft Hall marks an important new phase of increased visibility and opportunity for the social sciences at Rice.

“As part of the ‘policy corridor,’ with the Baker Institute for Public Policy across the street, Kraft Hall houses two academic departments engaged in research related to policy issues,” McIntosh said. “We envision that these developments will expand the opportunities for student engagement with policy-related research.”

Economics lecturer James DeNicco said he appreciates that social sciences has its own space to call home now.

“Everything is new and has the latest in technology,” DeNicco said. “My new office is really cool and has a great view.”

DeNicco said he has already seen students taking advantage of the  lounges.

“That is much different from [my former office in] Baker Hall,” DeNicco said. “I like to see students hanging around and doing their work. It creates a nice vibe.”

Arshia Batra, a Hanszen College sophomore studying cognitive science and economics, said she thinks the student lounge is a great place to study with friends.

“It gives students the option to go beyond the library or common spaces to study in a group, yet also allows for room reservations so that all students have the opportunity to use the room,” Batra said.

Students had classes in Kraft Hall starting Jan. 13, the first day of the semester, according to Chris Higgins, classroom and scheduling manager for the Office of the Registrar.

Higgins said Kraft Hall will hold classes mainly from departments that have already moved their offices to the building, such as economics.

However, Kraft Hall is not limited to use by the School of Social Sciences, according to Higgins.

Lecturer Elizabeth Cummins-Munoz, who currently teaches “A Question of Style, Rhetoric and Popular Writing” in Kraft Hall said the classroom was very accessible to her and she was pleased to teach there.

The building’s official opening ceremony in the multipurpose space will be on Thursday, Feb. 27, kicking off the school of social sciences’s 40th anniversary, according to Debbie Diamond, senior director of development and alumni relations.