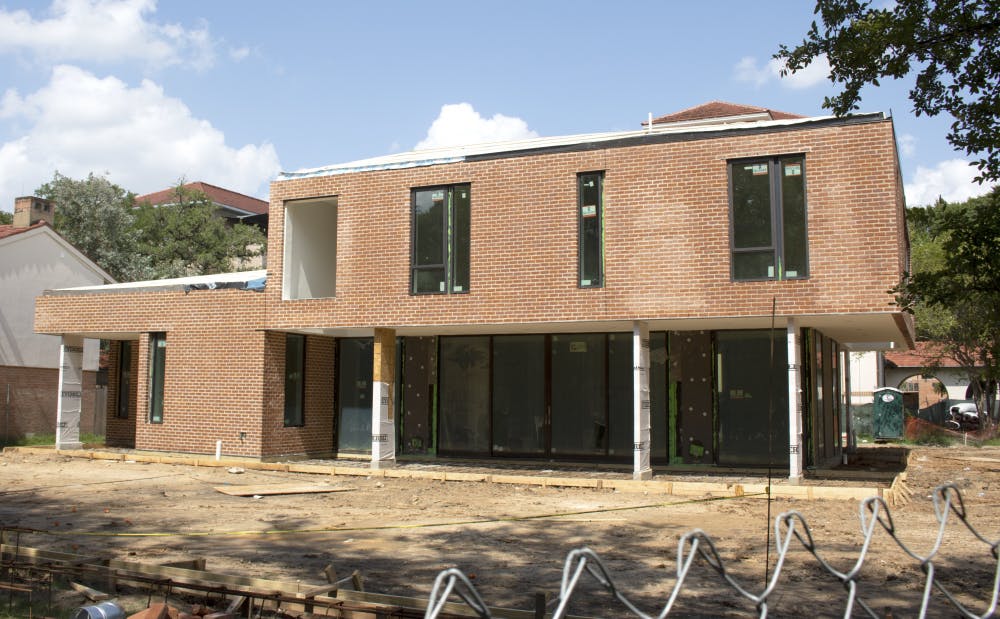 Students returning to campus this week saw a variety of construction projects underway throughout campus, from larger buildings like the Will Rice College Magister House and Kraft Hall, to general repairs on existing infrastructure.

The Will Rice Magister House began construction in fall 2018. Although the building was projected to be complete by Orientation Week 2019, construction is still underway.

Once the new Will Rice Magister House is completed, the previous Magister House will be demolished to make space for the new Sid Richardson College building.

Larry Vossler, the construction manager for Kraft Hall, said that after completion the building will be used for both office and classroom space.

According to Housing and Dining’s website, construction on Kraft Hall is expected to be completed by December 2019.

Construction on the Music and Performing Arts Center began in September 2017. Once completed, the Arts Center will be a three-story opera theater located between West Lot and Alice Pratt Brown Hall. The building will include a 600-seat auditorium and a 70-seat orchestra pit, along with backstage spaces like dressing and conductor’s rooms, a musician’s lounge and a green room.

To make space for the construction of the Arts Center, Laboratory Road was closed and the front row of parking in West Lot 4 was removed.

According to H&D’s website, the Arts Center is expected to be open by July 2020.

Construction on Rice’s Innovation Hub in midtown broke ground on July 19 this summer.  The Ion Hub will replace the old Sears building.

According to Rice News, once built, this off-campus space is intended to combine industry and academics, in order to increase discovery and benefit the Houston economy.  The building will include areas for training, classes and innovation spaces, along with entertainment and dining amenities.

According to Rice News, construction on this building is expected to finish at the end of 2020.

Construction broke ground on the new building for Sid Richardson College at the end of the summer.  According to Anzilla Gilmore, project manager for New Sid, construction should begin soon, if other construction projects remain on schedule.

“The project is expected to start on September 16, but it’s contingent on the completion of the new Will Rice Magister House project,” Gilmore said.

According to Gilmore, issues with hot water and air conditioning in the existing Sid building were partially related to the construction on New Sid.

According to Sid’s website, the New Sid building will have 12 levels, with the commons, magister’s house, admin space and multifunctional rooms on the first and second floors, and residential spaces on the 10 floors above.  Unlike the current Sid building, New Sid will include singles and doubles.

Gilmore said that the building should be completed by November 2020.

Other renovations across campus

According to Rice News, sidewalks around the academic and engineering quads were repaired, along with curbs, drains and sidewalks along President’s Road, in order to prevent flooding.

Other improvements include the replaced roof of Tudor Fieldhouse and new landscaping in Baker quad and on intramural fields. The acoustics in Alice Pratt Brown Hall and Hirsch Orchestra Rehearsal Hall were renovated over the summer as well.

According to Kathy Jones, the administration’s associate vice president for facilities engineering and planning, there are multiple measures still being taken in effort to solve issues of bike and traffic safety on campus.

“We’re performing tests with several sidewalk coatings to see if we can find a product that will reduce the slipperiness of campus sidewalks when they’re wet,” Jones said. “We’re also taking the lead on installing a device at Entrance 20 at Rice Boulevard and Kent Street that will allow us to gather data that we can use to present our case to the City of Houston as part of our request to install a traffic light at that intersection.”

Jones said that the administration also has plans to increase disability accessibility on campus.

“We’re also managing projects that will make the campus more friendly to people with mobility challenges, like installing sliding doors at the RMC and making improvements to the BRC bus stop,” Jones said.

The pathways around South colleges were repaved over the summer as well.

According to Jones, all current and ongoing projects remain on schedule.