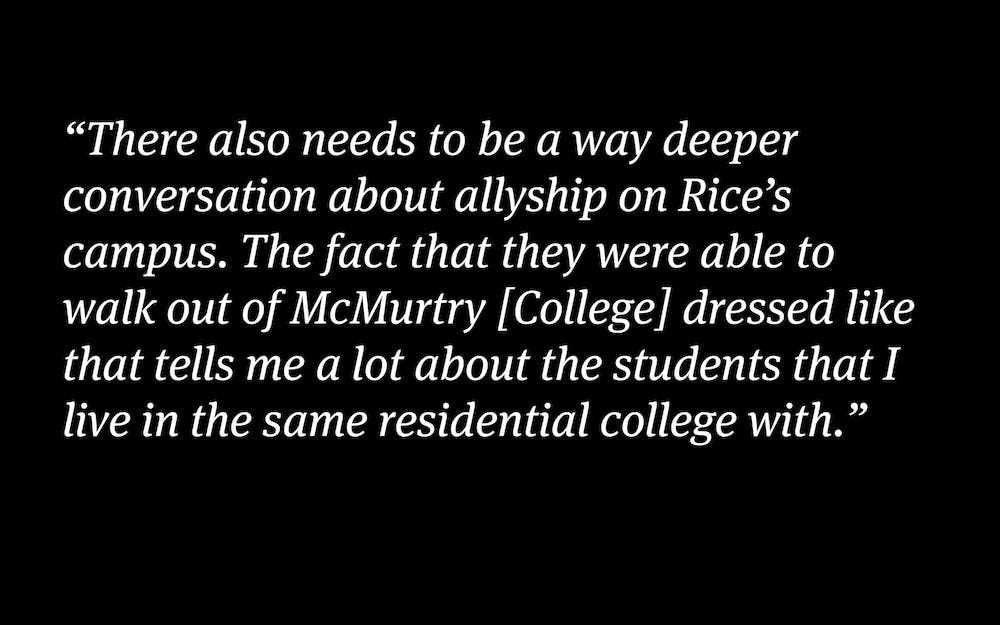 After three McMurtry College students dressed up as Immigration and Customs Enforcement agents for Halloween at Willy’s Pub last Thursday, the response in the Latinx community at Rice was overwhelming.

Kim Olea, a McMurtry College senior, said that she was about to fall asleep that night when she checked the Latinx group chat and saw a tweet with pictures of the students. After that, she didn’t sleep for hours.

“It just turned into this whole thing where we were all up for hours talking to each other about it and trying to figure out what to do,” Olea said.

Mezthly Pena, Alexus Arizola and Fernanda Lago were all at Pub that night. When they heard about the costumes, they said they immediately set out to confront the students. For Arizola, the Halloween costumes were especially insensitive when juxtaposed with the Dia de los Muertos event remembering the children who had died in ICE custody.

“Literally the next day I was going to be talking about the kids that died in ICE custody, and that just didn’t sit well with me,” Arizola, a Will Rice College sophomore, said.

Pena said that after an inconclusive conversation, during which she said one of the students avoided their questions and another minimized their concerns, she said she was shaken.

“I just left and I went into the Multicultural Center and I started crying,” Pena, a Duncan College sophomore, said.

Lago, who was at Pub with her, was also frustrated.

Olea said that hearing about the costumes made her angry because the students seemed to disregard how their actions would affect undocumented students at Rice. Olea said her past experience being undocumented made the pain all too real.

“We didn’t sort out any of our legal status stuff until right before I came to college, so I know what it’s like to live in fear that I’m going to come home and my parents won’t be there anymore,” Olea said. “I grew up with that fear, and to me it’s a very, very real fear.”

Olea said she was frustrated with bystanders in the situation, who she said allowed the incident to happen.

“There also needs to be a way deeper conversation about allyship on Rice’s campus,” Olea said. “The fact that they were able to walk out of McMurtry dressed like that tells me a lot about the students that I live in the same residential college with.”

Brenda Venegas, co-president of Hispanic Association for Cultural Enrichment at Rice, also said she was disappointed by the lack of a response from allies of the Latinx community following the costume incident.

“Rice really [prides] itself on the fact that it is an ally community, but that wasn’t apparent that night,” Venegas, a Sid Richardson College senior, said. “It was a very lonely feeling to know that people were just moving on.”

“You shouldn’t have to be proximate, to have a family member or a friend, [to care],” Carter said. “I can only imagine what students who directly dealt with intervention from ICE or students who are undocumented, the amount of fear that that would instill.”

According to a written statement to the Thresher, ally intervention prevented Ben Collier, a McMurtry sophomore, from going to Pub that night in a costume that may have offended many. Collier wrote that he decided to go to Pub at the last minute and was struggling to find a costume he could quickly put together.

“I went to the room in which the people, including the men in the ICE costumes, were pregaming,” Collier wrote. “People in that room convinced me to go to Pub, but I didn’t have a costume. People began shouting ideas out for a costume. Most of the costumes would have been difficult to put together in the 20ish minutes before we planned on leaving for Pub, but the costume of a caricature depiction of a Hispanic man seemed easy to put together as I am a Hispanic man. In the moment, I was more focused on whether or not I could put the costume together than I was on the offensive nature of the costume.”

However, Collier wrote that he soon began to realize the offensive nature of the costume.

“Looking in the mirror, I realized that my costume was not in good taste, but I did not realize the extent, so I went to ask people for advice,” Collier wrote. “I then walked back to the room in which people were pregaming to ask if the costume was offensive. People told me it was offensive, so I decided to take it off.”

Ultimately, Collier wrote that he made the decision because of how it would affect other Rice students.

Although she said she is disappointed that another student had worn an insensitive costume on Halloween, Lago said she was glad Collier eventually realized what he had done wrong.

Olea published a statement on her personal Facebook page regarding the incident at Pub. According to her and Pena, the fact that students dressed up in these costumes given the current political climate made the situation all the more frustrating.

Pena added that the comments were insensitive because they showed a misunderstanding of what it means to be Latinx in the United States today.

“I think being Mexican and coming from an immigrant family is just different than being from a European immigrant family just because of the current political climate,” Pena said. “Children and adults keep dying in custody, and it’s just really hard watching that happen to your community.”

Luis Duno-Gottberg, professor of Caribbean and film studies, said that in his time studying race relations in the Caribbean, he has noticed that being part of a historically oppressed group doesn’t always guarantee awareness of the oppression that other groups struggle with.

“That you were an immigrant doesn’t mean that you are exempt from or aware of the forms of violence that other immigrants experience,” Duno-Gottberg said. “That doesn’t exonerate you [from] the responsibility of being sensitive to people.”

The day after the incident, students and faculty gathered for a previously planned celebration of el Dia de los Muertos, honoring the children who have died in ICE custody. Pena said the events of the previous night colored her experience at the honorary celebration.

“It was really sad because the altar was [dedicated to] the children that died in ICE custody, and that’s already really painful, but given what had happened the night before, it just hurt a lot more,” Pena said.

Immediately after the Pub incident, Venegas and her HACER co-president Laura Vargas contacted Duno-Gottberg, a Baker College magister, asking if he would open his house for Rice’s Latinx community to meet, along with any other students who wished to join. On Sunday night, students discussed the incident and the steps being taken to address it. According to Duno-Gottberg, the house was full for the event.

“I think it was a fruitful discussion,” Vargas, a Sid Richardson College senior, said. “A lot of students were able to go and speak about their feelings, maybe people who hadn’t unpacked it yet.”

Lago and Duno-Gottberg both said they thought the students wore the ICE costumes out of ignorance.

“I think there’s a lack of education, for sure,” Duno-Gottberg said. “I think if our students, and these students in particular, were to understand the role of Latinos in this country … there would be more respect … because that gesture is deeply ignorant.”

Others, however, didn’t believe the action could have been born out of ignorance; instead, many said they thought it was intentional.

“[I] don’t buy that they didn’t understand the ramifications. We are in such a tense political climate. I think there’s no way you would be surprised by going out in an ICE costume and people reacting with fear and shock,” Vargas said. “And if, somehow, they actually thought this wouldn’t be bad, the second students started approaching them, they would’ve been like, ‘Oh, okay, I didn’t realize that, I’ll take it off immediately.’”

Carter, expressed a similar frustration with the students’ specific choice of costume.

“They had a million and one things that they could’ve been for Halloween,” Carter said. “Why do you want to be someone or something that directly is linked to the oppression of people that we have on campus?”

Despite the McMurtry students’ actions, Duno-Gottberg said he wants them to have a chance to grow and learn from their mistakes.

“I don’t want these people to be ‘canceled,’” Duno-Gottberg said. “I think they should be made to engage their actions and engage [with] the larger problem of immigration.”

At time of publication, the three students in question did not respond to a request for comment.