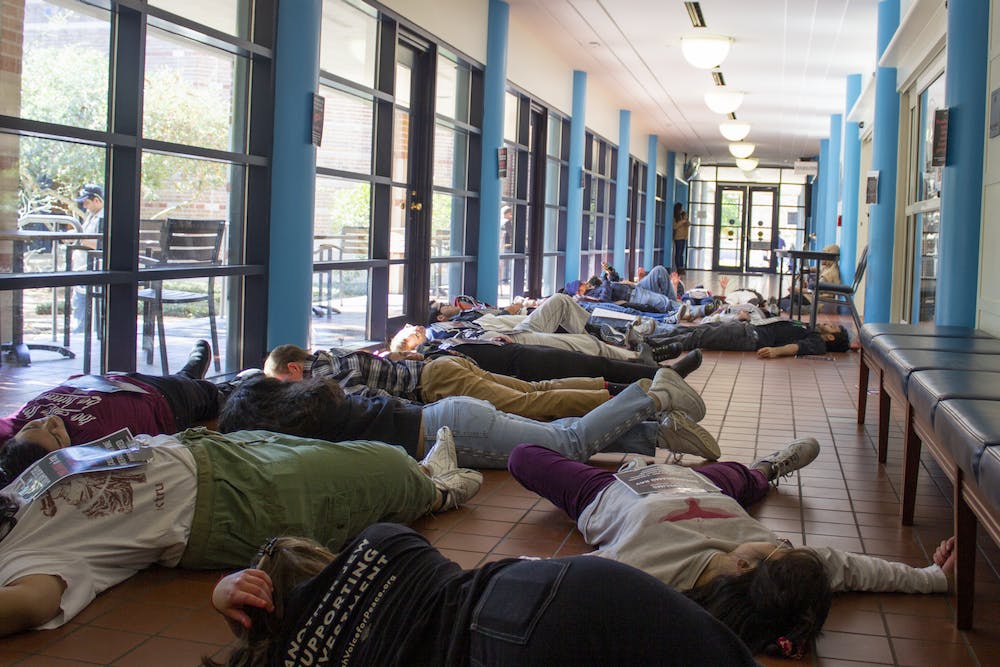 About 20 students participated in protests organized by Rice Left Friday morning in response to Secretary of State Mike Pompeo’s visit to the Baker Institute for Public Policy.

The organizers of the die-in also cited the new five-year, $30 million cooperative agreement between Rice University and the U.S. Army as an aim of their protest.

After dipping their hands in a mix of water and red food coloring, protesters taped flyers to Coffeehouse doors and laid down on the floor in front of Coffeehouse at 10:50 a.m as a die-in protest. At 11:08 a.m., an officer from the Rice University Police Department arrived on the scene, approached a protester and told them that the protest was not registered and was causing a blockage in the hallway. When he said that the protesters needed to leave, they did not respond. The RUPD officer walked toward the Information Desk but did not leave the RMC.

According to Rice University Policy 820 titled “Campus Demonstrations, Protests, and Organized Expressions of Opinion,” activities such as protesting and installing posters are allowed as long as they do not violate local, state or federal laws.

RUPD Chief of Police James Tate said the officer arrived at the scene of the protest following a complaint they received.

“Someone actually complained to us and said, ‘Hey, is this allowed? Do we really have to accept this?’” Tate said. “And no, we don’t. So that’s when our officers asked the kids to get up and they moved — no issues at all. And what I’m looking at here [at the Baker Institute], this is very peaceful.”

At 11:10 a.m., one of the organizers for the protest announced that the die-in was over. The protesters headed back to the Multicultural Center together, where they departed at 11:25 a.m. to head to the Baker Institute.

According to McMurtry College junior Arija Forsyth, Rice Left produced flyers regarding  Pompeo’s foreign policy and civilian deaths in countries with U.S. military intervention before the protest. The flyers had been stamped for approval by the Info Desk and posted to the RMC bulletin board, but taken down within thirty minutes of being posted, according to Forsyth.

Hania Nagy, a Martel College senior, said she felt like the protesters were being babysat by RUPD, and that demonstrations should take place in populated areas where they can be seen.

“Isn’t the point of a protest being disruptive and jarring people enough to make them walk out of their daily bubble?” Nagy said. “How are you supposed to do that if they put you in a bubble that’s separate from the fucking islamophobic and violent imperialist bubble [where Pompeo is]? It needs to be in the same space.”

Hannah Meeks, a Hanszen College junior, said the protest was civil and nonviolent.

“I think the concept of having to register protests is silly because then it no longer becomes a protest, it becomes a sanctioned gathering,” Meeks said.

Soon after, RUPD officers told the students that as long as they stayed on the Central Quad side of the street, they were “good to go.”

At 11:37 a.m., President David Leebron exited the Baker Institute and walked toward the students after they called out to him. The students handed Leebron copies of the flyers Rice Left produced regarding Pompeo’s foreign policy and civilian deaths in countries with U.S. military intervention.

At the scene, Leebron said that students are entitled to voice their opinions, but that the locations of protests taking place need to be discussed beforehand with the Secret Service and others when prominent political figures visit campus.

“We do want to make sure that the rules are an appropriate accommodation between safety and the freedom of speech on campus,” Leebron said.

Drew Carter, a Jones College sophomore at the protest, said that Pompeo’s position as Secretary of State does not necessarily qualify him for the speaking engagement.

“I think the most important takeaway is that there are a good number of students who refuse to turn a blind eye to injustice whether it’s domestic or abroad,” Carter said. “We shouldn’t be bringing bigoted speakers to campus in the name of solely respecting the office they’re in if they don’t deserve it.”