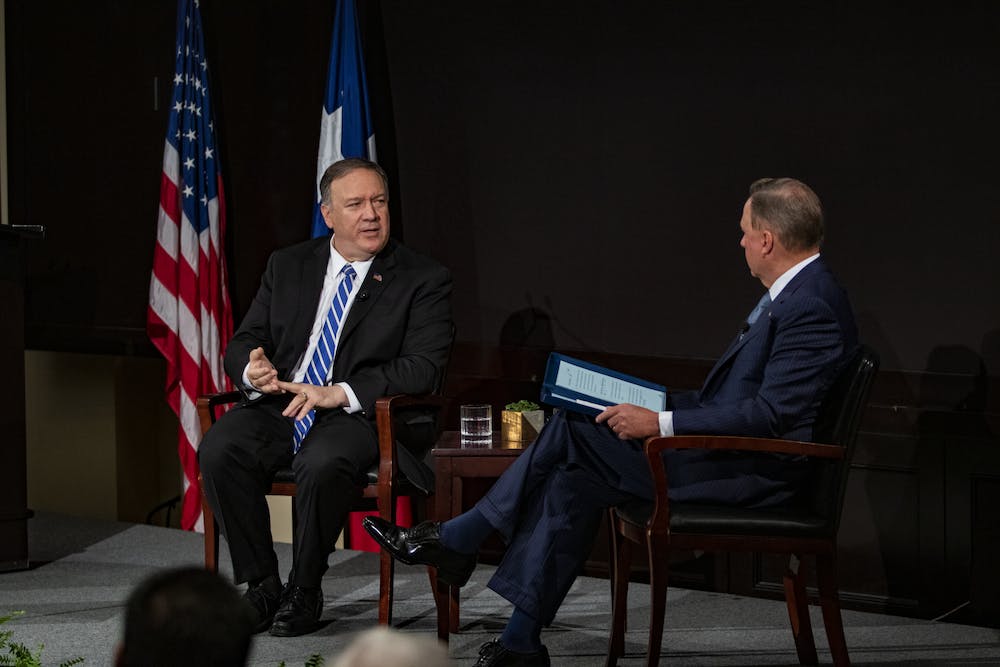 Secretary of State Mike Pompeo spoke about the “natural hunger for human freedom,” criticized the Communist Party of China and fielded questions regarding U.S. foreign policy in countries such as Syria and Mexico as part of his Friday visit to the Baker Institute for Public Policy. Outside the event and in the Rice Memorial Center, students staged demonstrations in response to his visit.

Pompeo previously served as the director of the Central Intelligence Agency from January 2017 to April 2018. More than 300 people attended the event, including a handful of undergraduate students, some of whom raised concerns about the exclusivity of the event.

James A. Baker III, the honorary chair of the institute that bears his name, introduced Pompeo. Baker, who served as the 61st secretary of state under President George H.W. Bush, noted the dramatic nature of current U.S. foreign policy.

“As someone honored to serve as secretary of state, I fully understand the sometimes agonizing difficulty of prioritizing U.S. interests and values in a geopolitical setting where the United States possesses immense but still limited power,” Baker said.

Pompeo opened his brief 15-minute remarks by describing his visit as a “quid pro quo” arrangement with Baker, a reference to the language currently being used on Capitol Hill in the ongoing impeachment proceedings. Besides his “quid pro quo” comment, Pompeo did not directly address the proceedings. Pompeo said he invited Baker to visit him at the CIA headquarters upon being appointed as secretary of state, a visit Pompeo said has greatly helped him in his role.

“[Baker] said ‘Here’s the deal, you have got to come to the Baker Institute’ and I’m now upholding my end of the quid pro quo,” Pompeo jokingly said, eliciting laughter from the audience. “You’ve got to have fun along the way.”

Pompeo’s speech highlighted the “natural hunger for human freedom” and recounted the fall of the Berlin Wall, a segment of which currently stands outside the Baker Institute. Pompeo remarked that America has a responsibility to assist all those around the world seeking human freedom.

Jefferson Ren, a Jones College junior in attendance, said that he was invited directly by the Baker Institute, since he works there as a research assistant.

“I thought that the speech was generally structured to be inoffensive as Pompeo gave broad platitudes about how the U.S. stands for democracy and freedom,” Ren said.

Pompeo spoke at length about his trip to Germany last week to honor the 30th anniversary of the fall of the Berlin Wall in 1989, during which Pompeo was serving as an Army lieutenant on a tank unit in Germany and Baker was the sitting secretary of state. While Pompeo left Germany a month prior to the fall of the Berlin Wall, he had been patrolling part of the border between East and West Germany.

“The wall came down and everyone moved towards freedom, but of course, we had to work for it,” Pompeo said. “It took decades of effort across multiple administrations and with the help of the allies and the people of East Germany, we rid the world of the Soviet scourge. No one should ever underestimate Secretary Baker’s individual contribution to taking down that wall.”

Following the speech, Pompeo took part in a Q&A session moderated by Warren Tichenor, former U.S. ambassador to the United Nations, who asked Pompeo a set of questions including those submitted by the audience. The questions spanned U.S. foreign policy across five continents, with topics ranging from America’s role in the North Atlantic Treaty Organization to U.S.-Mexico relations. Ren said that many students, including himself, wished there was time for more questions.

Despite Pompeo’s relevance in the ongoing impeachment proceedings, Tichenor did not ask any questions about either the proceedings or former U.S. Ambassador to Ukraine Marie Yovanovitch, who was coincidentally testifying before the House Intelligence Committee that same morning. Pompeo has been sharply criticized for failing to support Yovanovitch, who was abruptly fired by President Donald Trump earlier this year as part of an alleged smear-campaign.

Rice Young Democrats President Maddy Scannell, who was in attendance, said she had submitted a question about the impeachment proceedings, specifically about the nature of Pompeo’s instructions to Gordon Sondland regarding Ukraine policy. Sondland, the U.S. ambassador to the European Union, has lately become embroiled in the impeachment proceedings after being named in the whistleblower complaint on the Trump-Ukraine scandal.

Scannell said she was directly asked by the Baker Institute to submit questions for Pompeo and said she was disappointed that her question on Ukraine was not asked and that the impeachment proceedings were not discussed beyond Pompeo’s comment.

“Pompeo's implication in the impeachment inquiry, whether or not you think it’s meritorious, should have been taken more seriously by both the Baker Institute and the secretary himself,” Scannell said. “Friday's event demonstrated that the Baker Institute seems to prefer bringing big names to campus to satisfy donors, rather than critically engaging powerful people and holding them accountable for their actions.”

Pompeo had strong words for the Communist Party of China, specifically with regard to what he saw as General Secretary Xi Jinping’s failure to uphold the “one country, two systems” principle in Hong Kong. Pompeo took issue with many recent actions by the People’s Republic of China, including the handling of the Hong Kong protests and the militarization of the South China Sea. Pompeo said that the U.S. may soon be taking a harder approach toward China if their behavior remains consistent.

“For an awfully long time, America has not done enough [about China],” Pompeo said. “We’ve said repeatedly to General Secretary Xi, ‘Honor that commitment you promised there would be one country, two systems.’”

The Q&A shifted to the events of the Middle East. Pompeo defended the Trump administration’s decision to withdraw troops from Northern Syria as well as the administration’s support for Israel’s annexation of the Golan Heights, a major event in the Israel-Palestinian conflict.

“America should be proud of what we achieved [in Syria],” Pompeo said, in reference to the fight against ISIS. “We still have significant forces in Syria.”

Students have expressed concerns regarding the exclusive nature of Pompeo’s speech, as well as that of other recent high-profile speaker events at the Baker Institute.

According to Scannell, only a few students, all of whom are part of the Baker Institute Student Forum, were initially invited to attend the event. Scannell said she conveyed her concerns to Vice President for Administration Kevin Kirby, who reached out to the Baker Institute to advocate on her behalf and secure tickets for more students, including Baker Institute interns and student leaders of political organizations.

“We request that you advocate on our behalf to make tickets available to the Rice University student body through a ticket lottery or other means,” Scannell wrote in her email to Kirby. “When powerful people visit campus, we feel that the average student should be able to listen and engage them directly without having to purchase $1,250 of access through the Baker Institute.”

Scannell, a Martel College junior, said that Rice Young Democrats officers are meeting with Ben Stevenson, the Baker Institute’s director of operations and planning, in the upcoming week to ensure future events are accessible to students.

Stevenson said that the Baker Institute has held events open to a greater number of students in the past, and cited former Vice President Joe Biden’s talk in September 2016, which 3,500 students, faculty and staff attended in Tudor Fieldhouse. Stevenson said that certain events have space constraints, limiting the number of students that can attend.

“Decisions about event location and audience capacity are determined by anticipated interest, venue availability and logistical costs,” Stevenson said. “For all public events, the Baker Institute works to ensure that the Rice campus community, including students, is represented. In certain cases, due to space constraints, invitations to the Rice community are limited to university leadership and undergraduate and graduate students affiliated with the institute and its research programs.”

Rice College Republicans Chairman Anthony Saliba said he was satisfied with the number of undergraduate students who were ultimately able to attend the event.

“I thought the secretary of state's speech was an enjoyable and informative experience, and I am thankful I had the opportunity to attend,” Saliba, a Duncan College junior, said.