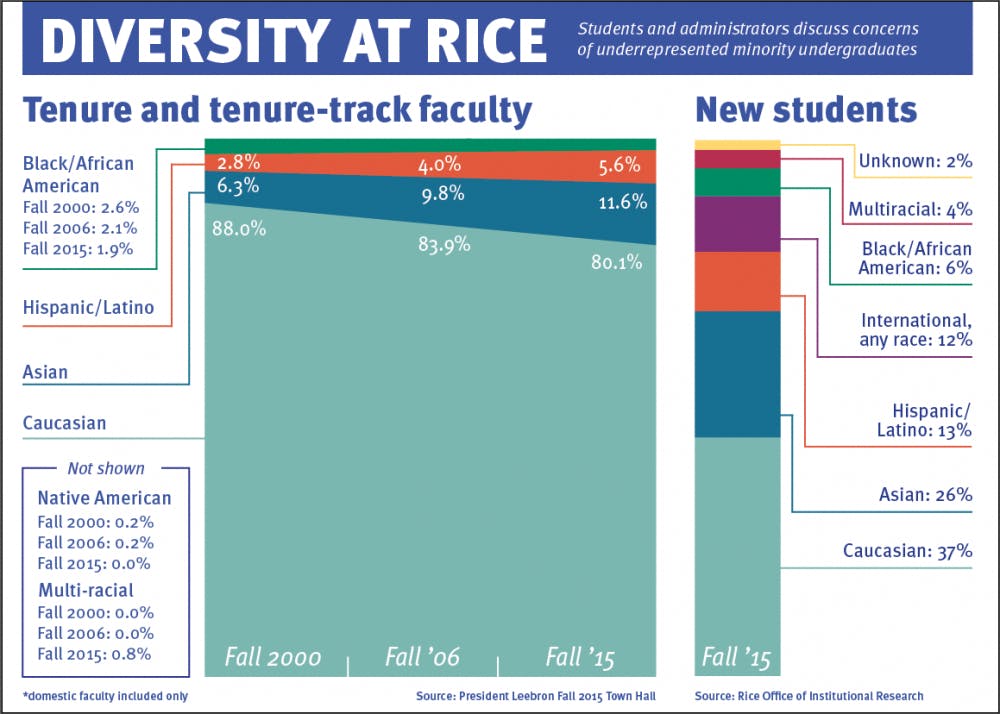 A coalition of students called the Students of Color Collective has been collaborating with administration to improve underrepresented minority students’ experiences.

The Collective is comprised of members of the Black Student Association and the Hispanic Association for Cultural Enrichment at Rice. They are working on long-term initiatives including creating a multicultural student center, increasing faculty and undergraduate student diversity, clarifying Rice’s policy toward undocumented students and potentially introducing a black studies major.

Baker College senior Gaby Barrios, a member of the Collective, said the group hoped to ensure that minority students, whose experiences are often different from the majority, are better included in Rice’s vision for students.

“There is a stress on progress at this university, Barrios said. “That progress can look like advances in STEM [or] entrepreneurship, but we wanted to also be included in those kinds of conversations,” Barrios said.

The Collective has launched initiatives to examine Rice’s financial aid package and increase the percentage of underrepresented minority undergraduates.

Additionally, due to the work of the group, several questions regarding diversity and Rice’s climate were included in the Survey of All Students and the Senior Exit Survey.

Wiess College senior Blaque Robinson, who conceived the idea for the Collective, said she began to question the campus environment for black students in the wake of student protests at the University of Missouri and Yale University in the fall semester.

“Through research and involvement in the black community I have heard a myriad of disheartening stories about the experiences of black students on Rice campus,” Robinson said.

Price, a McMurtry College senior, encouraged all black students to attend a meeting in November to discuss their experiences and ideas for  administrative measures to address them. Hutchinson and Clack attended the meeting to listen to concerns but did not speak, according to Robinson.

“I wanted us to improve so students could see the benefits of a flourishing student body from a more inclusive environment,” Price said. “Make no mistake, this process scared me. I wondered what people would think, if I would make things worse, and if I was making the right choices.”

Instead of holding a general meeting, Barrios said HACER gathered over 100 responses about students’ experiences through a survey.

“BSA members had already been thinking about this in a complex way, and were ready to speak about it on a greater platform, given the vocabulary from conversations happening nationwide,” Barrios said. “Our [Latino] population is a little more reticent; we have less precedence in talking about what it means to be a Latino or a Latina in a higher education space.”

According to Barrios, responses ranged from students who said they felt completely welcome at Rice to those that said they did not feel comfortable because of their ethnicity.

“If there is a population that’s dissatisfied, we need to do something,” Barrios said. “Yes, there are people who are satisfied and more reticent to talk to administration, [and] we’re so happy that they’re satisfied, but we also feel like not everything is the way it could be ideally.”

Hutchinson, Provost Marie Lynn Miranda and President David Leebron are involved with the initiatives, among other administrators. According to Barrios, working with faculty and administration has been collaborative.

“All of the administrators we have spoken with have been extremely receptive, extremely prompt in responding and have definitely listened to our concerns and agree that it is time to make a change,” Barrios said.

On Feb. 15, the Collective presented a proposal to Leebron and Miranda regarding their initiatives. Robinson said subsequent meetings with the administration struck a different tone than the student protests that have occurred at many other universities, where animosity has divided students and administration.

“We’re trying to work with administration without putting them on blast,” Robinson said. “We want to hold them accountable, but in a different way than has been done before.”

Leebron said many of the Collective’s aims reflected concerns that had been expressed previously by administration and faculty.

Leebron said Rice has made some progress by increasing the number of matched QuestBridge scholars and expanding the number of African-American matriculants from an average of 40 per year to 65 per year in the span of 15 years. However, he said there is still work to be done.

Miranda said a group comprised of the academic school, dubbed the Deans Council, has worked over the past year to specifically address key issues including faculty diversity. According to Miranda, over the past 10 years, for example, the number and percentage of black faculty members has decreased.

“A diverse faculty is a goal broadly embraced across campus,” Miranda said. “The best faculty and students tend to want to be at a place that’s diverse, regardless of their own background.”

Miranda added that faculty diversity would not be achieved overnight.

“If you want to work on faculty diversity, you’re in it for the long haul,” Miranda said.

Sid Richardson College senior Katherine McElroy, a member of the Collective who is working on Orientation Week concerns and the group’s website, agreed that diversity is not just a matter of achieving target numbers.

“Our goal is not quantitative, but qualitative,” McElroy said. “Our main concern is the culture on campus, and it doesn’t matter how many people we accept or offer tenure tracks. If they don’t have a physical and visible presence in the Rice culture, then our work is all for naught.”

Miranda said the Collective also placed a renewed emphasis on issues that have not yet been addressed, such as unclear financial aid and admissions policies for undocumented immigrant students. Leebron has designated a working group to clarify these policies.

“The administration knew they had undocumented students, but it was helpful for students to shine the spotlight on the issue,” Miranda said.

A multicultural center is on the list of priorities for an RMC renovation, according to both Miranda and Leebron. Leebron said while this would represent a significant expenditure, he is receptive to the idea.

According to Miranda, a new program of study may be introduced, though it remains to be seen whether there is enough interest from faculty and students. While several students have dubbed this a “black studies major,” Miranda said she was hesitant to give it a name at this point, since planning has not yet begun.

“One of the questions is, is it a black studies major?” Miranda said. “Is it a cultural studies major? Would it be a program in inequality?”

While exact details of the initiative are still in the works, Miranda said the administration is impressed by the Collective’s efforts so far.

“Since I started, I’ve been so impressed with the thoughtful, collaborative engagement that the students here bring to everything,” Miranda said.

Duncan College sophomore Juan Valenzuela and Hanszen College freshman Sydney Knight are also members of the Collective. It was no mistake that the efforts of the Collective were not released publicly, according to Valenzuela, Knight and McElroy. They said the Collective’s discretion was in the best interest of the student body.

“We are using discretion to the advantage of our constituents,” the three said. “We are not looking for recognition for our efforts but for a better culture for our friends. We have the information we need from the people who wanted to be heard, so we don’t see the merit in disclosing everything.”

Leebron said because the initiatives were still a work in progress, discretion prevented the spread of misinformation across campus.

“We hoped when everything became more public, it would be accurately public,” Leebron said.

Barrios said the Collective is exercising caution, but she is pleased with the progress the group has made.

“We’re being very cautious because we don’t want anything to be misconstrued, and we’re very happy with the way things are going so far,” Barrios said. This is an ongoing conversation.”

Leebron said the conversations with the Collective reflected Rice’s strong sense of community.

“[The conversations] evolved in a way consistent with a culture of care and respect, the assumption that people are in these processes with goodwill,” he said.