‘Much Ado’ brings a classic with a Western twist 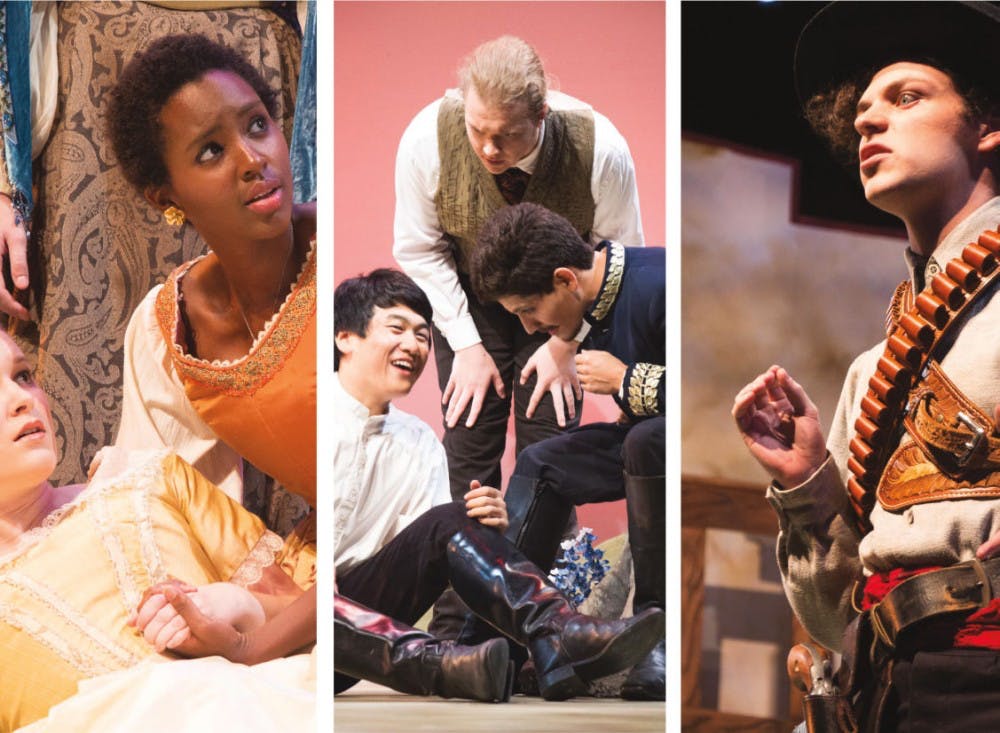 Modern adaptations of Shakespeare face many hurdles on the road to success. When directors try to update or adapt the play in some way, so as to make it more approachable, they risk doing more to harm the message of the play than to help it. Too much consideration for contemporary humor and fashion can cheapen or distract from a play’s intended effect. In the Rice Theatre Program’s production of “Much Ado About Nothing,” director Amelia Fischer skillfully navigated this pitfall by retaining the original script and simply shifting the setting to the more familiar 19th-century Texan countryside. The result is a thoroughly enjoyable version of the play that allows the audience to appreciate the literary aesthetic of each Shakespearean turn of phrase, while also breathing new emotional and comedic life into the script.

“Much Ado About Nothing” features two couples: the witty and combative Benedick and Beatrice, played by Jones College sophomore Justin Bernard and Hanszen College junior Rachel Buissereth, and the more emotional and lovestruck Claudio and Hero, played by Martel College freshman Alan Kim and Sid Richardson College freshman Abby Sledge. The main action in “Much Ado About Nothing” revolves around Claudio’s love for Hero, but the play is much more an ensemble piece than it is a story of two lovers. Indeed, the play would be nothing if not for the plotting of Don Pedro, played by McMurtry College senior Juan Sebastian Cruz, the scheming of his brother Don John, played by Brown College senior Chris Sanders, and the stubbornness of Benedick and Beatrice. As with many Shakespeare plays, “Much Ado About Nothing” relies heavily on secret plots and mistaken identities, and has enough twists and reversals of fortune to keep any audience member’s interest in the fast-paced plot.

“Much Ado About Nothing” contains superb acting across the board. Even minor characters, such as Hero’s handmaid, Margaret, played by Baker College freshman Sriparna Sen, deliver their lines with conviction, move around the set with purpose and hit each comedic beat with impeccable timing. Cruz, in the role of Don Pedro, is a singular standout in this aspect, as he recites even the most obscure and inscrutable of his lines with an ease and depth of understanding that makes the difficult 16th-century English seem perfectly natural. Bernard is another notable presence on the stage, as his larger-than-life physicality and sardonic line reading fit his character, Benedick, perfectly. Finally, I would be remiss if I didn’t mention Jones College senior Qingyang Peng’s hilarious rendition of Dogberry, the incompetent constable of the story, whose malapropisms and over-the-top bravado had me tearing up with laughter. “Much Ado About Nothing” is a relatively dialogue-heavy play, and the whole cast did a fantastic job handling the hefty script.

In fact, for a play that is mainly dialogue-driven, the physical direction is amazing. All actors make full use of the stage, and the more over-the-top characters such as Benedick and Dogberry move around with a manic intensity that corresponds perfectly to their words. Nowhere is this physical presence put on display more than during the scenes where Benedick and Beatrice overhear others talking about them. The sheer hilarity of their physical comedy would border on upstaging if it were not executed so skillfully, and it is worth seeing the play just to witness these two excellent models of physical acting.

Since the Rice Theatre Program’s production made few, if any, changes to the script of “Much Ado About Nothing,” the setting change is entirely conveyed through costuming and set design. There are no set changes in the course of the play, but it is clear that the crew spent a lot of time and energy perfecting the single hacienda that takes up half of the stage. In fact, the proportion of stage given to set is perfectly calculated; the design works both as the adobe estate comprising Hero’s home and the open expanse that is the Texas countryside. Actors are able to shift their positions and attention between the contexts, so the set never feels too small or underutilized. Lighting changes also help set the mood, communicating the passage of time in a subtle gradient reminiscent of a setting sun. The costumes are also quite faithful to the setting, and help to communicate allegiances relevant to the plot.

In short, the Rice Theatre Program’s rendition of “Much Ado About Nothing” is everything one could want from a Shakespeare play, masterfully interpreted with an appropriately light touch. Every scene had the whole audience laughing uproariously, as befits a comedic play by the master of theater. Go see it and experience the joy that comes from a classic play done perfectly.