All the News That's Fit to Print

By Maddy Adams and Jessica Kelly

Many Rice traditions are either suited or unsuited for the camera, depending on your personal taste. 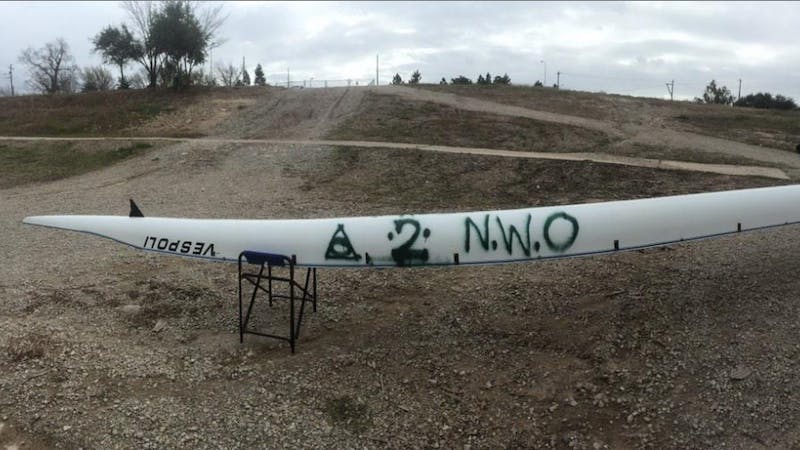 This winter break, burglars broke into the Rice Crew team’s boathouse, tagging their boat with graffiti and stealing solar light panels. The vandalism and theft occurred some time between Dec. 24 and Dec. 26. The boathouse is located in the Buffalo Bayou/East End area, a location known for its graffiti culture. This incident of graffiti and theft marks the fourth burglary of the team’s first semester on the Bayou.Coach Mike Matson told ABC13 that professional paint repair costs for the tagged boat could be anywhere from $1,000 to $1,500.The team looks forward to the completion of their new permanent structure, which will have high-tech security features. In the meantime, the team is seeking assistance from the local Houston Police Department, along with support from other rowing teams in the Houston area and the Rice community. Vespoli, manufacturer of the team’s tagged boat, has reached out to the team as well.“It sure is sad that these people are that desperate to be breaking into our boathouse to try to steal what few things we have and even go so far as to vandalize our boats,” Laura Nicholson, a McMurtry College freshman, said. “But in the words of our coaches Mike and David, Rice Crew will continue to push [forward] and rise and rise again through these challenges.”Coach Mike Matson has been a strong voice of support for the team, addressing this issue while keeping the team focused on the future championships. Matson said the burglary will not affect the team’s performance.“This was an unfortunate occurrence, but certainly not a setback,” Matson said. “We learned from the experience and have properly adapted our security working in conjunction with the police. Our focus now shifts to the championship season ahead and sending Rice’s first boat to the SIRA championships in over a decade to proudly represent the Owls.”The team is set to meet with the East End Graffiti Abatement team on Friday to remove the graffiti from their boat. 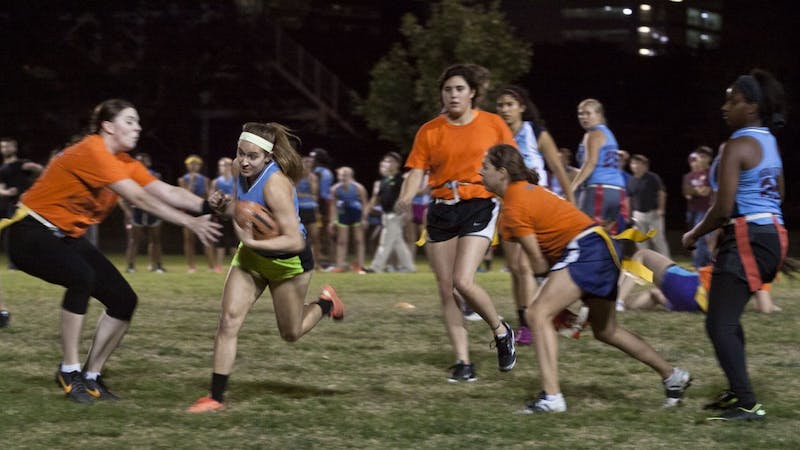 With the seventh week of preliminary powderpuff games still underway, Sid Richardson College currently sits at the top of its division and the overall conference with a 78-point differential and six wins and no losses. Last year, the team ended their season with a 62 point differential and six wins and one loss. According to Sid Richardson junior Christina Shields, the secret to the team’s success is an improvement on the offensive side of the ball.“Our defense has been really strong for the past few years, but this year we really diversified our offense as well,” Shields said. “Our defense is still rock solid, but now everyone on offense is scoring, and I think that’s the reason we’ve seen such a good point differential.”Martel College trails behind Sid Richardson and GSA as third overall, with a current record of four wins, one loss and a 18-point differential. Last year, Martel ended their season with three wins and four losses, finishing with an 11-point differential. This year, the Martel and GSA are tied for the best record in the North division, although GSA has the better point differential with 28.Head Coach and Martel senior Taylor Neal said he is enthusiastic about his team’s improvement.“Our team has improved on both sides of the ball, and it has been exciting to get a few wins to start the season,” Neal said. “We are not satisfied with a few early wins, and we’re still trying new things as we attempt to improve.”Martel junior Cassie Peretore said Martel’s newfound success can be explained by the team’s effort and chemistry.“Our coaches and players this year have really stepped it up with dedication and hard work,” Peretore said. “I’m really excited to see where our season ends up. Honestly, we’re just going out there, having fun and enjoying ourselves.”Will Rice College opened with a loss by one point to Martel. However, they were quick to stabilize their point differential with three consecutive victories against Brown College, Baker College and Hanszen College. The team recently lost to Sid Richardson by seven points.Coach Will Byers said he is proud of the determination and work ethic of the team, giving special credit to senior Ellen Wendte and junior Michelle Huang.“We’ve had two tough losses that really came down to the wire,” Byers said. “I’ve been extremely impressed with our girls’ resilience and focus. Captains Ellen Wendte and Michelle Huang have done a great job of getting people out to practice and motivating everyone to excel. I think future seasons are looking bright for Will Rice.”Coming off of its 2013 season, which finished with a loss in the championship game, the McMurtry College team has seen less success this season with two wins, three losses and a two-point differential. According to Head Coach Ross Michie-Derrick, a McMurtry senior, the team has had to rebuild itself after losing many key players to graduation.“Veterans like Jessica Kelly, Andrea ‘AK-47’ Kopczynski, Joanna Hall and Allison Yu have played well from the start,” Michie-Derrick said. “The freshmen have found their lane in the past few games, [and quarterback] Avery Landrum has amazing spatial awareness, which has facilitated her rapid rise.”Despite the initial setbacks, Michie-Derrick said the team will end up winning the championship. “We started the season in a rebuild, but we will finish it with the championship plaque,” Michie-Derrick said.