Although they headed into the tournament hot, winning four of their last five games, the season ended for the Rice women's basketball team in disappointment Wednesday night, as the Owls fell to the University of Tulsa in the first round of the Conference USA tournament in Tulsa, Oklahoma.For a team with such high expectations heading into the season, the loss was a setback. While many players from this season will be returning next year, they will be thinking this off-season about what exactly went wrong this  year.The Owls, in their final regular season game of the year, upset Southern Methodist University at Tudor Fieldhouse.SMU jumped out to an early lead, heading into halftime up four points. Rice shot poorly and had trouble getting second opportunities, resulting in only 20 points the entire first half - one of their lowest totals on the seasonIn the second half, Rice got red-hot shooting the basketball, finding points on every corner of the floor. They jumped out to a huge lead on SMU - up to 18 points at one juncture. The 38 points they scored in the second almost doubled their first half total. Rice ended up winning the game 58-46.Junior Jessica Kuster had another huge game for the Owls, hauling down an impressive 18 rebounds along with 15 points. Sophomore Nakachi Maduka led the Owls with 16 points."[Our team put forth] tremendous effort defensively," Head Coach Greg Williams said. "Hopefully this will give us positive momentum going into the conference tournament."However, the Owls have struggled to play two complete halves all year, and in the first C-USA game against Tulsa, they could not buck this trend. The Owls trailed by up to ten in the first half, but closed the gap to two going into halftime. In the second half Tulsa shut the door in the second twenty minutes, holding Rice to only 24 points while putting 44 up themselves. Rice committed 17 fouls in the second half, making a win even more unlikely. By the end of the game, Tulsa cruised to a seemingly easy 74-52 victory.Kuster had 15 points, but only 7 rebounds. Senior Jessica Goswitz had two assists in her final night as an Owl, while Senior Zoe Rogers contributed 3 points in her last game."I give credit to Tulsa. They played very hard, very aggressively," Williams said after the game. "We were the second leading rebounding team in C-USA this year, and we got outrebounded 44-23, so that was a huge factor in the game. We haven't been outrebounded like that all year long."Kuster knows that her team will make progress in the off-season."For myself, I have a lot of little things I want to work on," Kuster said. "For my team, I don't know, everybody is just so young. It's good that we're going to have more experience next year. We have people that can shoot; we just need them to be more confident."

If there is a time to get hot in college basketball, it is March. The women's basketball team has won three out of its last four games and is now looking like the team that was picked to finish in the top half of the conference.

Things are quickly deteriorating for the Rice women's basketball team, and it only has five games left this year to fix the season. After losing two more games this past weekend, the Owls find themselves tied for last in Conference USA, far from where they were originally predicted to finish this year. It may take a massive run in the C-USA tournament for this to be anything but a forgettable season.

Women's basketball is edged out by Houston

With only one game this weekend, the Rice Owls had a lot of time to prepare for the arrival of the University of Houston Cougars to Tudor Fieldhouse this past Sunday.  Coming off their first win in quite a while, the Owls were hoping to use their victory against the University of Alabama, Birmingham, as a stepping stone to leave the basement of the conference standings.  Unfortunately, the Cougars had other plans.

The Rice Owls women's basketball team drew a line in the sand. This Rice team is just too talented to lose six in a row, and the team must have realized that heading into a big weekend of games.Another two losses would have buried the Owls firmly at the bottom of Conference USA, down to a point where recovery is unlikely in the conference standings with only eight games left to play. While a split this weekend did not vault the team into the upper echelon of C-USA, it gives the team momentum to possibly pull off a streak of wins and position itself for a decent seed at the C-USA tournament in Tulsa, Okla.The first game this weekend, against a middle-of-the-pack University of Memphis team on the road, did not provide the Owls the win they wanted but proved the team can compete away from Tudor Fieldhouse. The Owls' last four road games had all been substantial blowout losses.Typical of the Rice team, it fell down badly in the first half, going down 29-14 at one point. It managed to close the lead to 10, heading into the break down 33-23.After playing well the first few minutes, Rice managed to close the gap to only a few possessions. It started hitting the 3-ball with some consistency, much better than the 10 percent from behind the arc it shot in the first half.Rice got within three but could not get that one big turnover, eventually losing the game 64-60. Head Coach Greg Williams said he was pleased with the effort."I thought that this was our best consistent road game, to battle back from down 10 at the half to get within three twice," Williams said. "Jessica Kuster had a really strong game as we tried to get her some looks in the second half."Forward junior Kuster had 22 points for Rice, her sixth 20-point game of the season.The next Sunday, the Owls welcomed the University of Alabama, Birmingham to Tudor Fieldhouse, looking for a much-needed victory after five straight losses.The Owls got off to a fast start, going up 11-2 in the first three minutes. A halftime score of 30-21 gave the Owls confidence heading into the half.The Owls traveled to the line an impressive 17 times during the first half, with great ball movement to the inside of the post.The Owls held off their opponent for the entire second half at home, never letting UAB back into the game until the closing seconds. The 61-53 final's eight-point difference makes the game out to be closer than it really was.Kuster had another double-double, her 11th this season, scoring 18 points and pulling down 14 rebounds in the win. She went an impressive eight for 10 from the free-throw line. Senior guard Jessica Goswitz also contributed eight points in the win.The next game is a big one for the Owls, who will take on city rival University of Houston at Tudor. Houston's team, which has struggled in the conference, is a very winnable game for the Owls and an important potential later tiebreaker for postseason seeding.The Owls then travel to New Orleans, La., to take on Tulane University, which the Owls barely lost to earlier in the season at home by a score of 69-65. 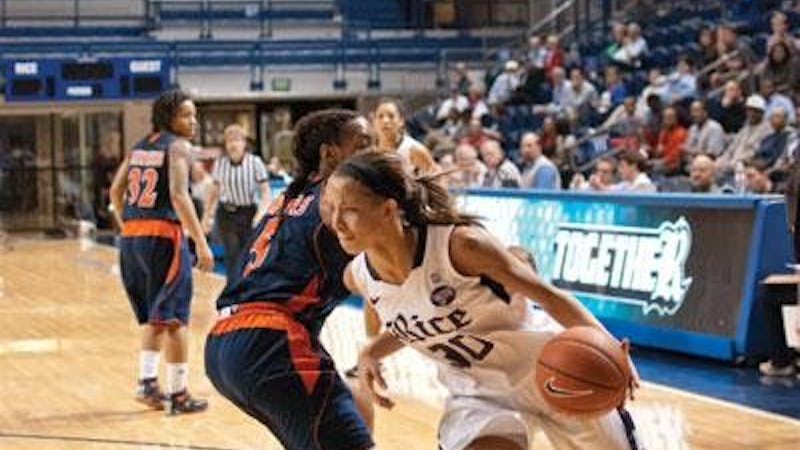 It was another rough weekend for the Rice Owls women's basketball team, which lost both games it played to fall to four straight losses. The Owls, whose conference record of 1-5 places them at No. 11 in Conference USA, are consistently struggling to score points.

Women's basketball gears up for rivarly game against UTEP

Since the Owls first received their Conference USA schedule, this past week has been circled as one they knew was going to be difficult. Tulane University, currently in third place in the conference, visited Tudor Fieldhouse, followed by a road trip to Dallas to take on conference leader Southern Methodist University. Both teams had more than 10 victories already this season.

Things were merrier in 2012 for the Rice women's basketball team than in 2013 so far. After a long Winter Break home stand, the Owls lost their first game of the new year to 37th ESPN ranked Texas A&M University team, ending a five-game winning streak. The team then opened Conference USA play with a fall to Eastern Carolina University before rebounding with a victory against a bottom-of-the pack University of Tulsa team.

The Owls triumph over the Falcons

For only the second time in 50 years, the Rice Owls football team has a bowl victory to celebrate. After winning five of their last six games to be eligible for the postseason, the Owls beat the Air Force Academy in the Bell Helicopter Armed Forces Bowl by a final score of 33-14, providing the program an opportunity to be proud.

Two games under .500, with two games left; logic says both games are must-wins for the Rice Owls, who have set their sights on bowl eligibility. For the first time since 2008, there is a real possibility of Rice playing itself into a December game.