After a dominating victory over Florida International University on Saturday afternoon, Rice head coach Mike Rhoades marched off the court and waved a gracious “Thank you” to the student section like he does after every home game this year.

In front of a wild home crowd — along with Houston Rockets superstar James Harden in attendance — the Rice University men’s basketball team closed the game on a 21-3 run to overcome a 13-point second half deficit and win 83-73 over Western Kentucky University on Thursday night at Tudor Fieldhouse. 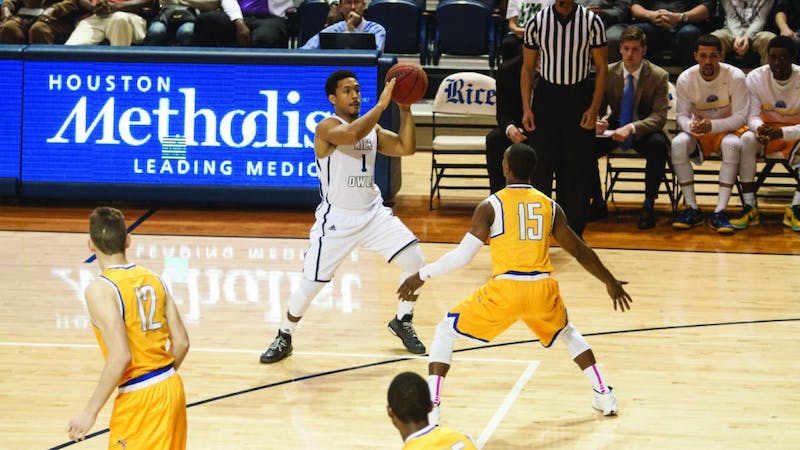 Scoring their most points since 2011, the Rice University men’s basketball team handily defeated LeTourneau University to cruise to a 102-78 preseason win. Rice had five players score in double figures, with freshman guard Marcus Evans leading the way with a game-high 24 points on nine-of-11 shooting. Evans also notched five rebounds and four assists. Sophomore swingman Egor Koulechov recorded a double-double, with 23 points and 10 boards, and freshman guard Connor Cashaw contributed 17 points. Sophomore guard Bishop Mency and freshman forward Marquez Letcher-Ellis each posted 11 points.LeTourneau was led by sophomore sharpshooter Alex Colhoff, who scored 23 points, which included seven 3-pointers, and pulled down 10 rebounds for a double-double. He was complemented by senior guard CJ Edwards, who had 16 points, and junior guard Jeff Martin, who had 11 points. From a statistical perspective, the Owls played efficiently, scoring 57.4 percent (35 of 61) of their field goals and 40.0 percent (10 of 25) from 3-point territory. The Yellow Jackets shot only 39 percent (28 of 71) from the field but scored a high 51.5 percent (17 of 33) from three. Rice also led LeTourneau in rebounds 45 to 30. According to Rice Head Coach Mike Rhoades, the team enjoyed finally playing a real game.“It was great to get out there and play somebody else, for the coaches as well as the players,” Rhoades said. “When you go as long as we did, from the first of October, you just want to play somebody else. Of course, when the bleachers are pulled out and the stands are full, it’s always fun.”The Owls took the lead early and never trailed throughout the game. Rice began with 13 straight points, holding LeTourneau scoreless until the fifth minute when Colhoff hit a three to give the Yellow Jackets their first points of the game. Rice then pushed to a 21-6 lead, but LeTourneau went for a 6-2 run to close the gap to 23-14. The Owls returned the favor with a 16-2 run for a convincing 39-16 lead and finished the half 53-27.After trading baskets in the first three minutes of the second half, Rice pushed ahead with a 7-0 run and never looked back. Although LeTourneau outscored Rice 51-49 in the second half, Rice led by as many as 32 and finished with a 102-78 victory. Rice now turns to their season opener against No. 14 University of California, Berkeley in Berkeley, CA on Friday, Nov. 13 at 10:30 p.m.

On Halloween afternoon, the Rice University volleyball team defeated the conference-leading No. 22 Western Kentucky University in a thrilling five-setter (25-23, 25-21, 22-25, 23-25, 16-14) at Tudor Fieldhouse, snapping Western Kentucky’s 17-match win streak and avenging Rice’s five-set loss to Western Kentucky last year in the Conference USA championship match. With the win, the Owls hand Western Kentucky their first C-USA loss of the season and improve to an 18-8 overall record and 8-4 in conference play, placing them third in the C-USA standings.According to Rice Head Coach Genny Volpe, the Owls performed and competed at a high level. “Today was fun,” Volpe said. ”Our team has been up and down all season, but it seems like when we play strong opponents, we step up our game. It was a battle to the very end, and we happened to come out on top this time. It was great volleyball between two evenly matched teams that run a balanced offense.”Rice recorded season-highs in kills (83) and assists (81) with three players posting double-doubles. The C-USA Setter of the Week, sophomore setter Madison McDaniel, set a career-high 70 assists in addition to notching 12 digs. Junior outside hitter Leah Mikesky led all players with 21 kills (.280) complemented with 16 digs, and senior outside hitter Noelle Whitlock achieved a match and career-high 24 digs while also contributing 16 kills (.231). Whitlock also eclipsed 1,000 career digs late in the third set and became the 16th Owl in school history to reach such a feat.Whitlock said the achievement helped propel the team to victory.“I think [this achievement] helped me realize that this is going to be a big win,” Whitlock said after the match. “That would make that day so much better, just having both this win and 1,000 digs.” Rice took the first set 25-23 without ever trailing and held Western Kentucky to a .222 hitting percentage. The Owls never trailed in the second set either, winning 25-21 and led by as much as seven, maintaining a match-high .465 kill percentage. However, the Toppers rallied from behind to take the second and third sets 25-22 and 25-23, respectively, to force a deciding fifth set. The Toppers jumped out to an early 4-0 lead in the fifth set, but the Owls responded with a 7-1 run and never looked back, winning 16-14 to complete the upset.Rice now prepares for their upcoming road games against the University of Texas, San Antonio on Wednesday at 6 p.m. and Marshall University on Sunday at 12 p.m. UTSA sits just above Rice at second place in the Conference USA standings, while Marshall is in eighth place with an even 6-6 record.