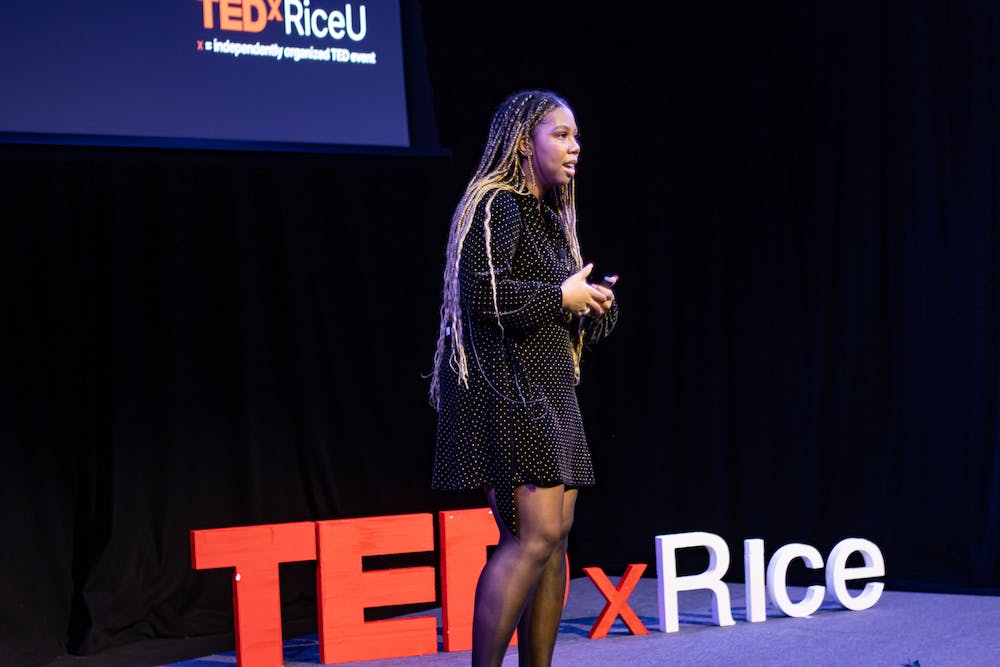 TEDxRiceU held its Countdown event this past Saturday, focusing on combating climate change. The event, composed of six talks given by both faculty and students, addressed the issue of climate change through wscientific, technological and social perspectives, according to TEDxRiceU President Nicholas Ma.

The event was sponsored by both the Rice Environmental Society and the Rice Green Fund, a part of Rice Sustainability. Richard Johnson, executive director for Rice Sustainability, said that he hopes that attendees will leave this talk thinking about solutions to climate change.

“Despite the enormity of the challenge of climate change, we have the opportunity to implement economically viable solutions now that will help us to avoid a planetary climate catastrophe and that will also contribute to a healthier, cleaner, fairer and more economically robust society,” Johnson said.

Marina Klein, a member of RES, said that the different perspectives highlighted in this talk will make it relevant to a wider audience.

“Everything you could think of is a part of climate change. Having these talks given by people who are from all sorts of disciplines [and] backgrounds helps to show how relevant it is to everyone who’s listening,” Klein, a McMurtry sophomore, said.

After a brief introduction, the event was kicked off by Dr. Sylvia Dee, an assistant professor in Rice’s earth, environmental and planetary sciences department. Her talk focused on the urgency of climate change and how to approach it, both in terms of solutions and discussion.

Dee said she hoped that people would leave her talk knowing that climate change is solvable.

“It doesn’t really matter what you study or what you care about. You should expect to be impacted by climate change,” Dee said. “We need all hands on deck, and so now it’s not the time to become apathetic. Now is the time to charge all of the students with thinking about solutions, and how they might be able to contribute to solutions via their own careers using their own skill sets.”

Dee was followed by Jack Pearce, a McMurtry junior, who spoke about the different technologies being developed for climate change.

“We are at a point in technology and research where we’re starting to see people piecing together these large conglomerated systems into even more extensive tools that people can use [to learn about climate change],” Pearce said. “There’s a role for data and systems within here, and that role is empowering.”

After Pearce, Shikhar Verma, a junior from Duncan College, and founder of the Rice New Energy Fund, spoke about the financial effects of climate change, based on his experience in RNEF.

“I think there’s a lot of ways you can [look at climate change]. You can be really anxious and say, well, it’s gonna get warmer, and things aren’t gonna get better,” Verma said “Or you can take the view that I tried to take, which is that there’s this huge challenge, and humanity’s always risen up to this challenge.”

A cappella group, Chimes, performed after the 15-minute intermission, which was followed by Taylor Gilliam, a senior from Sid Richardson College. Gilliam’s talk, which also included poetry, focused on the social aspect of climate change, including how it plays into the conversation of topics such as race and gender.

“There’s certainly urgency within the climate situation that we are in today, and what concrete changes need to be made through not only our infrastructure but the critical consciousness that our communities and our society has towards climate issues,” Gilliam said. “I’ve tackled different social injustices related to race or to gender or to sexual orientation or whatever else in the world. I can’t do any of that if the Earth is on fire, right?”

Gilliam was followed by Andrew Slaughter, the former executive director at the Deloitte Center for Energy Solutions, who spoke about the impacts of greenhouse gasses.

“Methane is the second biggest source of greenhouse gas emissions, but it also causes a more potent greenhouse effect than CO2,” Slaughter said. “If you concentrate on cutting back methane emissions, now and in the next few years, you kind of buy more time to deal with the CO2 problem.”

The event closed with a talk by Daniel Cohan, an associate professor in civil and environmental engineering. Cohan, whose talk was based on his book, “Confronting Climate Gridlock,” said he hopes his talk will address the steps needed to address climate change and give people hope despite the gravity of the situation.

“The actions that we take not only reduce our own emissions, but they can catalyze the growth of clean energy for many of the most pivotal technologies. The more quickly we deploy them, the faster their costs can drop,” Cohan said. “If we address this challenge in the right way, we can actually have a future that in many ways is better than the world that I grew up [in].”