FB bests UTEP in shootout, needs one win for bowl 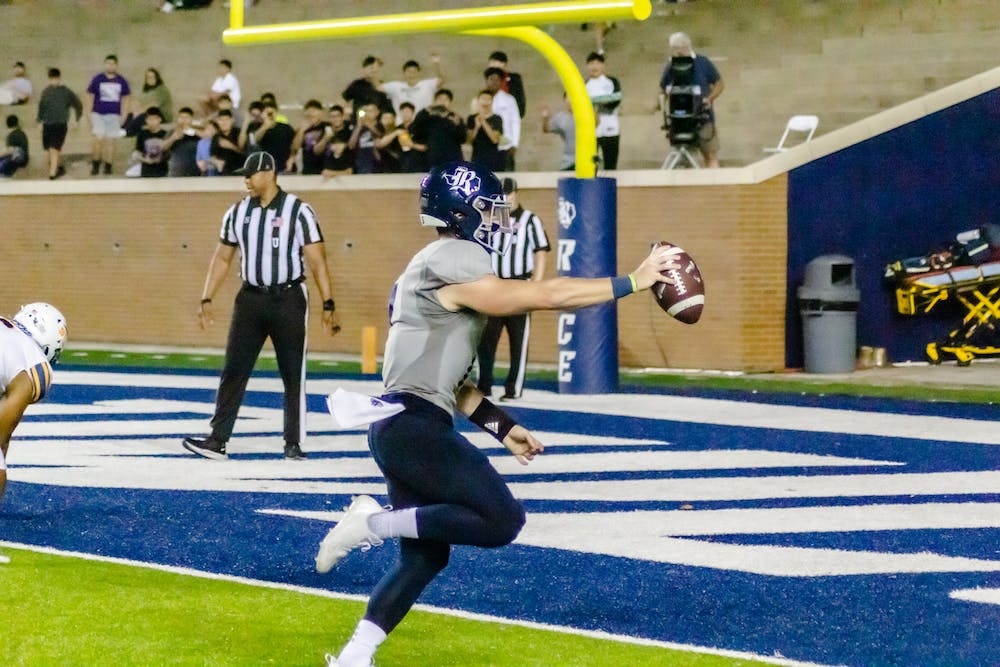 Rice football beat the University of Texas at El Paso 37-30 on Thursday thanks to a last second touchdown pass from junior quarterback TJ McMahon to senior wide receiver Bradley Rozner. The win improved the Owls to 5-4 on the season, one win away from securing a postseason berth with three games remaining in the season. According to head coach Mike Bloomgren, this win was crucial for the team, especially on a short turnaround after their disappointing loss to the University of North Carolina at Charlotte.

“The way that they approached [this game] was the only way we could,” Bloomgren said. “We had to move forward … to be able to handle all of the things that this UTEP team presents with only one real day of physical practice. My hat’s off to these guys for the way they worked.”

The game was a back-and-forth battle between the Owls and Miners, as neither team ever held more than a one touchdown advantage. Rice racked up 284 yards of offense in the first half, scoring on four of their five possessions. But their one scoreless drive ended in a McMahon interception that the Miners were able to convert into a game-tying touchdown late in the second quarter. The second of three field goals from graduate kicker Christian VanSickle gave Rice a 20-17 lead heading into halftime.

The second half was more of the same; both teams traded blows late into the fourth quarter, and a UTEP field goal tied the game at 30 with 2:35 left on the clock. McMahon and the Rice offense moved the ball 52 yards to the UTEP 23 yardline in two minutes and five seconds, before calling their final timeout with 30 seconds remaining. On the next play, McMahon found Rozner in the back corner of the endzone for the game sealing touchdown.

Rozner said that he was able to take advantage of the Miners showing a similar defensive coverage to the play before the last-second touchdown.

“We were in the same formation the play right before, [and they gave us] almost the same look,” Rozner said. “I just gave the corner an inside move and took off. TJ put the ball up there and [I] just made a play.”

McMahon finished the game with 334 passing yards and three total touchdowns (two passing and one rushing), and Rozner led Rice’s receivers with six receptions for 142 yards and a touchdown. On the ground, redshirt senior running back Cameron Montgomery and redshirt junior running back Juma Otoviano received a relatively split workload. Montgomery, who saw most of his touches in the first half, rushed for 59 yards and a touchdown on eight attempts. Otoviano, who was favored more in the second half, rushed for 65 yards on six attempts.

According to Bloomgren, the transition from Montgomery to Otoviano was a matter of game progression, and the team plans to rely on both running backs in the final stretch of the season.

“Cameron’s explosiveness is something we love to have,” Bloomgren said. “But as the game went on, I didn’t feel like Cam was seeing the game as well … so we started leaning on Juma a little bit.”

Needing one more win to ensure bowl eligibility, the Owls face a challenging end to their schedule. Their next match-up will be on Saturday, Nov. 12 on the road against Western Kentucky University, currently the third place team in Conference USA. From there, they will host C-USA leading University of Texas at San Antonio before ending their season on the road against the University of North Texas.

“We have everything that we want right in front of us,” Rozner said. “We just have to take it one game at a time.”