Nightmare on South Main: Football blown out by last-place Charlotte on Homecoming 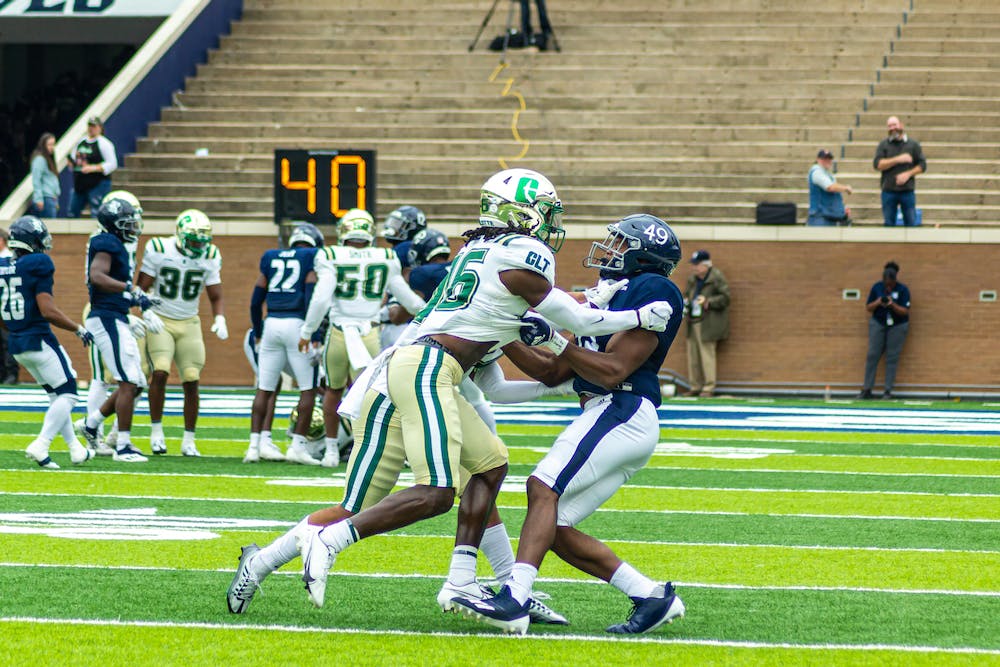 In the true spirit of Halloween, Rice Stadium resembled a haunted house with proverbial carnage all over the field following Saturday’s loss. Going into the game as 15 point favorites against the last-place team in Conference USA, who had fired their head coach six days prior, all indications pointed to the Owls celebrating Homecoming with a resounding win. But not only did the University of North Carolina at Charlotte spoil the Homecoming festivities, they did so with a 33 point victory, defeating the Owls 56-23. Head coach Mike Bloomgren was very disappointed with the loss after the game.

“I’m incredibly disappointed that this game went the way it did today,” Bloomgren said. “As much as last week was a team win for us, this is a team loss. They took us to the woodshed today. We earned this loss every bit as much as Charlotte earned this win.”

Going into the weekend, Rice was looking to extend their four game home win streak. But the Owls’ Homecoming curse had other plans. According to Bloomgren, what made their fifth straight Homecoming loss even worse was doing it in front of family and friends.

“This is [redshirt senior defensive end] Trey Schuman’s sixth year here and he’s never won a homecoming game,” Bloomgren said. “It sucks because I thought we had really good attendance today and I thought we owed our fans a better product. It stings a little more on Homecoming because we had fans in the stands that cared and we wanted to put on a good show for our friends, family and the people we love.”

On the opening drive, the Owls looked like the same team that scored 42 points in the last 35 minutes of their overtime win against Louisiana Tech University, with an 82 yard drive ending in a touchdown pass from junior quarterback TJ McMahon to sophomore wide receiver Luke McCaffrey. Later in the first quarter, McMahon found the back of the endzone with senior wide receiver Bradley Rozner. After taking a 17-14 lead in the second quarter, the game went south and Charlotte rattled off 35 straight points in an offensive frenzy. The driver of the train was Charlotte quarterback Chris Reynolds, who put up five touchdown passes compared to just three incompletions. Bloomgren said that going into the game, Charlotte’s offense was a concern.

“We knew that they are a very very talented offense,” Bloomgren said.  “They really haven’t put it together this year but they did today so I think their coaching staff did well pulling everybody together and their players made plays.”

Defensively, the Owls struggled, allowing 239 yards on the ground and 275 yards through the air. According to Schuman, one key that led to Charlotte’s offensive success was converting on third and long.

“That first quarter we went out and we played our brand of defense but later,  we weren’t getting the stops and weren’t getting off the field,” Schuman said. “This game is a momentum game. [If] we don’t give some of those third downs up and we get off the field, the momentum shifts.  Especially with a great quarterback like Reynolds, when you let that guy get rolling, he can put up points. We just didn’t do our job at the end of the day.”

The Owls have a quick turnaround as they return to the field on Thursday, where they face the University of Texas, El Paso. Looking to bounce back from the disappointing loss, Bloomgren hopes that the team can wash the sour taste from their mouth with a win.

“I still think we are a scary football team with very good players,” Bloomgren said. “Trey Schuman said something to the team as he broke them down: ‘thank God we get to play on Thursday and we get to take that get this taste out of our mouth,’ and I fully agree … Nothing has changed based on the way we played today or the outcome of this game. There are things we have to get fixed but nothing in terms of my belief in this coaching staff or this team has changed.”

Regardless of the loss, the Owls find themselves at 4-4 with only two wins away from becoming bowl game eligible. But with only four games left on their schedule, including three against teams at the top of the conference standings, the opportunities are dwindling. According to Schuman, the team, who has played some great football this season, is ready to face the challenge with a new fire burning inside them.

“We have four games left,” Schuman said. “This [loss] wasn't the end all be all of our season … We're going to put this one to bed and we're going to focus on UTEP … There's going to be a chip on our shoulder and there's nothing scarier than a football team with a chip on their shoulder, if you ask me.”