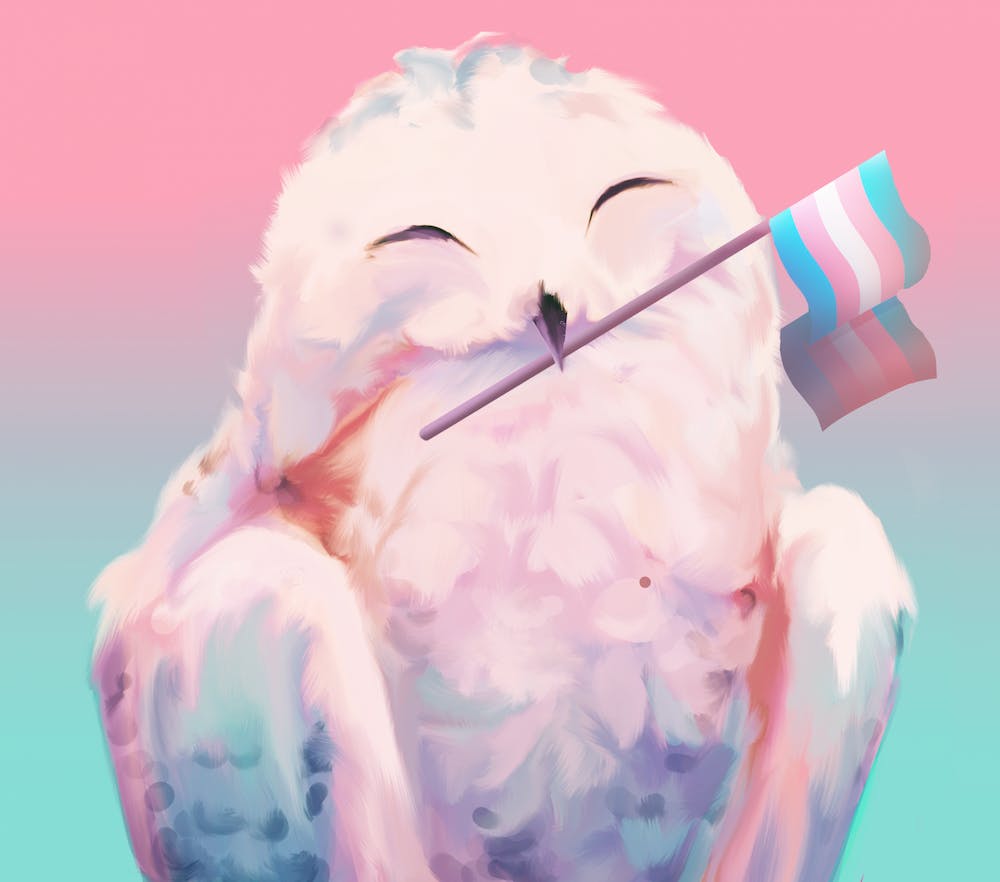 Editor’s note: A student interviewed for this story was given the option of remaining anonymous due to currently pursuing restorative justice with another student. The anonymous student was given a false name, which has been marked with an asterix on first mention.

What is community? For Marina Klein, it’s little queer people in your phone, chatting and exchanging compliments and advice in a GroupMe.

“[People in the group chat are] so supportive … they’re always there for you when you need them to be,” Klein, a McMurtry College sophomore, said. “You can be there for them when you have the time as well, because that’s how community works.”

From housing assignments, to using the bathroom, to the name on a student ID, some everyday aspects of the Rice experience come with additional challenges for transgender students at Rice.

For Klein, being away from Rice over the summer gave them the time and space to reflect on their gender. When they returned to Rice for the fall semester, they said that they felt like they were having to “re-meet” people while actively redefining themself.

“I [thought] this kind of makes sense as to why I was struggling so much last semester [and] didn’t feel myself — it’s because I wasn’t seeing myself,” Klein said. “I realized that I didn’t really have time for that [reflection], or like the mental capacity for that at Rice … It’s almost like you don’t have time to be queer, if you don’t already have your stuff figured out, which most of us don’t.”

While coming out has been awkward at times, Klein also said that people have largely reacted positively, though they wish conversations about gender and pronouns would be more normalized.

Cleo Thompson, a Martel College senior, began openly identifying as non-binary at the start of their junior year.

“I didn’t really start going by Cleo or being a little bit more gender nonconforming in how I dress until near the end of junior year,” Thompson said. “As a first-semester senior, that is still very much a recent change, so obviously I still run into plenty of people that I knew as a freshman [or] a sophomore who still call me by my dead name or just do not recognize me, which is dandy, because then I get to reintroduce myself.”

Before coming to Rice, Charlie Maxson said that they found out that they were placed in Jones College – a college that didn’t have many gender-neutral bathrooms.

“Then [someone] calls me and … gave me a choice to move out or not,” Maxson said. “I [moved out of Jones], so now I have a single [at McMurtry], which is awesome … My first impression [of Rice] was ‘Wow, they actually care, at least enough to call me and ask [if I wanted to] move.”

Artie Throop, a Jones College sophomore, said that there was discussion about creating gender-neutral bathrooms at Jones but that nothing has come of it at this time.

“It’s been a thing for years … but queer people are still spending a lot of time and energy on this,” Throop said. “We should have our bodily needs taken care of easily and be able to move on to more complex issues.”

Quinn* said that he moved off campus this year after dealing with a transphobic roommate. Quinn said that they and their roommate talked about their gender and the pronouns they used — exclusively they/them pronouns at the time, and now he/they — before housing jack in the spring. While his roommate said it “should be fine,” this changed soon after his roommate moved into a shared house over the summer.

“The first weekend, she was like, ‘We need to talk about your pronouns. I had been thinking about it,’” Quinn said. “Basically, she was like, ‘I can’t affirm your identity. I can’t use your pronouns. I can’t use your partner’s pronouns,’ who is also non binary. I remember she used this metaphor about how I was running off a cliff towards hell and [that] she would not stop trying to save me from running off the cliff.”

When Quinn went to his magisters about the situation, they were told there were two options: having someone switch housing assignments with them or moving off-campus. Quinn said that he felt uncomfortable asking someone else to move into what they felt was a potentially unsafe living situation. He said that the only help that their magisters provided was with communicating with Housing and Dining about waiving the fee for breaking his housing contract.

Quinn is now trying to pursue the restorative justice process with the person who was originally meant to be his roommate. When he returned to campus, they reached out to the SAFE Office for support, a resource that he later learned could have helped him with on-campus housing if their magisters referred them.

“Trans students are protected under Title IX, and we encourage them to come to The SAFE Office for help with support and accommodations,” the SAFE Office wrote in a statement for the Thresher. “The people on our staff are well trained allies who are always ready to help students with their needs. There is also a webpage dedicated to resources at Rice, as well as a guide — created mainly by students with staff support — that includes more information and referrals for resources in and around the Rice community.”

While they were able to have many Rice systems reflect their chosen name, Cleo Thompson said that they have struggled to change their name in some Rice systems, especially without having legally changed their name — something that they said can be a difficult process, especially in Texas.

“The information you enter Rice with is so immutable that it really becomes a boundary … so much, both [academically and [socially], even OwlNest really depends on that information,” Thompson said. “Once it is in the system, it really feels like you can’t really call it back.”

Multiple students who spoke to the Thresher mentioned being misgendered by faculty and staff. Some also reported that their previous names still appeared in certain Rice communications and portals and would occasionally revert on their emails.

During the previous semester, Moth Almazan said that the debate around the Student Association resolution to denounce Rice swim coach Seth Huston was a difficult, harmful process for him and other trans students he knows.

“I would really walk out of [Senate] crying like so angry, because I didn’t think those kinds of attitudes existed at Rice,” Almazan, a Duncan College sophomore, said. “But of all the places I tried so hard to get out of I was so hopeful that maybe someone would understand.”

Through these difficulties, all of the students the Thresher spoke to talked about how queer and trans community improved their Rice experience to varying degrees. Almazan found community in a trans studies class. Thompson said that Rice’s theatre community was an important source of queer, trans and non-binary community for them. Thompson said they have benefited from the experiences of other students in their struggles navigating Rice.

“Being trans is not always a happy thing,” Thompson said. “Definitely ever since I’ve really started trying to change my appearance and change how I am presented, I cannot change people’s perceptions of me … But having that community, knowing that I am not alone, that there are people with my life experience very much going through [the same experiences] … doing their best to have a full life … really means the world to me.”