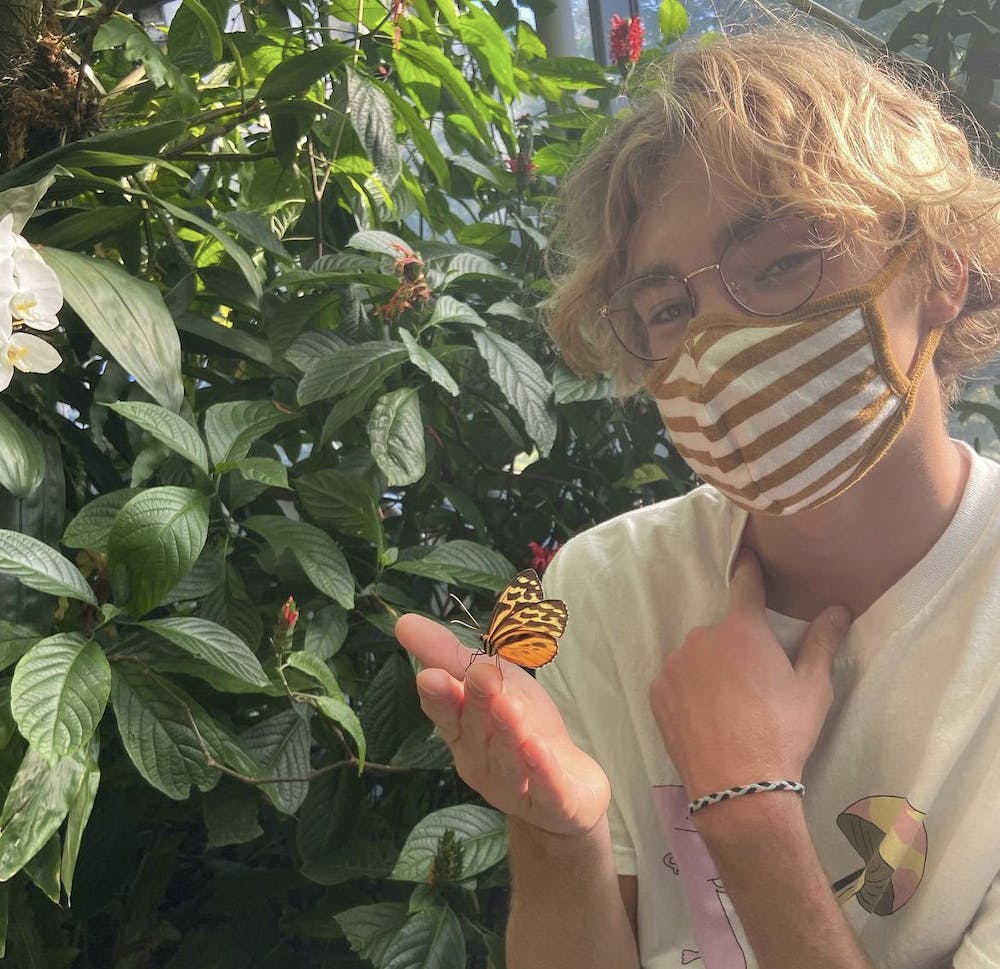 When Ryan Dullea visited the Cockrell Butterfly Center with their friend, they sat on a bench for nearly two hours. As they watched the butterflies’ wings flutter around them, they talked about biology, the beauty of life and what they wanted from their time at Rice. As they sat, each of the butterflies landed on Ryan, pulled towards them just like the many people in their life.

“We were so hopeful,” Rija Naqvi, a Jones College sophomore, said. “Obviously all of the butterflies land on Ryan … The butterflies loved Ryan. I was like, ‘Ryan, save some for the rest of us’ … Their face just lit up.”

Ryan Dullea, a Jones sophomore, died on Oct. 4 at the age of 19. Ryan was an Orientation Week advisor, worked as a Rice Outdoor Program and Education trip leader, a member of the club water polo team and the Jones kitchen committee head.

Ryan and Naqvi met during their freshman year of high school and became friends instantly. When they applied and decided to come to Rice together, they made each other photo albums, filling the pages with photos of their time together and leaving space for the time ahead of them at Rice.

“It was just lucky,” Naqvi said. “Ryan was a competitive swimmer and was constantly eating, and I’m not just saying that, literally constantly eating. It was like whole carrots, just raw vegetables in the middle [of our precalculus class]. So you’re hearing crunches behind you in precalc, and you’re just, like, ‘Who is the strange child behind me?’ Ryan was eating and not really ever paying attention to the board, because they didn’t have to … So I’d have to turn around and get explained precalc by this vegetable cruncher. After that, Ryan and I were just together, always.”

Ryan’s sister, Ellie, attended Rice, and Navqvi said that Ryan always knew they wanted to come to Rice. When Navqi and Ryan found out that they would attend together, they immediately started planning the places they would visit together, using Ryan’s sister’s list of Houston-area recommendations.

“[Applying to Rice] just became an us thing – something we got to do together,” Naqvi said. “Ryan was so excited when we found out that we got to go together. We just began planning after that, like everything we [would] do together.”

Ella Seigel met Ryan on the first day of O-Week, when their O-Week group was gathering around a sign and the two made eye contact with each other. Seigel said Ryan was her first friend at Rice and ultimately became one of her closest friends.

“We started talking, and I don’t think we stopped talking for an entire week,” Seigel, a sophomore from Jones, said. “They were just an immediately comforting presence to me, and someone I could always count on and who would always be in my life.”

Seigel said Ryan had the unique ability to make everyone smile and bring joy to those around them. She described them as both being able to be goofy but also create much deeper connections.

“Ryan was a light,” Seigel said. “They were able to put other people at ease. No matter what was going on in their life, they were always a person for those around them.”

Nishanka Kuthuru, a Jones sophomore, said that Ryan was a friend whom she always felt close to even when they went days or weeks without spending time together. Ryan was one of Kuthuru’s first friends at Rice, though she said she couldn’t remember how they became friends – it seemed as though they had always been friends.

“I could just pull up to their room and give them a hug if I’m sad,” Kuthuru said. “And we don’t talk about it. It was easy. We were close, but we didn’t have to hang out all the time to be close.”

Kuthuru said that Ryan was the first person to see her when she moved back on campus, rushing to tell her hello and give her a hug as soon as her parents left. Her and Ryan would greet each other enthusiastically whenever they saw each other.

“Every time we would see each other across campus, they would yell my name from so far away,” Kuthuru said. “We would … make a weird pose and then [there was the] penguin [walk].”

Naqvi said that Ryan was a “bright presence” whether when supporting their friends or just being silly.

“Ryan would constantly try to convince me that gas isn’t real,” Naqvi said. “They were like, ‘Have you ever seen gas come out of the pump? No, you haven’t. Those videos that you see of the trigger getting stuck is just gas propaganda that Exxon wants you to think is real. Really, Rija, why are you spending money on gas?’ … But the crazy part is Ryan kept getting gas themselves.”

Ryan was a cook – Naqvi said that they used to cook for their friends, many of whom were not the best in the kitchen themselves. Ryan was able to connect with Seryna Ayala, their friend and summer roommate, through this hobby of theirs.

“I was super clueless about cooking before the summer, so they taught me [how to cook],” Ayala, a Jones sophomore, said. “They also introduced me to the importance of having produce [in the kitchen], because I was just absolutely helpless.”

Olivia Roark, also a sophomore at Jones, lived across from Ryan on the third floor of Jones north. The two, Roark said, would pass each other every time they went to the bathroom, and in combination with attending a class together, they soon became close.

Last spring, Roark and Ryan went on a backpacking trip together, a memory that has stuck with Roark since.

“Ryan bought their hammock and convinced me to bring my hammock, which actually was a gift for my birthday,” Roark said. “We originally were going to tent together but that didn’t work out so we put our hammocks up next to each other on cross trees, and we were just happy to be co-existing in separate hammocks, but close by to each other. That was a really peaceful moment.”

Roark emphasized Ryan’s generosity and “beautiful” ability to connect with people in the way that each person needed them to.

“Ryan was the person that everyone needed them to be,” Roark said. “Each person had a version of Ryan that was exactly the presence they needed in their lives. [From] generosity in physical things, like literally anything you would need … to really a worldview [which] they were so happy to share.”

When Zachary Ball became the new Jones magister, he said that Ryan helped him to feel more connected to the college as he adjusted to the role.

“They worked on my floor in a research lab this summer … and I saw them from time to time,” Ball said. “They were one of the people I latched on to, that I had a connection with as a brand new magister … [They were] a comforting presence to interact with … at a time when I felt kind of alienated.”

Elise Sibley, a Wiess College sophomore, met Ryan in her chemistry class freshman year. Elise, Ryan and two others in the class grew closer through their shared queer identity. Sibley would often go to Ryan for help on chemistry homework.

“At first, it was the fact that they were an absolute genius. Like I knew Rice had smart people, but they were another level, like scared-me levels of smart,” Sibley said. “So originally I went to them for help with [chemistry] homework. But they were also one of those really cool magnetic people where you are like, ‘I really want to be friends with them.’”

Kasey Yearty, assistant Chemistry professor, had Ryan in several classes. She said Ryan will be remembered as a shining light within the Chemistry program.

“In my classrooms, Ryan was the first to say ‘Good morning’ and greet you with a smile,” Yearty said. “We often came across each other as we were both walking to Dell Butcher Hall, walking the rest of the way together while we chatted about our days. When our paths to class did not cross, Ryan always made a point to stop and speak or wave as they passed my office door.”

Growing up together, Naqvi said she was able to watch Ryan fall in love with chemistry.

“Ryan sees the world in terms of chemistry, like you’d be talking to Ryan about feelings or the way something tastes and they’d be like, ‘It’s just the chemicals in your brain telling you that,” Naqvi said. “All through high school, Ryan was a competitive swimmer who would always just have chlorine seeping from their pores. They’d lick the back of their hand and … be like, ‘Smell my chlorine-rich body.’”

Seigel said that Ryan taught her to always tell people how much they mean to her and to appreciate those around her for the time she gets to spend with them.

“I am so appreciative of the impact they had on my life and I wouldn’t be who I am without their influence and the memories we got together,” Seigel said. “You never want to be left wondering if they knew how much you cared and how much you loved.”

Sibley said that Ryan taught her not to take people for granted and that some people will be in your life forever in their own ways.

“You will always remember your experiences and your conversations and just the way they made you laugh,” Sibley said. “Before knowing Ryan, safe spaces for me were my bedroom [or] a certain teacher’s classroom. Even though Ryan and I’s [interactions] were in the same physical places, those places were not what felt safe to me, it was them as a person.”

While the world seems like a scarier place right now without Ryan, Naqvi said that she is grateful for the time she had with them.

“All of my memories and all of my life has been Ryan, really, for the past six years. It’s hard to sum it up,” Naqvi said. “This world just feels like a worse place [without them] … But I think in the long run and in the way Ryan touched me, I’ll always see it as a beautiful place … because it gave me [Ryan] for a little while.”